Hey there, I’m 54 and just started lifting for the first time in my life. Jan 2017 I made the new years resolution to STOP being fat, and to get in shape. I lost 50 pounds between New Year’s and July 1, which completed part one of my resolution, but then I procrastinated for a while before getting my lazy butt to the gym.

I have a friend at work who is noticeably fit (large arms, large neck, veins always show) who recommended “The Complete 4-Week Beginner’s Workout Program” from the Muscle and Fitness website. It has been hard work but I’m almost done with my 3rd week and feeling good about things. We sat down and put together a sensible program for the 8 weeks after I complete the one I’m doing, and I’m excited about finishing the program I"m on and going on to start the next one. And the next, and the next… I intend to make it a lifestyle change. Instead of sitting on the couch neglecting my body every day after work, I’ll hit the gym 4 days a week and feel good about myself.

Seems like maybe I just haven’t trained my nervous system to push my muscles very hard yet or maybe because I’m old or whatever, but when I finish lifting I don’t feel very tired out.

A couple days ago I got the bright idea to do some rowing to burn off the rest of my energy. And boy does that work! I set the machine for max resistance, warm up on the machine for one minute, then sprint as hard as I can for 20 seconds. Then keep rowing gently while recovering up to the 3 minute mark and do my 20 seconds again. And sprint again at the 5, 7, and 9 minute marks. The machine says over the 10 minutes I spent rowing, I burned off about 100 calories. I don’t know if that qualifies as any kind of aerobic or HIIT thing at all or if it’s just too short to even be anything.

I have always been short of endurance and easily winded and I feel like the rowing has some good potential to help me with those issues. Also being a whole body exercise I feel like it’s better for me than the treadmill or stationary bikes.

What I’m really wondering though is if the way I’m rowing is useful in any way or possibly counterproductive to any muscle gains I’ll see from lifting weights?

That’s pretty similar to something I used to do on the stationary bike. Did it for maybe six months, no negative impact I could tell.

A big thing to bear in mind is that the effectiveness of a training system isn’t how tired you get after training but how much you have improved what you’re trying to improve over time.

Is great that you’ve started lifting and congrats on the weight loss you’ve done more already than most people ever manage to do. Once you start asking questions about how to make your training better and learning it’s hard to stop. Good fun tho.

Throw “Stronger by Science cardio” into google and the first few results should answer your questions.

What I’m really wondering though is if the way I’m rowing is useful in any way or possibly counterproductive to any muscle gains I’ll see from lifting weights?

yes and no, are the respective answers to your questions.

Congrats on the weight loss so far.

Nice, thanks guys. Forgot to mention that I’m 6’0" tall and went from 220lbs with a large belly to 170 without. I also lost a lot of muscle, which I regret but what’s done is done and I’ll just have to train hard to make up for that mistake. I’d say at this point I have lost enough weight and want to work on gaining a bit in the right places.

I read up quite a bit on the “Stronger by Science cardio” stuff but most of that stuff flew about 1000 feet over my head. It’s hard to really absorb a lot of new info when you have to google every other new term you run across (most of them, lol). I’ll have to be sure to reread those articles periodically as I become more familiar with the whole weightlifting scope.

yes and no, are the respective answers to your questions.

Thanks a million for that. Short answers are great answers for this super newbie

Thanks a million for that. Short answers are great answers for this super newbie

Rowing is probably the best all round cardio exercise you can do. If you havent already, search youtube to learn proper technique. Have you had a look at the ‘Starting Strength’ training program? If not, you should. Well done for trying to make a change in your lifestyle and for the progress you’ve already made

Are you timing your rest between sets? If not that could explain why you’re not “tired” after your workout. I can’t see where rowing will effect you negatively.

I checked out the Starting Strength program which is mostly body weight stuff. Nothing wrong with that at all, and my first little bit of a start toward getting in shape was with push-ups. I did my first baseline set and pulled a muscle in my back which delayed EVERYTHING for about a month while that healed up.

During that time is when my friend put me onto the weight program that I had mentioned in my first post. He’s not only a strong and buff looking guy, but he’s a smart guy so I have a ton of respect for him and when he said “try this program”, I threw myself into it.

I also checked out some rowing videos, looks like I’m ok on form there.

Are you timing your rest between sets? If not that could explain why you’re not “tired” after your workout. I can’t see where rowing will effect you negatively.

I time my rests but not super closely. I glance at the clock after each set and go about a minute or minute and a half between sets usually. Today, maybe because it’s Saturday and I went in the morning instead of my usual afternoon workout, I was pretty worn out after the weights. I didn’t check the clock as much and felt like I probably shorted myself on time between sets. And maybe that’s what I should be doing anyway since my workouts are running well over an hour. Whatever it was, I was much too tired to hop on the rowing machine today.

He’s my planned workout for the rest of the year after I complete the program I’m on now. We reversed the reps from current example 8/12/12 to 12/10/8 which make all kinds of sense to me, and I added the rowing and planks. Seems like this should be fairly punishing but I want my newbie gains! And it’s probably going to be doubly hard because of my age and the fact that I’ve done basically nothing for more than 30 years, but I’m going to do this. I lost the weight, now I’m going to gain the muscle.

And I think it might actually be starting to work already? My friend said he could see a difference already but I told him he was full of it. Then I think I saw it a bit myself in the mirror today. Wishful thinking maybe, but it will definitely become real over the next several months to year I’m sure. 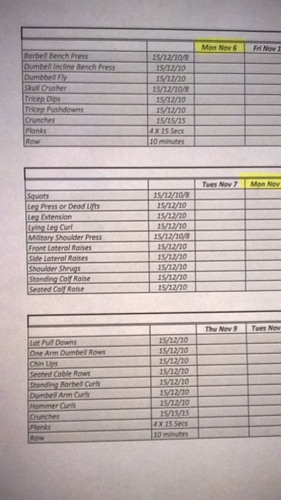 Congrats on the start. Starting strength by rippoetoe isn’t bodyweight it’s barbell exercises, you may have seen I different routine with the same name. I’m only in my first year of lifting but the first 6 months was on SS and I had great results. Your programme looks complicated to me, I’m still not at that level of complexity, I mostly do the big 6. Which are:
Workout A
Squat, bench, row
Workout But
Deadlift, OHP, chin ups

Edit.
If what you’ve got is working, then ignore me

I think I must have searched wrong or something because I hadn’t seen the Rippetoe stuff. And, newbie that I am, I might be way wrong but it seems that your workouts focus on building strength while mine are geared more toward size.

Since I haven’t in my lifetime so far had a situation where I was too physically weak to do something that I needed to do, I’m not too concerned about strength. I’m primarily interested in building a good looking body, and the additional strength that goes will that will mostly just serve to push larger weights to grow more muscle.

The program I’ve been doing seems to be working so far since I’ve been able to increase the weights a bit and my tape measure is telling me today that I have gained 1/4" on the biceps already. From a skinny 13" to a still skinny 13-1/4", but it’s a positive change already so I’ll be sure to keep at those curls, calf raises, tricep extensions etc. And the crunches and of course I keep up with my diet. I don’t know if I’ll ever be able to pull off a 6 pack abs but I’m going to at least try for it.

I don’t know that I’d pick that as a program either. Someone new to weight training will show a lot of progress by just being consistent in their training even though everything else isn’t quite right. I’m personally not a fan of things like tricep kick backs, leg curls, leg extensions, etc.
I would focus on multi-joint compound movements in the beginning of each workout and if you absolutely have to you could do all of that other stuff at the end.

Yes rower is great, maybe even the king for conditioning. These very effective and worth a try… 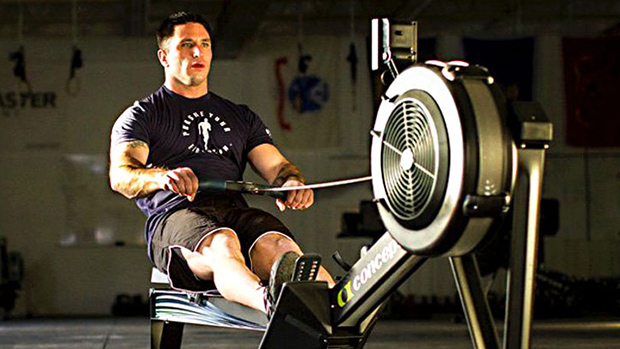 Interval Training on the Rowing Ergometer

The rowing machine may be the best conditioning tool out there for strength athletes. Here's how to use it.

No bueno if over 35 let alone 50, -potential to really piss off your back over the long term. I’m going to presume your using a concept II type machine but regardless put he resisitance to between 5 to 6(level 7 absolute tops). Warm up 4+ mins super gentle also

I have dropped the rowing completely with this new program since I’ve been too pooped to party after doing the lifting.

I went and bought a watch with a second hand and have been holding myself to 1 minute max rest between sets. That sped me up quite a bit, I think I was resting 2 minutes or more. I also have been adding a bunch of drop sets so I’m moving a lot more weight over a similar time period.

The program may be a bit complicated but seems to be working so far. Feeling good, have been increasing weight etc. This program will be finished at the end of the year and then maybe I’ll try something more “big 6” oriented. I like the looks of that.