Will all the lefty’s miss Olbermann? 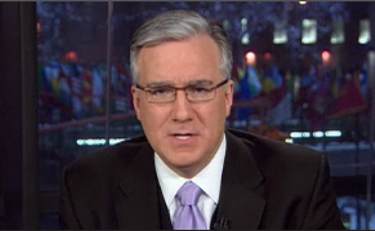 Olbermann Signs Off from MSNBC’s Countdown for Last Time

On Friday’s Countdown show on MSNBC, host Keith Olbermann announced that the episode would be his last, and spent a few minutes near the end of the show saying goodbye. He mentioned a number of infamous and pivotal points in his show’s history when...

2 years left on his contract at 7 million a year, wow. Wonder where he will show up next…

[quote]dk44 wrote:
2 years left on his contract at 7 million a year, wow. Wonder where he will show up next…[/quote]

He had a good liberal following. Moveon.org. and the rest of the crazy’s really loved him I’m sure he’ll do okay.

A quote from Marketwatch…

While he gave no specific reasons, Olbermann told viewers in a farewell message that “there were many occasions, particularly in the last two and a half years, where all that surrounded the show but never the show itself - was just too much for me.”

So, he created shoes that were too big to fill ?

Did he pick a fight with a bigger badder junkyard dog ?

Like Jack Nicholson as the Joker said in Batman, “never rub another man’s rhubarb…”

While they may deny it I think the new owners, Comcast may have had something to do with it.

Don’t get too excited. I hear his replacement isn’t any better.

Clearly this is all Bush’s fault…

Maybe the network finally realized just how unhinged from reality Olbermann really is and forced him to leave to get the real help he so desperately needs.

Now Olbmermann’s son Maddow can fill in another hour. You know he just LOVES to hear himself blather on about how much smarter he is than the rest of America.

I wouldn’t mind if Chris Matthews had a minor heart attack.

Stroke? Fall down a flight of stairs? Fall into a pit of gators?

That is an insightful prediction on your part. Ifnew owner Comcast is secretly cleaning the filth out of their new house then surely Maddow could soon go by the way of Olbermann.

They have and we are.

With all of the fantasizing that left wing political commentators have done in the past 10 years about how much different things will be when… only to find out how wrong they truly were, their “victory” has to be an ego smashing disappointment.

I could give two shits about Olberman or his opinions, but it is sad to see such deep disenchantment. I was watching Lewis Blacks most recent special a few nights ago. Politics aside, I really like the guy and think he is one very funny and poignant motherfucker. The dude looked like he was either going to drop dead or shoot himself in a state of complete and utter nihilistic disappointment.

My wife asked what was wrong with him, as she usually likes his humor too. I responded that it appears that all of his hopes and dreams have been shit upon by political maneuvering. 30 seconds later, he confirmed exactly that, and with the same eloquence.

I think that for a lot of these people, their dream has turned into a complete nightmare.

Just remember that “the party of tolerance” has done little different from demonizing their Conservative opponents. You have people like Maher who criticize the bashing of gays, yet promotes ideas of the lunacy of religion. And this is perpetuated by the Left ! You have a president who told everyone to tone down the political rhetoric yet suggested that people get in the faces of those who disagreed with his health care bill.

I am not saying the Right is any better, but this idea that only party is the hate-mongering propagandists from the Right is pure bullshit.

Thought Bernie Goldberg had a nice write up about Olbermann and his career at MSNBC.

Thereâ??s Only One Keith Olbermannâ??and Thank God for That!
http://www.bernardgoldberg.com/theres-only-one-keith-olbermann-and-thanks-god-for-that/

That is an insightful prediction on your part. Ifnew owner Comcast is secretly cleaning the filth out of their new house then surely Maddow could soon go by the way of Olbermann.[/quote]

Thats what I said around the first bush election…