Noob Questioning: What if?

I am a 20 year old male with a strong interest in power lifting wondering about my potential if I go on the gas. I know how much I hate reading unnecessarily long posts, so I will try to keep it as short as I can.

My situation: I can not go on the juice until I am at least 24, as I am currently a college football player and am piss tested almost weekly.

My Numbers: I am just a tad over 5’11’’ and weigh 242 (I am not a lean, mutant, veiny looking 242, however I am not fat. Most people do not think I look 240 plus lbs… and are surprised to hear my PRs probably due to my relatively small arms lol)

Many people have said that I am genetically gifted (When it comes to lifting weights), but my question is this: How elite are these numbers based on you guys experience with natural lifting? How strong do you anticipate I can get without gear? and If I were to hop on the sauce at 24, how much could I expect to gain?

I think that this is a great place to ask these questions, as many of you have probably had similar situations. Thank you in advance. 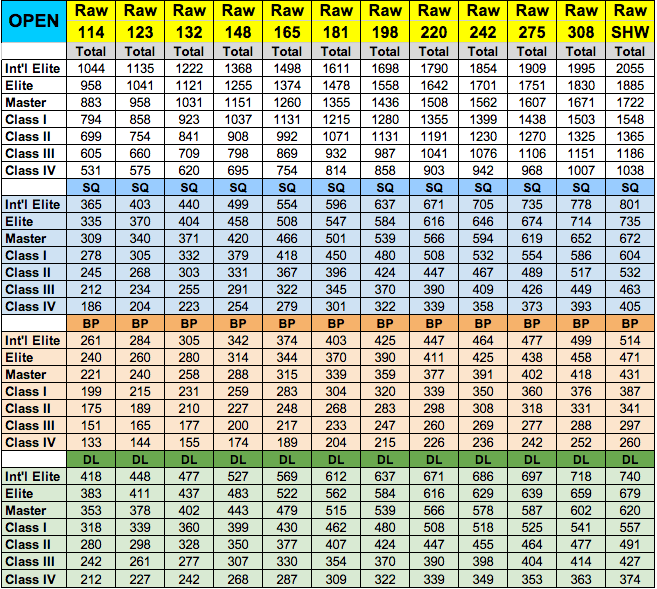 Much argument has gone back and forth on the subject of “what is elite?” in powerlifting. Fortunately, Kevin Meskew has given us […]

You didn’t say whether your squat was wrapped or not, but for the 242 class, your numbers are either already elite, or very close to it if the squat is wrapped. And that’s including lifters on gear, so obviously you’re very strong for a natural lifter.

There is A LOT of variability in terms of what to expect from steroids. It depends on a number of things, which include, but are not limited to, the following:

Obviously a lot of variables here, some not within your control. I’ve heard the number 15% thrown out there by a few people. That would be an average of 15% strength gains for people who essentially ‘maxed out’ their natural potential before turning to gear. My best guess would be that your absolute potential gains would be a higher number than this, mostly based on your age. It’s doubtful you’ve really reached your natural potential at this point, but perhaps you will have by the time you’re 24. Assuming your drug use falls in the ‘moderate’ range, I would guess you’d likely be able to add more like 20-25% to your lifts from where they are now.

This is not an exact science, so take it for what it’s worth. I think the numbers I’ve thrown out are reasonable enough.

Thank you. No wraps. I do not look to be a full time powerlifter… because I think there is more money to be made elsewhere with my education… But I want to be big and strong, so I would be pretty committed

I was wearing a belt, though… is that considered 100% RAW?

yea belt is raw. every fed allows it. so that would make you ‘elite’ already, if you can pull of these 3 lifts on the same day under meet conditions. wrist wraps are also allowed in raw lifting. those are about the only 2 things I can think of that are pretty much universally allowed in raw lifting. A lot of feds allow knee sleeves for raw, but some don’t.

There are very few people that are ‘full time’ powerlifters. I’m actually not sure if there are any, to be honest. Certainly no one is making a substantial income strictly by competing. Even the high level sponsored guys are doing something else for income.

In other words, you can be fully dedicated to the support, as much as anyone else is, and still have a day job.

How much do you think it would realistically cost for me to juice? I realize there are variables, but can you please answer for all of these possibilities?

Thanks for your help already

In the US, you can expect to be paying between 50 and 100 dollars for a 20mL vial of testosterone, concentrated at 250mg/mL. Most compounds will be priced similarly. Tren would be about double this amount (you could pay 100 dollars for 10mL, for instance). Let’s say 2 dollars per day of an oral, any oral. There’s variation, but not huge variation.

A strong first cycle would be 12 weeks of testosterone at 750mg/week, 6 weeks of d bol at 50mg/day, and I’ll add in 20 dollars worth of arimidex as your AI. The math on this ends up being between 200 and 250 dollars, approximately, for the entire 3 month cycle. And that would be a very nice cycle. So about 70 bucks a month.

A cycle that I would consider to be quite strong, but not insane, would be 1g of testosterone, 500mg of tren, and, say, 500mg EQ, for 12 weeks. I’ll also throw in an oral for the entire duration of the cycle. I’ll triple your AI dose. This ends up being 550ish dollars for the cycle, so 180 or so per month, assuming you get good pricing.

Things that can be added on to cycles would be peptides, insulin, GH, etc. Insulin is cheap, peptides are similarly priced to steroids generally, and GH has an enormous range, depending on sourcing, but will add several hundred dollars per month at least.

I would say Ross’s estimates are on the higher end, but of course it all depends on sourcing.

If you want to shoot for world records, you could potentially spend 5000 dollars a month on drugs or more. This could include something like 2g test, 1g tren, 1 g masteron, 1 g EQ, insulin, GH, an array of peptides, and half a dozen orals (d bol, anadrol, methyltren, anavar, etc)

sky’s the limit for cycle cost if you add in growth.

Moderate dose, test-only or test+oral cycles that I run usually cost me around £300, which includes all ancillaries and PCT

DONT FUCKING KILL YOUR NATURAL T AT 20 DUDE…not anyone can come back at 100% after a cycle…i dont think you want erectile problem at your age and anything that low test provided…your strong, keep this like that it wont make you rich anymore