No Matter the Problem, Abortion is the Solution!

Obviously, thatâ??s a tongue-in-cheek title, but it stems from two responses that were lately received through the Abort73 website. One comes from Africa and one from Nevada. One comes from a teenage girl and one from a man in his late 20â??s. One is personal and heartbreaking, and one is abstract and disjointed. But despite their contextual, demographic differences, both share a common theme. It goes something like this: the world is profoundly messed up; abortion is necessary to keep the peace.Hereâ??s the first one, from a 16-year-old girl in Africa:

This is my sisters story. We were living in our old village in Africa; she was 13 at the time. One night my mother, me, and my other sisters were out at the market. She was staying at home with my father and 2 brothers because my father wanted her to. She was the youngest and his favorite. While we were out, my brothers and father held her down and took turns raping her. She tried to struggle, but they just hit her. By the time my mother and sisters and me got home, they had covered up the evidence and threatened they would do it again if she told anyone. Two months later, when my brothers were at school and my father was at work, she started crying and would not stop. She told me, and I told our mother. She slapped her in the face and said she was a devil child. She told her to go and never come back. But I took her to the city and to the doctor. He told her she had AIDS and was pregnant with triplets. We both started crying. The doctor said he wouldnâ??t do anything more to help her. So I took her to the next city and we went to the doctor again. He said he wouldnâ??t giver her an abortion either. So we went back home and I convinced my mother to let her stay because she was pregnant and needed help. My father and my brothers beat her because she got pregnant. But as far as I know they did not rape her again. When she was giving birth, the first baby came out after she was in labor for 7 hours, and it was dead. The second one was also dead when it was born. While giving birth to the third, my sister was in much pain and was exhausted because she was so young. The third baby died and so did my sister. Four people died. Now me and two of my sisters are in the UK. If my sister was allowed an abortion, she would have lived.

There is nothing to make light of in this story. It is a tragedy from start to finish, but how is it reasonable for the surviving sister to place the blame for these deaths where she does?! Despite the violent, damnable behavior exhibited by her father, her brothers and her mother, she lays the blame for her sisterâ??s death squarely at the feet of the doctors who were unwilling to kill her sisterâ??s unborn children. She laments that four people diedâ??without reference to the fact that an abortion would have killed three peopleâ??violently and intentionally! And thereâ??s no guarantee that it would have â??savedâ?? her sister anyway. Aborting three children, that far along in pregnancy, carries life-threatening risks of its own. And even if an abortion would have prevented the strain of labor and delivery, would it have also prevented the ongoing physical and psychological abuse of her family? No, this young girl is dead, not for the lack of abortion access, but because her father and brothers raped her, impregnated her, beat her, and infected her with AIDS. She is dead because instead of receiving care and compassion from her mother, she was cruelly ostracized and dismissed. And she is dead because she lacked access to basic obstetric care. None of these problems are particularly easy to remedy, but neither can any of them be remedied by abortion. If anything, abortion enables such ongoing abuse by eliminating its most visible consequence.

The second web submission comes from a man in Henderson, NV. I generally correct for punctuation, but Iâ??m going to leave this one as is. May it remind us that the way we communicate is almost as important as what we communicate. Sloppy grammar implies sloppy ideas. He writes:

fact of the matter is that humans beings are not by any means innocent.Animals are . While every living being has the right to live , I will say thisâ?¦Animals donâ??t wage war on each other based on religion, race , or achieving total control of everything around them. Animals kill only to survive. More and more the world grows violent every day , as well as over populated because people who are not at all fit to be parents believe they SHOULD be , and they donâ??t consider the consequences of theyâ??re actions , They would rather live off wellfare than get a job , and teach theyâ??re children that nothing is out of reach, and that if told NO to just take it.They are taught that laws are meant to be broken.Iâ??v seen others leave it up to everyone around them to raise theyâ??re children for them and try as little as possible to take responsibility for theyâ??re kids. Humans are bred for violence. Do your research instead of trying to attack a good solution.If more mothers would take res!ponsibility and realize that they are not fit to be a parent yet , and then get the treatment for theyâ??re mistake, the world would be a better place. Who cares how sad someone is because they got it done? they should think of the consequences before having sex. If you donâ??t want a child, then either donâ??t have sex or take the necessary precautions.Donâ??t make your child suffer because you were selfish but not ready to give it the life they deserve.donâ??t make others suffer if and when because of this,the child turns to a life of crime or shoots up a school or kills some random person on the streets.thats someone elsesâ?? child. whats worse ? abortion? or life in prison at the expense of grieving families the child victimized, your own included? what about bullies?what if the child you should have aborted, bullies another to the point of depression and ultimately suicide? put that on your website. abortion is a solution.not to mention population control. all you have are bloody !images and sob stories.My wife is a school teacher of k-2nd gr! ades, and already at that age shes seeing the manipulation, the bad parenting , the bullies, as well as the victims.innocent? really? it starts with you, so do something about â?¦ this pathetic website!

I have much less patience for submissions like this than the first, but it is another example of the all-too-frequent tendency to make opposition to abortion a universal, cultural scapegoat. Between the two statements, abortion is held out as a solution to rape, incest, violent abuse, psychological abuse, pregnancy mortality, deadbeat parenting, overcrowding, selfishness, rule-breaking, dishonesty, laziness, government enablement, prison costs, school violence, bullying, depression, murder, and suicide. Did I miss anything? Basically, whatever is wrong with society would have been solved by now if weâ??d just aborted the right people! Such reasoning may sound absurd to you or me, but lots of people think this way, so how are we to respond? Shaking our heads or rolling our eyes isnâ??t enough. Neither is name-calling or ranting. We must be able to engage, and Iâ??ve found that the best way to engage is to simply ask questionsâ??until their duplicity in regard to abortion is exposed. The diatribe above offers lots of entry points. If you ever find yourself faced with similar arguments, here are some questions to ask. And if you find yourself sympathizing with his argument, then go ahead and answer the questions as well:

Following any of these questions down the rabbit-trail will almost certainly lead to the same conclusion. Eventually it will come out that your ideological opponent believes unborn human beings to be categorically different from born human beings. Once you get there, make him explain why he makes this distinctionâ??and have a working knowledge of prenatal development and abortion at your disposal. Whether he ultimately changes his mind or not, he will at the very least realize that his convictions on abortion are thoroughly confused and disjointed. Itâ??s easy to defend abortion in the abstract, but much harder when you actually have to justify the violent, intentional death of a living human beingâ??particularly when that human being is entirely innocent and entirely helpless. Not surprisingly, neither the submission from Africa nor the submission from Nevada says anything about the ethics of abortion. Neither tries to justify the act. Instead, they run us through the gauntlet of social ills, arguing implicitly or explicitly that abortion is a necessary remedy for each and every one. Do not be fooled. Any nation that makes unborn children its cultural scapegoat will not be long for this world. 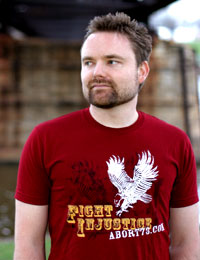 No Matter the Problem, Abortion is the Solution!

Obviously, that’s a tongue-in-cheek title, but it stems from two responses that were lately received through the Abort73 website. One comes from Africa and one from Nevada. One…