I am sure I am not the only one who loves testosterone tshirt. When I ride my bike with this shirt on, everybody turns heads! I would be happy to see T-mag come up with more varieties, like testosterone tank top, maybe wiith added tribal T on the back? what do you think? any other ideas about cool t-mag shirts?

I’d like to see a long sleeve T-shirt… same design would be ok, or maybe with the tribal T…

I also want a T-mag beenie, that would be the shit.

And a T-mag Hooded Sweatshirt would be badass too, something to throw on at the beach when the sun goes down…

A hoody would be great. Something on the sleave, and then the back, poss. the top of the hood.

-If your goning to do stuff for Vixens, look at the design of Lulu Lemon clothing. It’s funky and fit’s well.

-A beenie is a toque rite? Yes that would be cool. I have one I made! (Shhh)

-I think the site should offer a online clothing section. Allowing the other contributors to market their stuff too.
IE. Sicence Link shirts, Renegade wear, ect.

But make sure you do somthing for the Vixens.

How about a thong? You know, a T-back?

I’m not quite sure why Biotest doesn’t do this when clearly there is a demand for it. Probably has something to do with focusing exclusively on T-mag and designing groundbreaking supplements. If they don’t have the man power to add clothing apparel, then they should hire more people.

On a side note, I cycle my training shirts. Testosterone, T-nation.com, Biotest, Renegade, EFS shirts. That’s pretty much all I wear.

A t-back thong that says “testosterone”… that idea kicks ass,

we should all start a marketing team or something

A testosterone hoody (preferably the tribal T) would be fackin’ schweet…

This idea has been floating around before and from what I remember, the response was it was on the ‘stuff to do’ list.

I talked to Shugs about getting a T-Nation beanie, similar to the Renegade beanie, and he basically said that that was something he wanted to do and he has approached TC about it. I think if enough people post here, TC will see that the is demand for additional gear and maybe we can get some of this stuff.

I seriously want a T-Nation beanie with the new design on front and “T-Nation” on back. That would be the “bomb-diggity” or something along those lines.

I am in serious need of a black shirt with the red tribal T logo. All the other stuff sounds great too.

The sausage king of Chicago…would that be Abe Froman?

[Note: there was an “Abe Froman” posting on the old forum, many ages ago, who no longer posts under this screen name. We are not the same person.]

Was at the beach this AM with my dog wearing a cheesy Old Navy fleece, thinking to myself…

“damn it would be cool to have on a Testosterone sweatshirt 'bout now.”

You guys MUST get us some T-gear!!!

It would be interesting to see how many shirts they sell as stand alone units. Because most of the shirts delivered are probably with the mag subscriptions, it would probably be pretty difficult to extrapolate demand for T-clothing in general. That said, for most of these items its possible to get the cost pretty low even on a relatively small run.

In the meantime, try the shirts and ties with the chemical structure of test on them.

Wasn’t there an issue a long time ago, where they asked the readers for feedback on whether or not they should make a bumpersticker?

I got a Renegade Training Bumper sticker w/ the R symbol and “Live the Code” Quote on the back of my bumper.

A T-nation Bumper sticker would be cool also.

We’re not gonna put Nick in charge of the spellcheck are we?

“Who are the Chefs?”

Im all for it!

Although, im still trying to get a free one. lol haha, who knows… 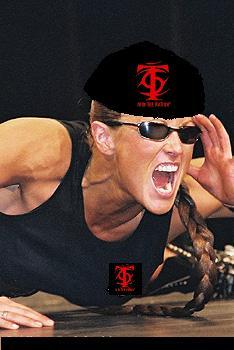 Here is the first test batch of gear.

Cake and I hit the gym today and he was nice enough to take a picture of me while finishing my 25 one arm push ups and cursing at him.
But I think we looked styling in our out fits. What do you think?

E~, it was fun but next time I won’t mind if you out rep me again but the shouting of “Get on my back you big Girly Man” has to stop.

I mean people were staring!

“Whatever I engage in, I must push inordinately”