First-post newbie here. As most of us here are, I’m thankful to have found this community as engaged and helpful as it is. A big thanks to those that created this environment and work to keep it that way.

I’ve read through many of the topics, and most of the stickies. I hope I’m going about this the right way. Smack my hand if not. I’ll try and keep this concise and not bore you to death while tracking my progress.

So yeah, 49 yo male here. A few years ago I -thought- about Test and if lowering levels were causing some minor symptoms I was experiencing. Some loss of energy, motivation, sex drive, yadda-yadda. Nothing life-changing though.

After finally getting tested earlier this year by a dialed-in men’s health doc in Irvine, CA this past Feb, we confirmed T levels were on the low side (482 / 249-836 ng/dL). His first recommendation … pellets. Sure. Why not?

They slipped in 8 - 200mg (I think they are in mg - anyone?). Well, it was an amazing effect. A few days later I was jamming through all kinds of work - physical and mental. Life was great, and I was convinced this was the answer.

Then, a few weeks later, the wound on my ass, instead of healing started to look worse. Basically, it abscessed and isolated the pellets from the bloodstream. I started to reject pellets and return to ‘normal’ levels.

I call the Dr office, and their protocol was .25ml twice weekly. Then, labs at 6 wks. After a week or so of that, and reading online about typical doses, I searched online and found a clinic in GA that sounded more in tune with appropriate men’s protocols.

That brings me to today. My current protocol prescribed by my current clinic, and started on 8/2/18 is:

As of today, I’ve been on this protocol for two weeks. I’ve got a ways to go before I start dialing in things. But I plan to test at 3 weeks and 6 weeks as I feel that I put on some water weight. About 6lbs or so. Since I generally run a very lean 165lbs, it’s rather noticeable. I have a pretty tight (Paleo) diet and easily notice any extra weight gain. Water or otherwise.

I know water retention is an issue for some, and there seem to be a few possible causes. So this will be my focus as I move forward in the coming weeks/months, hoping to get it under control. Other than not having shredded abs anymore, the only other symptom is that I’ll get slightly swollen feet in the evening time. I do work on the computer at stand up desk most of the day.

Also, I’ve had hypertension since around 2009 after kidney surgery. It is controlled with 10mg Lisinopril daily.

My E2 was pretty low prior to any TRT. Maybe, it shot up after starting TCyp. Maybe it’s something else. Or a combination of things. That’s why I want to go ahead and get labs about 3 weeks in. Or, is that a waste of time/money? Should I wait until 6 weeks?

My original (and only) labs from original clinic: 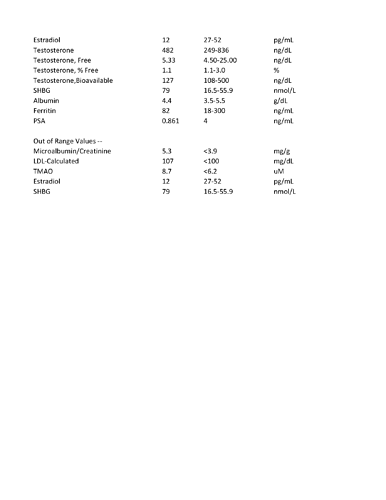 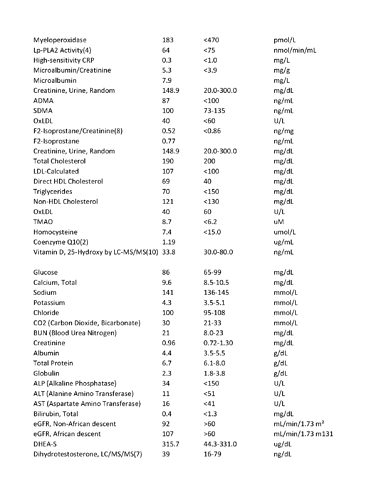 Or, is that a waste of time/money? Should I wait until 6 weeks?

I’d wait six weeks just so you can determine how you are responding regarding your symptoms.

With E2 so low, I would have waited to see how it responds to the test prior to starting anastrozole. Also, your SHBG is very high. I’d split the weekly dose of test to 80mg twice a week. Water under the bridge now, I’d stick with it until labs are obtained and adjust from there.

Yeah. I know, I should hold steady and let the cycle run it’s course. I’m trying to not get impatient, over-analyze, and make changes that only complicate the matter.

I’ve been hoping to understand the prescribed protocol as it relates to my obvious out-of-range numbers of E2 and SHBG. There is so much info out there, but not much really nails it down for me. I have faith in current Doc as the clinic specializes in HRT for men. I have to assume they’ve seen numbers like this before. Just gotta wait it out a little longer.

The Anastrozolone at .25mg seems on the lower side from what I’ve seen other’s using. Maybe the Doc isn’t working hard to keep E2 too low since I have an already low disposition. I do think about the argument that I have those numbers with low-normal TT levels, so what happens when TT is increased? I may be seeing the results with water retention now?

I have a VERY low carb diet for the past 8 or so years. I’m working to add dietary and supplemental elements to my routine that might help lower SHBG ‘naturally.’ Mainly, minerals such as Boron, Zinc and Magnesium.

As you say, let the numbers tell the story. Then, adjust protocol as necessary.

Thanks again for the feedback.

Don’t take the anastrazole. Especially being high SHBG, its bad news. Do you even need it? (the answer is: you don’t know yet) need to see if you even have an issue with converting to e2 before you start taking Trashtrazole

I wondered if I needed it as my E2 came in so low. But again, I’m assuming the Doc had seen this scenario before and prescribed (low dose) accordingly.

I’m at a bit of a loss as to what action to take - if any - at this point. I’m going into my 3rd week of the new protocol:

This is coming off of two weeks of .25ml TCyp 2 x Wk from previous Doc… Nothing else in the protocol.

I’ve been introducing TCyp for about 4+ weeks now. And, I’m a little surprised I’m not really feeling much if any effects. I don’t necessarily feel bad, but I don’t feel great either. Certainly not the burst of endless energy I had on pellets. I know it takes time, but after the (amazing) results I had on pellets, it just seems a little odd - my expectations must be skewed now.

More realistically though, I know I haven’t dialed in the dosages and had enough time for the body to adapt. I’ve read so many different protocols everyone is using. So many different factors, I know each person requires a specific set up and finding that is the real solution. If my Doc isn’t the right person, I have no qualms about replacing him. It’s just… with whom?!?

I’m new to this also but I think a lot of it is the fact you were already low E2 and you are taking an AI. I didn’t see anything written about you taking any AI with the pellets and probably raised your E2 to a better level causing you to feel better than currently. But that is just a guess. I would wait to see what new labs say and what doc is going to do to address before looking for a new one. Just my 2 cents.

I would stick with your protocol until you see what your next blood labs look like. Give your body time to adjust.

My initial protocol sent my E2 too high. Once I fixed that, I lost 10 lbs of water weight in a week. If you are seeing unexpected weight gain, it will likely fix itself as you get your protocol dialed in. Don’t worry about it, just give it time and see what your labs say.

That is an interesting idea that I hadn’t thought about. I was not on AI or anything else while pellets were working. Maybe I need a little more E2 in combo w TT? Hm.

At this point, I’m about halfway to my next labs. It makes sense to hold steady and see what the numbers say. Then, adjust from there.

I’ve been reading about the high SHBG issue, and it may be linked to my Linisinopril (10mg) daily dosage. My labs are pre-TRT, and I’d been on Linisopril (5mg) for years before starting TRT. My Doc upped the dosage to 10mg at the same visit where they drew blood for labs. So since starting TRT, my Lisinopril dosage has been 10mg.

I’m contacting my PCP this week to discuss maybe changing over to Losartan. Its an ARB (opposed to ACE inhibitor) and uses different mechanisms to lower BP. Some TRT discussions seem to favor it as it doesn’t have same effect on SHBG as ACE inhibitors do. I might be a candidate. Will see what PCP says.

Thank again for the helpful input.