My name is Arash Rahbar, my good friends Bradley Grunner and Stu Yellin have mentioned T-Nation to me many times over and I have come on and read threads here and there so I thought I’d join and introduce myself!

I’ve been Bodybuilding for 22 years (since I was 13) and have a sickening Passion (lol) for the sport and everything that goes into it…
After many many years of wanting to compete but never being truly satisfied enough with my physique to step on stage, I competed in the NPC Mens Physique division in 2014.

Why MP? Its where my body fit in at the time… I always considered myself a bodybuilder at heart but didn’t have the size, density or overall muscle mass to be competitive in BB in the NPC/IFBB…
So, I forced on a pair of board shorts and hoped onto the Atlantic States stage where I was lucky enough to win overall. I followed that up with a 12th place finish 2 weeks later at Team Universe and then placed overall at the Pittsburgh Championships where I turned pro.
I did 3 pro shows (Pittsburgh Pro 10th, NY Pro 5th, Puerto Rico Pro 2nd) not qualifying for the Olympia…

THEN, Classic Physique was announced! After doing a back flip and feeling blessed I went on to placing 1st at the Pittsburgh Pro & Ny pro (2016) and Qualifying for the 2016 Olympia!

Didn’t mean to write too much about myself, just wanted to do an intro before I post or comment!
Pleasure to be here guys! 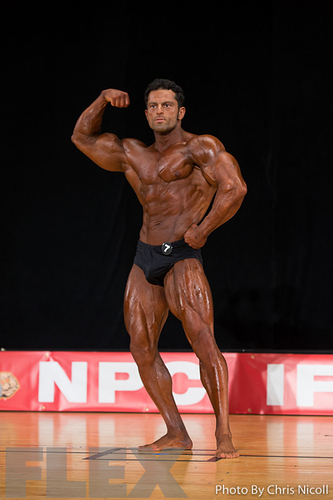 how’s your contest diet look, mate? Nice to have you here!

Yeah, this Arash-guy is okay. I’ve heard that he might have some idea what he’s doing in the gym…

Thank you, nice to be here!

It’s going good… That being said I dont have to much freedom to try and “grow”… Since I need to make the weight of 205lbs (at over 5’10") I can’t get too much bigger…
Its a weird feeling as my belief/religion (lol) the past 2 decades has been “Gain Muscle”…
So I am up 20 lbs and staying pretty tight, and fairly lean (I think) but I think I may have to come down a tad before I even begin my prep…
I’d like to improve and be rounder, but if weight is high and I need to force it down it will be harder to be round.
(I made weight for both shows no problem)

Thank you!! Working hard to improve now!
We will see how it all unfolds

Welcome aboard Mr Rahbar, and wish you best of luck for your Olympia journey.

Please elaborate some more on your dietary plan like total calories, macros, cheat meals etc, if you don’t mind.

Thank you Jasper,
Well, right now it’s like walking on egg shells… Too much of anything and I put on weight… Ive been eating very similar to my contest prep with some added carbs and freedom. I’m never a high fat guy as I put on too much weight. I don’t count macros just have a starting point and add or subtract from there depending on progress, scale and how I look. My best and most favorite guide or calculator is my eye. Even now (not in full prep mode) I wake up take a look and adjust accordingly if needed.
That being said, protein is usually around 1.5 gram per lbs of lean body mass, carbs vary and timing is key but right now maybe 200 grams. My fats are what I get from all the protein and carbs, with some fish oils and mct. But lately I’m getting some extra as I have some freedom in my diet…
I’m a big believer in carb timing and utilizing or avoiding certain hormonal response in the body. I don’t believe in ITFYM for elite BBing, for the rest of the population it meta be fine and Sid in weigh loss (although it makes for bad habits in eating)

Of course Arash speaks for himself, but we made this video for our channels when we were just hanging one night. Please forgive me for the ridiculous zooming in and out I was doing.

I don’t know what I was thinking. I gotta perfect my technology skills for the channel. I thought I was being so crafty. Plus I was damn stuffed up that day from all the pollen in the air, so excuse the mouth breathing.

A little clip of us hanging in the gym.

Congratulations on all of your accomplishments!! Thank you for sharing things about yourself in a very humble way. I look forward to seeing more post from you

Rahbar, great to have another pro here!

Stu and Grunner have been blessings to have around and I am definitely looking forward to hearing your input on all the various aspects of bodybuilding training!

I’m not particularly familiar with Classic Physique here, but you mentioned maybe having to come down in weight before starting prep–what size range are the judges rewarding right now? You said you were eating around 200 carbs per day now…is that normal for offseason or do you increase them significantly?

I’m a big believer in carb timing as well, and I rather dislike the IIFYM style dieting because of the bad habits that it allows to grow in the general public. I think it was originally supposed to be a way to “flexibly diet” but has gotten way too out of whack. Ironically the people who would build the least bad habits on it (competitors) are also the ones it doesn’t work the greatest for, being that it is kind of self limiting and you need better quality fuel to be elite.

Hey, Arash! Great to have you here! You look terrific! Congrats on your successes!

I couldn’t agree more regarding IIFYM, its basically a fancy way of saying weight watchers…
Im not in “Off season”, the time between NY Pro and Olympia prep was short.
I am eating 240 grams currently, that being said, I dont go by numbers. Its all relative to how I look and having to make a weight cut…

As far as what judges are rewarding, its not “Size range”. CP is Bodybuilding, they judge the same way. But there is a weight limit per height so the athletes can not be as big as mens open and also less likely to be disproportionate, sloppy or have guts… (hopefully lol)

Thank you very much!!!

My pleasure and thank you for the kind words!

As far as what judges are rewarding, its not “Size range”. CP is Bodybuilding, they judge the same way. But there is a weight limit per height so the athletes can not be as big as mens open and also less likely to be disproportionate, sloppy or have guts… (hopefully lol)

Thanks for the response I appreciate it! I apologize for being unclear! I know CP is bodybuilding, but as with all things the judges tend to informally look at different areas (for instance, “modern” BB division is keen on the feak factor). I was more or less just wondering how they differentiate it “in practice” I guess you could say, being that it is still a really new division compared to the others. The weight limit for height makes complete sense now, thanks.

In my (humble) opinion, I believe they want the roundest and fullest possible for the weight limit, while being symmetrical, proportionate, and conditioned… Pretty much the same as mens open but the body weight is not unlimited…