52yrs
Feeling completely crap.
Tried TRT numerous times, never works and libido, then everything else crashes after a few weeks.

I also have a varicole that is causing some discomfort, lose underwear is not possible and when I ride a motorcycle, my usual transport, bumps and potholes are felt and painful.
I had a thyroid panel done as the symptoms pointed in that direction, looks pretty normal though.
LH and FSH are very high, suggestions?

I really don’t have faith in endos and am done with throwing money at them to be told everything is ‘normal’ and that things will ‘work themselves out.’
Also I live in Asia now where I consider medicine to be well below western standards, so I am turning to the collective minds on the forum to try to find a solution.
I’ve attached labs I received today.

Thank’s to all in advance. 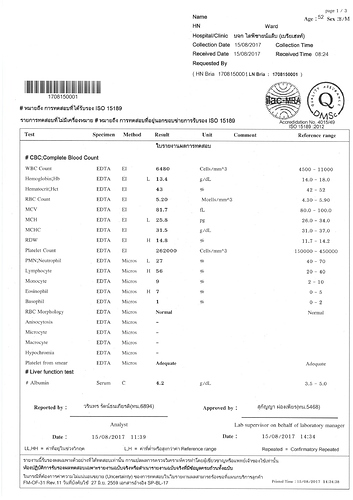 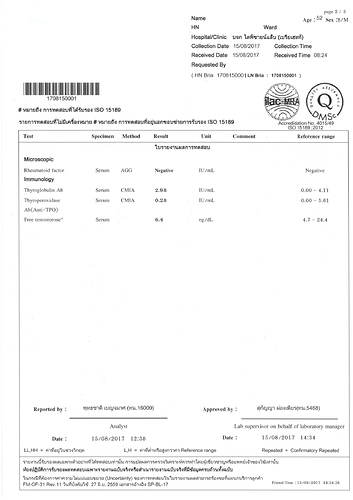 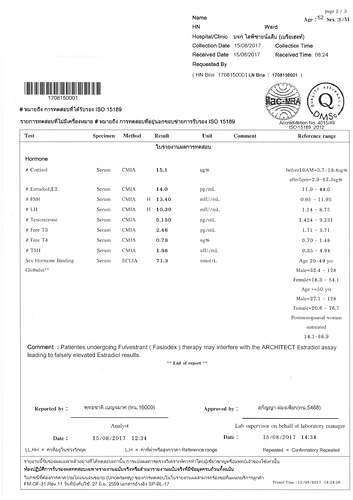 It sounds like you’re not giving TRT a chance, a lot of guys expect immediate results. I read posts everyday where guys feel great for a couple of weeks and then they start feeling horrible, that’s a normal response for most and so they think TRT doesn’t work for them. They don’t realise once you start TRT your axis shuts down after a while, weeks/months later you’ll start feeling normal again if you’re being properly managed by your doctor.

Trt has had more chances that a trailer park wife!
I tried it, and stuck it out while feeling shit, for 9 months at the longest stint, I feel that should be long enough to get ‘dialed in’.
Eating well, training hard, running reasonable doses and HCG.
Never could get that elusive sweet spot.

It gets better, I just went to a local hospital and asked to see an endo, showed her the test results.
Conversation went a bit like this…
I’m concerned by the high levels of LH and FSH in this test.
-why did you have that test?
Because those are important hormones for men.
-OH no, don’t worry about those, they are female hormones.
What!
-Those are female hormones, you should not worry about those.
Are you an endocoligst?
-Yes
I don’t believe you, do you specialize in endocology?
-I’m a doctor, I’ve studied endocology.
Sorry but if you don’t know the role those hormones play for men I can’t consult with you, I’m leaving…

Couldn’t make this up!

Faced with that I went to another hospital, this time I got the see the endo.
Checked before I got into it.
‘you’re the endocrinologist at this hospital?’
-yes.
Showed him the labs and described my symptoms.
-These ranges are normal.
‘You think my LH and FSH are normal?’
-Yes.
‘I’m an active 52yr old, not 85.’
-No no this is a normal blood test.
F
F
S

How do these people get that qualification!

OK I’ll take this in a different direction.
Can anyone recommend a good endo?
I’ll just contact them and have an online/email consult.

When you tried TRT, did you get your Estradiol checked when you felt like shit? E2 goes up for a lot of men and negates the positive TRT effects. Also if you remember, how much and what was your frequency? Injections I hope?

Also your temps and low-ish free T3 indicates a thyroid problem, do you get enough iodine?

That’s the bizarre thing, e was at a good ratio to t.
Labs looked good and nothing seemed out of wack, except how I felt and libido.
E ranged from 14-20, not what I’d call high, if it went lower than 14 I would feel like death.
That hovered around 550-650.

I did have a couple of of estrogen disasters, I’m incredibly sensitive to AI’s and the doses people use here would literally flatline my e, that’s as bad as low t, worse actually.

However I was generally able to get my e up again pretty quickly.

Even with t and e looking balanced, I just felt poor after those first few weeks, low to non existent libido and brain fog would be back…

Dosage was 50mg every Monday and Thursday. Ai was a tiny amount, anything more crashed my e. 250iu hcg same day as the test jabs, that was my protocol.