I workout often, eat clean and am overall very health conscious. Have not noticed too many side effect from the E dump.

My question is, how much Ana should I be taking moving forward to get me back in the 20s? Also, any other feedback from my current labs? Thank you all! 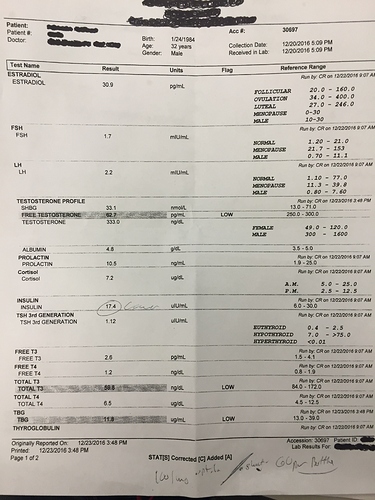 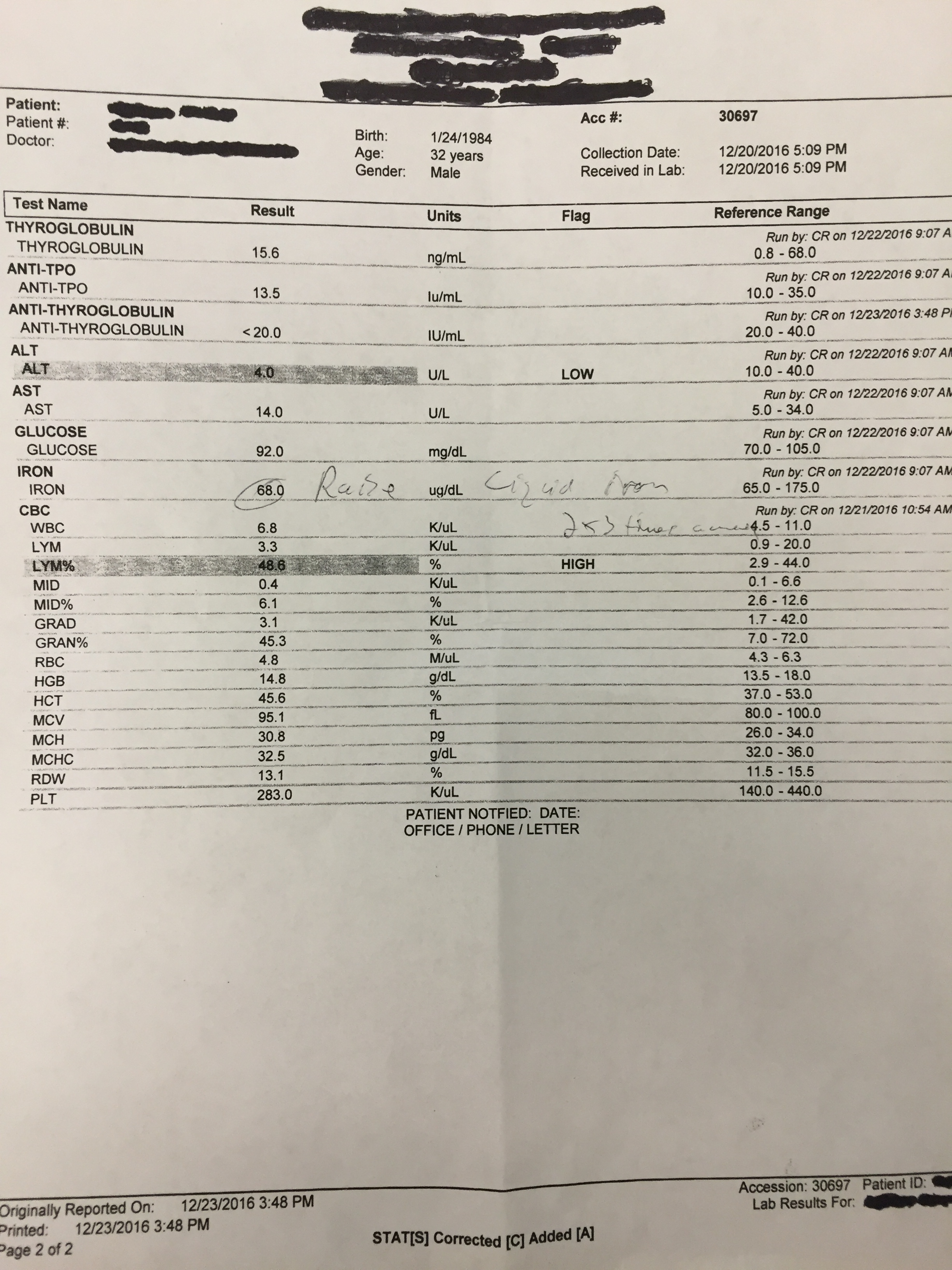 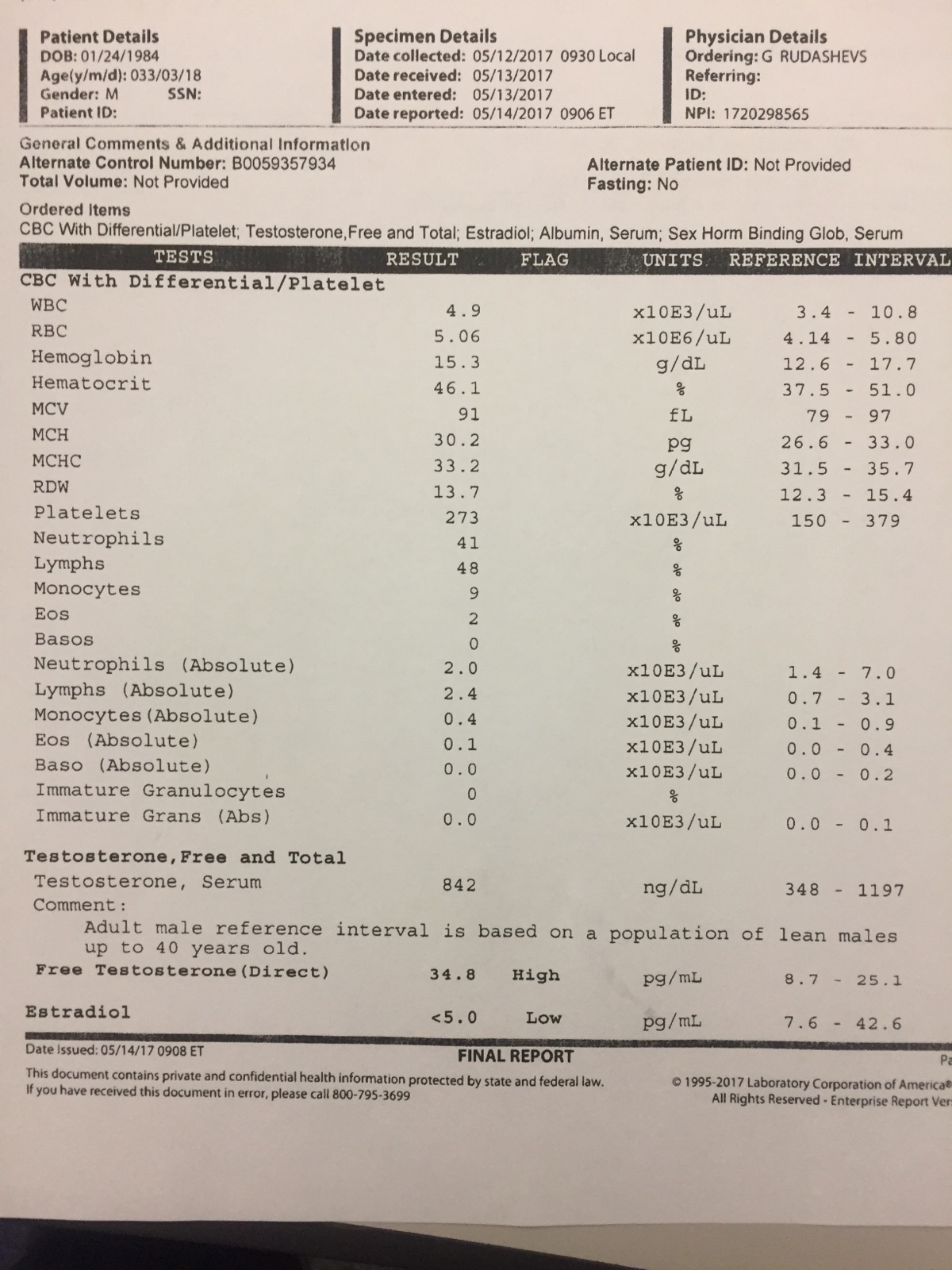 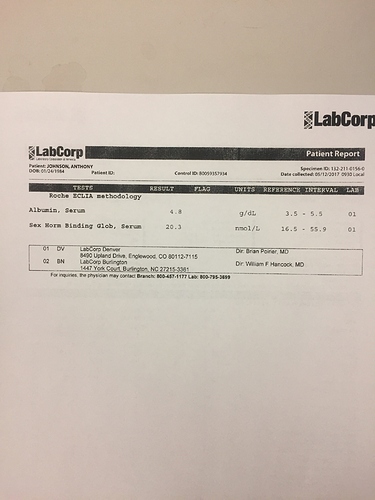 Your doc may not be familiar with any of this.

Serum iron can be all over the map depending on recent meals. Better to be guided by RBC, hemoglobin, hematocrit [HTC] and ferritin [not tested]. Men hoard iron and typically do not need supplemental iron and should avoid iron fortified cereals, flour, rice, breads and vitamins that list iron [men’s formulas do not have iron].

TRT has improved some some of the above and may continue. When a male has thin blood and one truly sees a iron deficiency, one should screen for a GI bleed as the source of the problem. An occult blood test can detect this bleeding by testing your poop. This blood cannot be seen, and occult means hidden. An occult blood test can detect bleeding that would not be from something that would be detected during a bowel exam.

What is “8wk split Wed/Sat”. IF your T is 200mg/week, that is 160mg T per week and we expect that normal anastrozole responders would then need around 1.6mg anastrozole per week. You have been taking 7x 0.25 = 1.75 mg/week which is close to 1.6mg/week. So we can strongly suspect that you are an anastrozole over responder who then needs 1/4th the expected dose or 0.6mg/week. You can’t get there in 0.25mg increments.

Dissolve anastrozole in vodka 1mg/ml and dispense by the drop or by volume. You need 0.2mg at time of T injections. Stop anastrozole for 6 days then resume at new dose and expect to feel changes in 10 days. Because of what you are doing, changes will take this longer amount of time. Over a month or so, brain patterns will change, some things take time. Libido and sexual performance is a brain function.

SHBG will increase and FT:TT FT:E2 ratios will change as well.

Questions on the .6mg/wk anast. .2 at injection, so if I do injections 2x a week, that’s only .4. When should I do the remainder?

Also, do I just use a dropper in the mouth or actually inject the vodka/anas mix along with the T?

LASTLY, if I Disolve the anas in vodka, what do you recommend I do this in (container) to make certain it is sterile?

Anastrozole has almost zero solubility in water, so we need vodka.
In vodka, very well preserved, you can make larger amounts.

Dissolve in a dropper bottle. If dropper is graduated, all the better.

Count drops of mixture per ml with the dropper and then do the math. If 30 drops per ml, .2mg is 30x.2 or 30/5= 6 drops. Some use an insulin syringe with needle removed, heat it up and pull. There are research chemical versions of anastrozole, google, but same measurement issues then, so try using what you have.