Even though I’ve been on and off TRT for a couple years I’m very much a newb. Have no idea how to read these numbers and what my levels should be based on symptoms. It seems each doc has a slightly different approach.

TRT has been love/hate for me. Started off taking .3ML weekly at 200 mg/ml and felt like I was 18 for about 4 months. Energy in the gym, high libido, reduced body fat, high confidence and life was great.
Then it all wore off, no libido and no energy. Doc upped me to .4ML for about 6 months and T levels stayed just below normal. Went off TRT cold Turkey for a little over a year. Once I started up again I felt just as amazing as the first time around. Then everything went south again. Switched doctors, who upped my dosage to .5ML weekly. Having more joint pain now, very stiff after the gym, waking up nightly at 3am, low libido, low energy, weight gain and testes have shrunk to almost nothing and bloated.

Just started .4ML 2X a week and still don’t feel any different. Doc also gave me .5 anastrazol for slightly increased estrogen. Any ideas on what could be going on and how to get back feeling great on this stuff? Labs for reference 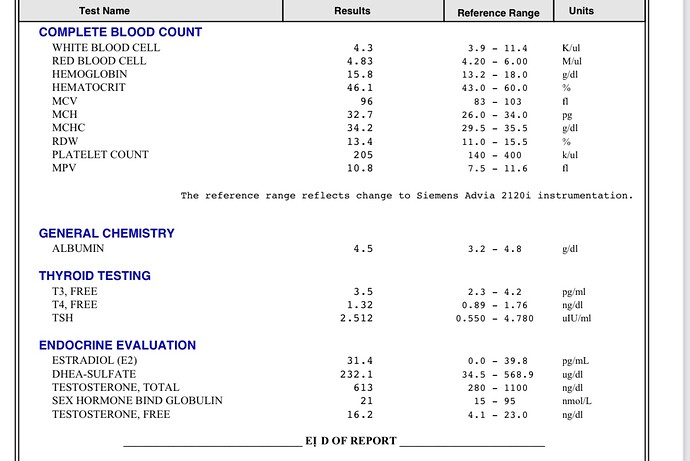 The honeymoon period does NOT last. The new T levels in your body cause a temporary increase in endorphins. As your body adjusts to the new you this will fade. If you were truly low T to start you should be left with increased energy, libido, reduced mental fog and better body composition. The ‘feel good’ mood though is just temporary.

What about the joint pain, lethargy etc. Is this from other hormones maybe being off, estrogen etc? Is my SHBG good range? Free T etc

Is this from other hormones maybe being off

The labs you posted look good. TT/FT/E2 all good. SHBG… normal to a little low but nothing to worry about. You could boost your T maybe a little from what your protocol was there. Nothing in those labs is indicative of causing joint pain. AIs can cause joint paint from crashing E2.

Yes, they bumped me up on T based on those labs. Pinned on Sunday, labs were Thursday.

your free T is low. i personally don’t feel well until i hit 30 or so.
your shbg is a bit low, you need to inject 3-4x week

Mines 16 on scale with 23 being top. Where should it be? Have been told to get it up but not how?

25-35 is a good spot for many guys. you need to find the right dose and inject 3x week to start with.
thats at least what my renowned trt clinic told me

Where should it be?

You have to find this for yourself. You’re doing well where you’re at regarding fT on a numbers basis, but the goal here is to feel better - as such, you should be going based on feel (to a degree). Free Test is what you ‘feel’ in your TRT. Total T is a mostly useless number, but your doc will likely disagree with that statement… he can fight me.

With your SHBG, you can probably pin 2x per week and be fine. In the unlikely event that you feel hormonal changes with this dosing frequency, 3x per week could also be fine. I doubt you’d need to increase frequency that badly, but if you have a hard time getting dialed in (which is the phase you are in right now) - up to daily injections can be a good place to go. Keep in mind Test C/E has an elimination half-life of 2 weeks; your body just clears it a little bit faster than others, hence the 2x/wk recommendation.

You are basing this off your labs ranges, not his. The two are not the same and should not be compared. Different labs have different ranges (which is nonsense) and often different units of measurement. You’re telling him he should be at least over the top end of his reference range while under the care of a Non-TRT Clinic…

i am not going of any lab ranges, my TRT clinic, which is used by many even here, recommend to keep your free T between 25-35. it is irrelevant if he is self-medicating, this rule is universal and a good starting point. 25-35 is not a valid range on any of the commercial lab tests in the USA and would be considered high. but i think you should know by now that lab ranges are irrelevant when it comes to TRT.

it is irrelevant if he is self-medicating

He isn’t self medicating, and it is NOT irrelevant - rather misunderstood and in need of harmonizing.

this rule is universal and a good starting point. 25-35

Dude… stop typing. He already spelled it out for you why you are wrong but you’re still not getting it. Your lab ranges and his are different 25-35 means nothing without units for starters and then it has to match the specific lab analysis. In a sense you are giving false information. At best you are telling him he needs to be in a range that works for you. One size does not fit all.

@RossVegas your FT is fine. You could potentially bump it slightly higher but not much.

what ranges you think i am refering to. 25-25% percent maybe? use your brain. obviously fucking ng/dl why would you assume I refer to nmol/L when his reference is in ng/dl.
and yes 16 is low. 16ng/dl for those on the lower IQ spectrum

for those on the lower IQ spectrum

New guy, hardly ever posts, no training log, and lacking physique, comes in and gets all personal with a veteran member over literally just being wrong.

Grow the fuck up.

use your brain. obviously fucking ng/dl why would you assume I refer to nmol/L

@Andrewgen_Receptors Nothing worse than an idiot with conviction. I mean I can put up with ignorance and even idiocracy but when one thinks this highly of themselves too its real dangerous.

it doesn’t take a lot of brain to have a training log or post a lot of posts. just because you have 25posts/day doesn’t prove anything. you could be easily replaced by chatGPT (albeit a dumbed down version)

it doesn’t take a lot of brain to have a training log or post a lot of posts.

I’m saying you have no credibility on this board, and your advice is mirroring such as well.

Exactly what I was trying to say. And yes I go to a TRT clinic. They just contracted with a new lab company so ranges are now showing differently than my old labs. Free T only goes to 23 under their new system. Even the doctor was a little confused at first glance when looking at it. Basically what you’re saying is splitting up my dose more frequently will allow my Free T and SHBG to increase?

you’re saying is splitting up my dose more frequently will allow my Free T and SHBG to increase?

Not quite. While SHBG can lower with TRT or an oral steroid for the most part you have to work with what your levels are. Yours certainly doesn’t need to be lower, its already on the low end which isn’t bad you just ‘may’ need to pin more often than say a high SHBG guy. Point being, with your SHBG you would likely feel best pinning at least 2x a week over less frequent injections.

For me, this would be too much. I would use that amount with 500 mg of Test per week.

Are these capsules or tabs? If tabs, I’d quarter them and start with two a week. If capsules, I’d ask for a lower dose to start.

i am not going of any lab ranges, my TRT clinic, which is used by many even here, recommend to keep your free T between 25-35. it is irrelevant if he is self-medicating, this rule is universal and a good starting point.

I’d encourage you to do a deep dive on the different lab ranges for TT and FT.

We have different equipment or calibration standards between labs. Just because the unit is in ng/dL doesn’t mean the same number means the same thing coming from two different labs.

Not trying to be condescending, but do you understand the difference between accuracy and precision?

Your clinic says that as a rule because they likely always use the same lab company. It is true in that case.