Had it today. Man, what a great experience. I competed in the WABDL in Aberdeen and boy do they put on a great meet. I got to meet some awesome lifters and see some amazing lifts. If this Fed had the squat I would most certainly make it my home. It’s so hard for me to find a meet because I am out to sea 5-6 months out of the year, but this one fit right into my schedule.

I competed in Class 1 men’s 242. I was RAW for this meet. I developed a lot of respect for the technique that goes into geared lifting. I opened at 336 on bench and smoked it. Second attempt was 348 and smoked it. Failed the last attempt (lost tightness on the pause) at 363 but felt I could have done it.
I opened at 611.7 on deadlift and smoked it.

I did my second attempt at 639.2 and smoked it for a state record. My third was 661.2 and smoked it but got reds for a slight hitch (my only gripe of the day). I was a little dissappointed with my deadlift (my plan was to attempt a 3 X bodyweight raw for a fourth attempt that I passed on). I really wanted 718 on the bar but lost total focus after the hitch call.

Overall, the judging was strict, but fair, with maybe a couple of questionably long pauses on the chest (My 165 partner’s 3rd attempt must have sat on his chest for 3 full seconds).
I can’t wait to compete again and get a squat in. I am very happy to have my cherry popped on powerlifting competition. I feel like I am not a blowhard when I talk about being a powerlifter now.

Very strong for a first meet, you’ve got a great future ahead of you in the sport. Best of luck with your training and keep us updated.

O yeah!! i love to see a fellow T-member to compete!! nothing like seeing someone testing their true stregth and not posting in a photo based thread…keep us updated on a lod just so you can follow us up into another competition

Wow… that’s a great showing for your first meet. Upwards and onwards now!!

Wow awesome numbers, especially since it was your first meet.

Thanks for the compliments. The most impressive lift I saw all day was an 81 year old man deadlift 360 lbs. When he was done deadlifting he went to the back and was asking other lifters (the ones who were doing big numbers) how they train and he was actually taking notes in a little notebook. I hope to be wiping my own ass at 81 let alone seeking out training advice so I can get stronger.

Wow! Great job. Your training will never be the same. 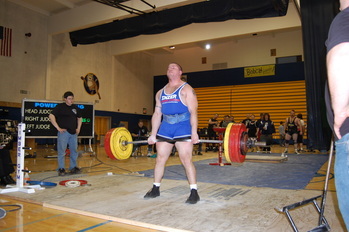 This is Gianacakos’ training partner.I competed in the Men’s Class 1 @ 165. My numbers, especially bench, weren’t quite as impressive, but I also had a great time and set a 30lb PR in the dead.

We had a great time though. A lot of good lifters down there. Brent Mikesell was there selling gear and T-shirts and his daughter, who was like 14 or something deadlifted. There were also several blind competitors. Very inspirational stuff. Much props to everyone that competed. Don Bell put on a good meat and we got some pretty sweet trophies.

Can’t wait 'till the next time I can compete, hopefully with a little more poundage. Here are a few pics. 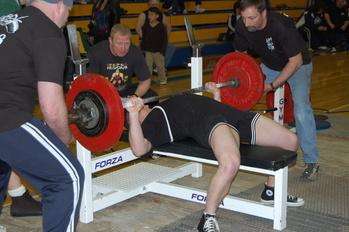 Here. The first pic was the state record. I’m having trouble figuring out the pic posting. 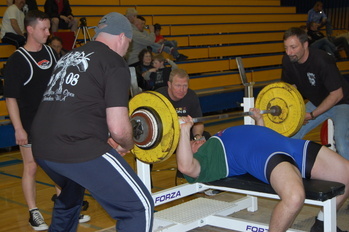 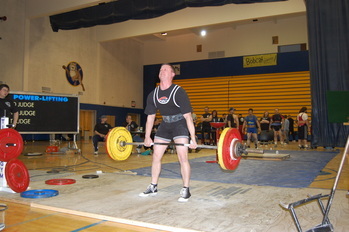 Now keep it up.

Hit competitions whenever it fits in your schedule, man.

That’s all three of my bench and dead attempts and 2 of my partner’s bench attempts and all three of his deads. My final 661(8:10 is where it gets going) is at the very end (see how you feel about my hitching). The video isn’t great, but I appreciate my wife being able to take the video and control my two unruly children.

As a judge myself I would have to agree with the judges on that one. There was a visible “hitch” or “up and down movement”, although that did not look like anything that helped your lift in any signifigant means.

I may be alone on this but I don’t mind strict judging, I don’t like receiving gifts and want there to be no question that my lift could pass in any federation. Alot of organizations are trying to perserve their integrity in light of all the new lax federations appearing every year, I don’t always agree with it…but you need to learn to make your lifts “pretty” for alot of organizations these days.

Oh, I agree with you. Strict and fair is the way to go. I knew I had a little jerk in there that’s why I immediately looked to the reader-board. I just wish I could have made it prettier, because like you said I don’t feel like it helped me too much.

I always have a little jerk when I am at near max effort, any advice on how to alleviate it? I would really like to not lose out on lifts I know I can get in the future. I am like a sponge for advice from more experienced lifters and welcome any and all criticism. Thanks for an honest objective viewpoint. Other than the hitch, did everything look good?

No problem. Nope, everything else looked fine. As you can see one judge changed his light to red even before lift had finished (right after the hitch).

Its one of those mental aspects of lifting that you have to get past. You’re probably thinking “I have to get this lockout done fast or I’ll miss the lift”, had you slowed it down and grinded through that last few inches I have no doubt that you would of made the lift. The lift looked really easy, are you lacking confidence at the lockout?

I don’t think I lack confidence at the lockout, I am too inexperienced to lack confidence I would say. I just try to approach the bar and lift it as fast and easy as I can. It becomes instinctual to just try to “kill” the lift, but you are 100% accurate in your assessment. I think I might need to focus on a clean lift rather than just going crazy on it.

The lift wasn’t “hard”, I probably had 25-50 pounds of a crazy, disgusting, sloppy grinder in the tank. So would relaxing a little maybe help me not do that hitch?

I’m sure it would, the best practice you could do is make every rep in training perfec, from your one plate warm up to the 600lb work sets. Have your training partners read up on the rules and watch your lifts acting as informal judges, giving you verbal ques as you lift.

I have found in mine and my training partners experiance that telling each other straight up what we are doing wrong and what we need to fix makes a world of difference. I would not change your prelift routine, if you get physched up then continue to do so, just train everyday like its a competition and make all your reps perfect.