My Back Squatting Video 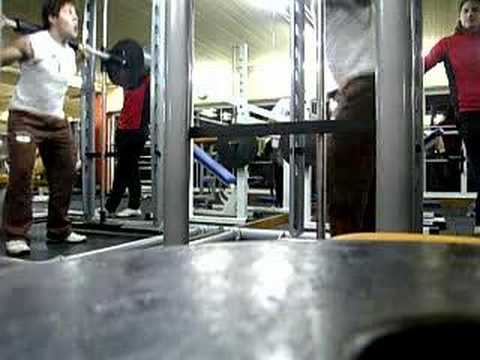 that was a pretty big pb for me…
redbull rocks!

its not a smith.
smiths restrict u in a linear motion.

Yah, I noticed the normal track of a smith machine came off when you unhooked the bar. What kind of machine is it?

its a stupid rack. The old power rackgot replaced by this one! I found it a bit uncomfortable at first, but got used to it eventually. There is not much difference at all between this and a normal rack.

I have to say that is pretty damn weird. Never seen or heard of that in my whole life. Pretty good job though on the squats, espeically at your weight.

will say though expect a bit off drop off without those supports They do kee[p you from ahing to balance side ways and the bar from having any sway or variance from side to side.

No the less good work.

[quote]acidhell wrote:
its not a smith.
smiths restrict u in a linear motion.[/quote]

But you are restricted laterally, not that you should be moving laterally in a squat anyway. I just don’t like the idea of any plane of motion being eliminated.

Definitely have never seen a rack like that. Not my thing, but if that’s all you have to work with, at least it doesn’t restrict your natural motion like a smith does.

Excellent job on the squats. Even as you started to fatigue your form was still pretty decent. You got a little wobbly on the legs towards the end, but it didn’t look like you started using your bad hardly at all.

Overall great job! I wasn’t sure what I was about to watch, but I was impressed. Keep at it!

[quote]malonetd wrote:
acidhell wrote:
its not a smith.
smiths restrict u in a linear motion.

But you are restricted laterally, not that you should be moving laterally in a squat anyway. I just don’t like the idea of any plane of motion being eliminated.[/quote]

exactly but that lateral movement does happen to a degree and it takes muscle etc to control it. Like hell a heavy walkout even.

I agree if you can get out of that damn thing. But gotta do what you gotta do.

yes damn it, i know having no side to side motion may actually help (not much though). I ve repeatedly asked the owner to buy a new proper power/squat rack and get rid of this. But given that i am the only person who squats in that gym, i don’t really know if my wish will be fulfilled

Oh …the last reps were so HARD, i wanted to throw up so bad at the end but i was glad i made such a big rep PB.
A big thanks for the support.

and here is the 1rm PB (150kg) of my training partner on the back squat.

What do you think of his form and depth? I told him he was a bit high, but he has difficulties to get to full depth with heavy loads … maybe because his levers suck… dont know

If you are going to compete, that “contraption” is going to mess up your free squat mechanics.