Music Player for Working Out

I want to purchase a music player/mp3 player for gym and riding my bike. What suggestions do you make?

For the past few years I have resisted buying any apple products, purely for the fact that everyone has a iphone/ipod. In this case should I swallow my pride and get an ipod, or are there better music players out there that would suit my demands? (remembering I will be wearing a helmet when riding the bike).

the iPod comes with a buttload of accessories to use it while doing sports. But you may want to hold off, it’s a generation behind the iPhone 4S right now. It might not even be released for the 4S generation, they might just release the iPhone 5/iPod 5 next year.

I use a Blackberry because it came with my job. I tried out an iPhone for 3-4 days but I could not type like lightning and I found it was a little too toyish. the BB has good playback and allows me to type about 60 words a minute (emailing for work is key…) so I’m good with it. I can also use it as a USB key to transfer work files. But it does lack cool apps and does get temperamental on me at time (“Leave me alone I’m processing something.”)

If I had to pick one for personal use, I’d have bought an iPhone because I wouldn’t need the email as much and it has some cooler apps (Plants vs Zombies).

I think the best thing you could possibly stick in your ears would be the business end of a .357 Magnum. The sound of that barrel blowing its payload right through your brainpan would be music to everyone’s ears.

Ipod. They are popular bc they are awesome.

Now that is pretty fucking funny

Let us know if you want us to decide what underwear you buy as well. Or ask your mother.

Thanks for all of your help friends!

I am still undecided, although it sounds like the ipod is the way to go. Im assuming I should get one of those mini ipods?

We have whittled him down to one tweet, we will grind down the one still standing.

No need for any decisive actions.

Also, there is an Ipod you can wear around your arm OP, that should work.

I don’t think there’s anything wrong with Apple products themselves (I only have a 2006 30G iPod) but it’s the people that love them so much that make it feel silly.
I think Apple products are like coffee and sushi. It’s OK to like it but just don’t fucking talk about how much you can’t live without it shit. 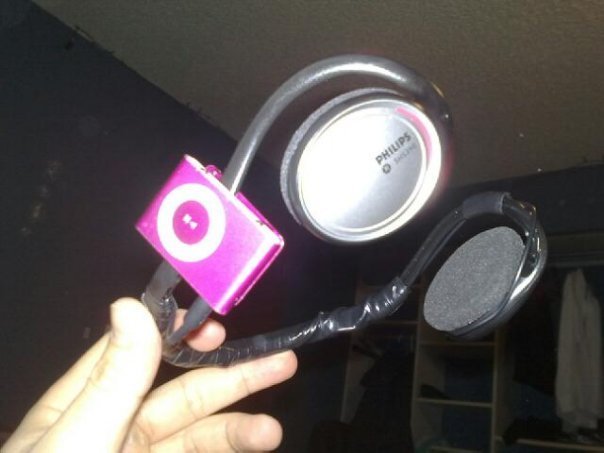 Get a Ipod Shuffle and do this:

Thats a smart idea. Although wont work well if Im on my bike. My helmet wouldnt fit over the top. But I like that setup for the gym.

OR get a Creative ( one of the Zen range), as good as an ipod, cheaper, actually has a resat button if it freezes. Also works with napster really well. if you subscribe, you can download unlimited music to it. been using this setup past 5 years, no probs
oh, and its the actual earphones themselves that will affect the comfort when youre wearing a helmet, try find some low-profile in ear ones

I dont like Ipods because of Itunes, the low volume, the high cost, and the bad interface.

I have had problems with the Creative ones. every single one i have had has just died on me after like 6 months.

Now I’m using an older version of the Sony Walkman A series, and its great. Good volume and quality sound, long battery life, easy to use with a goood touch screen and a good Interface.

Thanks friends.
I will be going to the shops on Thursday and I will report back on here with the winner!

really? i have gone through 3 in 5 years, and they get abused to hell with all kinds of shit

i like the size of the shuffle - but i also like to be able to choose particular songs for max efforts or particular albums for certain exercises.

i like the mini because it is light and relatively small and i can choose the music. most of my gym gear has pockets round the back which fit this perfectly.

i like the bigger one (whatever it is called) for its capacity but find it too heavy for the gym. it also makes grunty noises (i don’t know much about this stuff but that suggests to me it has moving hardware parts) so i’m a bit scared of jolting it or slamming it with a barbell as i have a tendancy to do…

i’ve been finding i go through headphones like nobodies business… i’ve learned not to buy ones with controls on the wires because the controls get slammed by the bar when i clean. i also find the plastic starts to kind of… disintegrate over time. from sweat, i suppose. the worst thing is that they always crap out because the wires go. one of the speakers gives out. i think it is because i pull it around by the headphones a lot and it dangles. or maybe because shoving it in pockets bends the wires a bit much down close to the pod.

i got some of the bug ones with the plastic bit that goes behind my ear and this holds them secure. got waterproof ones so will see whether that protects the plastic from sweat disintegration (since i can wash them now). still figure the wires will give out first. probably should just get cheap ear buds and suck up the fact that i need to replace them about every 3 months…

I got this iPod shuffle(in black), I just clip it to my collar. If I’m doing front squats/cleans/etc, then I’ll adjust so that no wires or the device are in harms way.

Only one twat now.

I do think that people would be nicer to The Bird if only his soccer player avatar wasn’t one where the player even looks like he’s running around saying “Tweet tweet!”