Most Bizarre Food You Ever Had?

I recall that show once,
most shriek out at what Andrew Zimmerne eats but i envy his job, it would be my dream to be the new host.

I remember taking a bite of rotten fish once in Thailand, it was mashed up after being pickled and mixed with garlic and used as a dip for stuff.

I also remember eating a roast pigeon and eating the brain.

Unfortunetly most americans would consider something like vegemite to be9 as far as they go.
like i say to friends
“(insert offal or moldy part of chese)” is the best part of (insert main dish)"
What is the most bizare food you ever had?

I knew a guy who ate a banana out of a strippers snatch in Thailand. Sounds way funkier than what you ate. 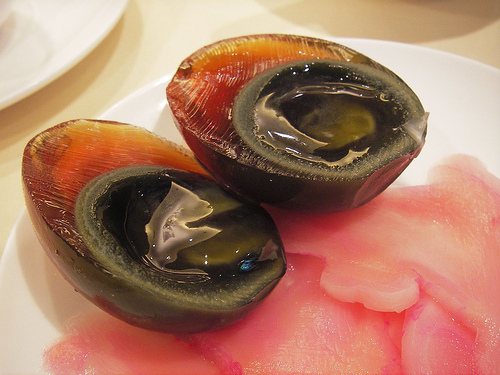 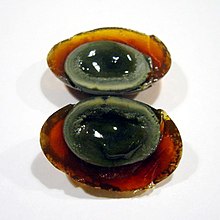 ^ I didn’t actually eat this. Just throwing it up (pun intended) because it’s one of the most disgusting things I’ve ever seen, edible or otherwise.

Eat those eggs with pickled ginger as an appetizer, they are kinda bland though.

I’ve had those eggs and yeah, they look worse than they taste.

Andrew Zimmern came here to Taipei and had chicken uterus on a stick. Even the woman from taiwan who walked around with him only ate one (they’re kind of like a shish-kebab and there are 4 or 5 uteruses on a stick)

One time I was fed some whale penis but didn’t know at the time.

Natto. That stuff is like burnt tire covered in the diaper of a diarrheic geriatric with alzheimers and an affection for prunes and psyllium

One time I was fed some whale penis but didn’t know at the time. [/quote]

Why? Were u passed-out drunk?

I’ve eaten everything mentioned on here except the penis and uterus. 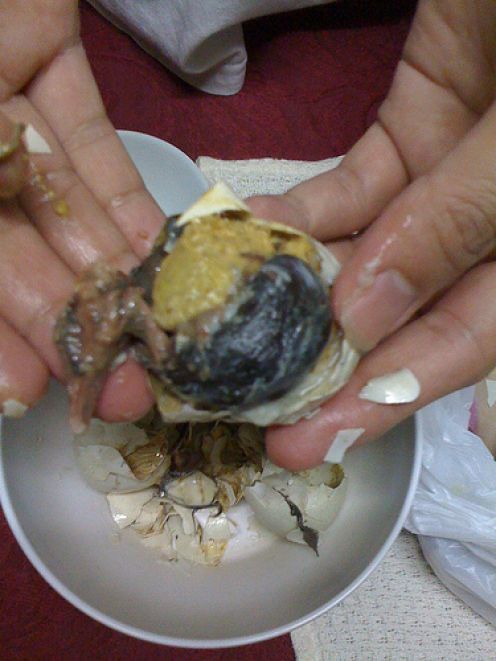 Balut I did not like at all. The idea that you are tearing through an embryo just couldn’t stop bothering me.

In Vietnam I ate a snake’s heart with a shot of its blood. Taste and consistency weren’t great but I felt like a fucking jungle king.

The grossest thing I have ever eaten is actually papaya, in Ghana. I was waiting for a bus (“There is no schedule, sir, it comes when it comes” lol) and was absolutely starving. I went to a street vendor and bought muskrat on a stick with sliced papaya. Ate it and enjoyed the fuck out of it and then, after I was done with the meal, I looked over and noticed the woman using the knife she had sliced the papaya with to cut into rotten dead fish. I mean REALLY rotten. Noticed that many of them had been cut before I got there too.

I was sick for 5 days. I actually thought I might die, it was that bad lol.

In Vietnam I ate a snake’s heart with a shot of its blood. Taste and consistency weren’t great but I felt like a fucking jungle king.
[/quote]

I had the same thing with my Vietnamese buddies family, washed it down with a large shot of Cognac, it was an experience. Besides that the only gross thing I have had is mountain oysters- bull testicles.

[quote]Nards wrote:
One time I was fed some whale penis but didn’t know at the time. [/quote]

The whale was still alive and attached to it. You knew. LOL

But seriously, is it that they didn’t tell you what it was or you ordered and didn’t realize what you had ordered? Just curious.

hhhhmmm, does that logic work with chocolate too? I’m just wondering if I dip something in chocolate ladies will be more likely to put it in their mouth.

hhhhmmm, does that logic work with chocolate too? I’m just wondering if I dip something in chocolate ladies will be more likely to put it in their mouth.[/quote]

Never had it, but they sell canned cheeseburgers.

Not really that bizarre beef tongue, cheeks and goose liver.

I’ve traveled a lot and have eaten most of what has been posted so far (can’t top the whale penis though, Nards!) I love trying new foods and going to the “non-touristy” places when I’m abroad. I think the most unpleasant food I’ve had was fried bugs (BIG bugs) on a stick in China - that was kinda gross.

The BEST “street food” I’ve ever had was in Cochabamba, Bolivia and it was called “anticucho”, if memory serves. It is thinly sliced beef heart, broiled and served on a stick with a type of hot mustard. OHMYGODSOFUCKINGGOOD! I am literally SALIVATING at the memory. Cochabamba has great food in general, but I digress.

Just came up with another one–it was in Spain (though they told me it was French-inspired), for breakfast: some sort of brain matter scrambled into eggs and fried. I can’t remember what animal it was. It wasn’t bad in theory, but the taste and consistency were atrocious–slimy, watery, gelatinous chunks of pink gooey shit sliding down your throat. I’m gonna be sick just typing this lol.

I have had brain on other occasions and it was, if not great, at least descent. I think this had more to do with the specifics of the situation.