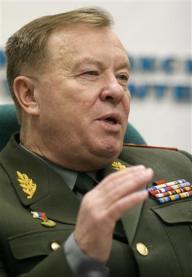 MOSCOW (Reuters) - Russia’s military is capable of firing missiles at Poland and the Czech Republic if they agreed to host a U.S. missile shield, Russia’s Strategic Forces commander said, but added it was for the Kremlin to decide.

President Vladimir Putin has described Washington’s plans to deploy elements of its Missile Defense System in the two central European states as a threat to Russia’s national security which would damage the strategic balance of forces on the continent.

“So far we have seen nothing being done, only intentions being talked about,” General Nikolai Solovtsov told a news conference on Monday.

“But should the Polish and Czech governments decide (to host the U.S. missile shield), the strategic missile forces will be capable of having these installations as their targets if a relevant political decision were made,” he added.

NATO spokesman James Appathurai, responding to the general’s comments, said in a statement: “The days of talk of targeting NATO territory or vice versa are long past us. This kind of extreme language is out of date and uncalled for.”

In early 1990s, post-Soviet Russia announced its missiles were no longer targeted at NATO countries. Analysts said then the announcement, which could not be independently verified, was a purely symbolic gesture ending the Cold War hostility.

Relations between Moscow and Washington have soured since NATO’s expansion eastward and the announcement of the U.S. missile plans.

Russia distrusts U.S. assurances the European missile shield is meant to avert possible attacks from countries such as Iran or North Korea and says it believes it is the real target.

In a speech this month which smacked of the Cold War to Western ears, Russian President Vladimir Putin accused Washington of seeking to impose its will on the world.

Putin later said his speech at a security conference in Munich was intended to flag Russia’s independent foreign policy rather than to revive confrontation with the West.

He said massive investment in the military industrial complex under Putin made possible the creation of new weapons to match the U.S. project.

“Missile producers – that is around 500 enterprises – will be capable to meet any tasks in the next few years,” he said.

Solovtsov said missile factories could produce in few years a new supersonic missile invisible to the U.S. missile shield or restart production of intermediate range missiles, if Moscow decided to quit a 1987 pact with Washington banning them.

“Russia is ready for any scenario now,” he said, reiterating several times during the news conference that the military would only follow decisions by politicians.

Solovtsov rejected suggestions that the row over the U.S. missiles in Europe could restart an expensive arms race.

“During the Cold War we competed by boosting the number of missiles, launching pads,” Solovtsov said. “I do not think we will go again along this path. We can now solve the task through quality of weapons, rather than through their quantity.” 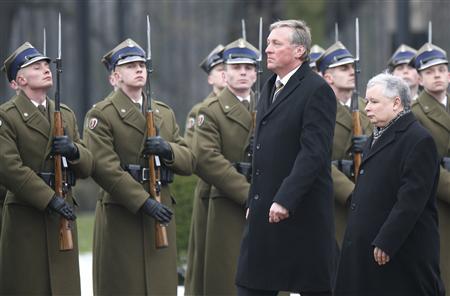 The Czech Republic said on Tuesday it would not be intimidated by Russia over plans to site parts of a U.S. missile defense system on its territory and said attempts at "blackmail" by Moscow would backfire.

Here’s what the Czechs have to say about it.

Russia is especially pissed off regarding the Ukraine about to join NATO, considering their wealth, formality as a USSR province, and the fact they still have 400 nukes from those glory days…

Considering we’re not planning on attakcing Russia, at least at this time, maybe they should devote some spending to helping their people not starve, then North Korea might follow suite.