One study says we ingest the equivalent of a credit card every week. Here are some things you can do to make yourself safer.

But more than any comic book character, with the possible exception of the Hulk and his association with the nuclear age, Plastic Man was a product of the times he was born in, as his birth was inspired by WWII and the burgeoning plastics industry.

New plastics were being invented and regularly appropriated by the war effort. The discovery of polyethylene, for instance, was used to insulate radar cabling, lightening it to such a degree that it became feasible to put them on English planes and give them a significant advantage over the Krauts.

Meanwhile, across the pond, in another example, DuPont invented nylon, which was initially released for sale as synthetic silk hosiery for dames but was then repurposed by the U.S. Military for use in parachutes and ropes.

So, it was only natural that when Patrick “Eel” O’Brian, a small-time crook, attempted a heist of the Crawford Chemical Company, he was engulfed by a vat of “unidentified chemicals” and transformed into the most malleable of crime fighters, Plastic Man.

As origin stories go, it’s standard stuff. Unfortunately, you and I are also being turned into “plastic men,” but our origin story is potentially much more tragic than that of the original.

Just How Bad Is It?

My point regarding their size is this: these plastic particles can easily get into our lungs, our blood, our organs, and even our brains… and they do, turning us into real-life versions of Plastic Man, only without the ability to watch TV in the living room and stretch an arm out to grab a beer from the fridge in the kitchen, 30 feet away.

Consider that two-thirds of the clothing we buy is made of plastic and it’s constantly being shed into the swirling air current around us. If our vision was keen enough and the sun were shining just right, we’d all look like Pigpen from Peanuts, only the cloud would consist of plastic particles instead of dirt.

Our dryers vomit plastic particles out of their vents. Your Starbuck’s coffee cup is lined with the same polyethylene used to coat radar cabling in WWII and every time you raise the cup to your mouth, you knock thousands of microparticles and millions of nanoplastics loose.

Most of the carpets you walk on are nylon, polypropylene, or polyester. Every time you walk across them, you’re kicking up plastic particles like a kid kicking his way through piles of dead leaves in the fall.

And the slightest crack, visible or not, in your Teflon pan spices up your corned beef hash with as many as 2.3 million tiny particles, and that number is based on just 30 seconds of cooking time. Similarly, the plastic cooking spoons, whisks, or spatulas you use to stir your food – assuming it’s at least 158 degrees F, dump their own nefarious seasonings into your dinner.

Regarding the latter, German scientists found that ingesting just 90 micrograms of these oligomers (the building blocks of plastic polymers) would be dangerous to someone weighing 60 kilos (about 132 pounds). That fact is meaningless until you look at their findings: Of the 33 plastic kitchen utensils they tested, 10 of them (about 30 percent) could easily exceed the 90-microgram daily limit if multiple meals were prepared using them.

Plastics have been found at the bottom of the Marianna Trench and at the top of the Pyrenees. Henderson Island, a UNESCO World Heritage Site with no human habitants, is littered with more than 37 million plastic fragments, and those are just the visible ones (not microplastics or nanoplastics).

I could go on for pages. 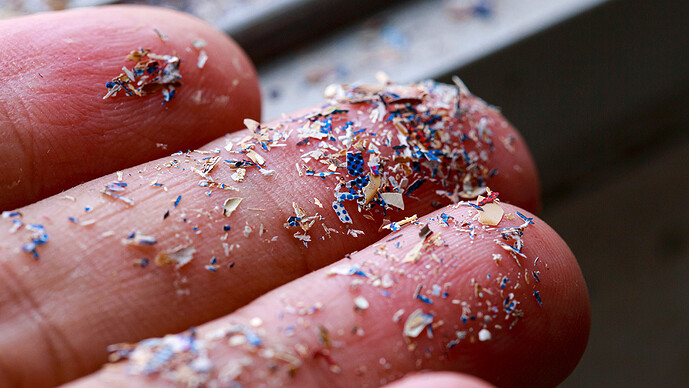 Every Breath You Take

Author Matt Simon describes the enormity of the problem in his new book, A Poison Like No Other:

“You are at this moment exposed to some of the highest concentrations of microplastic anywhere. Stare into the light pouring in through a window and you’ll catch glimmers of airborne microplastics flittering around like insects. Leave out a glass of water and you’ll find microfibers from your clothes creating tiny dents of surface tension. Leave a glass next to your bed when you change your sheets and you’ll see just how many particles the fabric flings into the air. The dust that accumulates in corners and the lint that sticks to your clothes—it’s all plastic.”

It seems most people don’t think about this topic much at all. They think they’re doing their part to combat the problem by recycling their plastic Snapple bottles. As if.

Greenpeace recently reported that the U.S. recycles less than 5% of plastics, the rest being burned, landfilled, or tossed out of car windows or off the decks of boats where environmental forces act on these plastic objects like rock tumblers until they’re atomized and float, seep, or sink into our ecosystems.

With apologies to Sting, every move you make, every bond you break, every step you take, you’ll be launching untold thousands of plastic particles into the air. Likewise, every bite of food, every sip of water, every breath, introduces more plastic into your body.

How much plastic? Researchers at the University of Newcastle in Australia estimate that people consume about 5 grams of these plastics a week, which is roughly the equivalent of a credit card.

Why, with a little bit of sphincteral dexterity, you could be your own 3D printer, popping out a miniature plastic chifforobe and other pieces of furniture for your daughter’s dollhouse.

I’m being ridiculous, of course. Everyone knows that most of the plastic isn’t excreted and stays in your body.

Just How Can Plastics Hurt Us?

There just hasn’t been that much research done on exactly how microplastics can hurt us, but Pete Myers, the founder and chief scientist of the nonprofit Environmental Health Services and adjunct professor of chemistry at Carnegie Mellon University, channeled the Greek Goddess Minerva and said it this way: “There cannot be no effect.”

That being said, there is some research to draw upon and it’s discomforting. Here are just a few of the potentially harmful effects of ingesting micro and nano plastics:

And that’s just what we know about and doesn’t include what we suspect.

Do We Have Any Recourse? 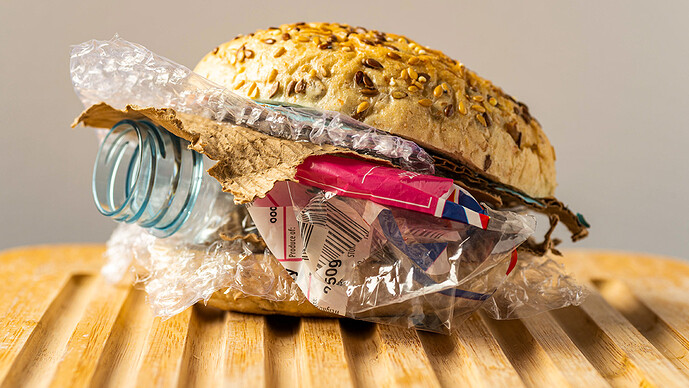 There is no easy fix, of course. Granted, you could eliminate most of the plastics in your life, but it would practically have to become your life’s work. And even then, you’d likely make plenty of mistakes. After all, fighting a virtually invisible enemy ain’t easy.

That being said, there are probably a few things you can do to slow down your conversion to a modern-day Plastic Man. Here are my recommendations, none of which require that much effort:

Do all the above and you’ll still be besieged by micro and nanoplastics, but hopefully, the reduction in exposure will give you a fighting chance of making it out of here alive.

Humanity: always our own worst enemy.

Might this be a greater threat than man caused global warming.

I think it could be a more immediate threat.

In the interest of developing products as cheaply as possible, we ignored the consequences for too long and/or are just now beginning to understand the impact of these decisions.

Also, there is some credence to the idea that the large garbage patches are hindering some normal seawater evaporation (since it’s essentially an insulating blanket for that area of the ocean) and contributing further to global warming.

Close to 15 years ago the Doc Zone on the CBC in Canada did an episode called The Disappearing Male on the topic of how plastic toxins affect fertility. Unfortunately the episode is no longer on the shows website but there are plenty of listings on youtube including the one I linked to below. It’s worth a watch if you’re interested in the science. 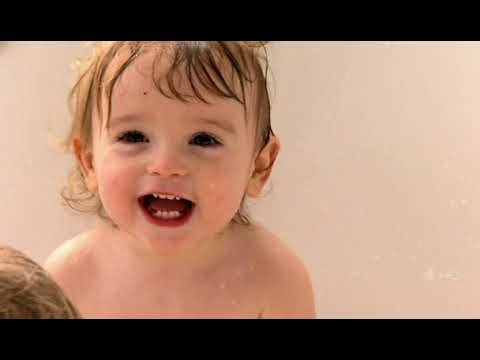 Faster, easier, and cheaper are today’s goals for most everything. We’ll sort out the damaging effects later, after I get my share.

Might this be a greater threat than man caused global warming.

Some say the world will end in fire, some say in ice…

Also, there is some credence to the idea that the large garbage patches are hindering some normal seawater evaporation (since it’s essentially an insulating blanket for that area of the ocean) and contributing further to global warming.

I worry about the phytoplankton, which are responsible for most of the oxygen production on earth. They appear to be struggling with global warming and the plastics can’t be helping either.

This is really interesting. I’m wondering how you can ever really do research on the effects of plastics, since it seems like the entire world would have all the issues you mentioned. How can you ever really have a control group?

Definitely one of the contributing factors. The thing that sucks though is that science has not found a way to reverse the effects of microplastics on the human body yet. Our best bet is general avoidance.

For what it’s worth, several years ago I read that saunas are supposedly the only way to rid the body of plastics.

TC wrote a bit about that here. Heavy sweating might be the key: 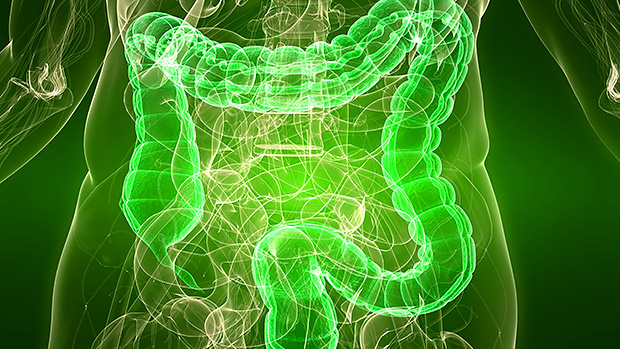 Tip: An Easy Way to Rid Your Body of Plastic

Nope, it doesn't involve any stupid detox diets or drinks. And chances are you're probably already doing a little of it.

I recommend the 10K Kettlebell Swing challenge for heavy sweating… 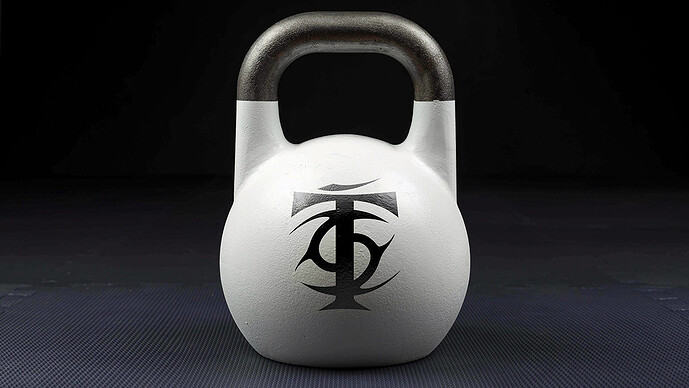 The best kettlebell workout. The most powerful kettlebell exercise plus hardcore strength work. Get ready to be better... at everything!

I’m wondering how you can ever really do research on the effects of plastics, since it seems like the entire world would have all the issues you mentioned. How can you ever really have a control group?

I know! I was thinking maybe the Surma tribe that live in Southern Ethiopia (the ones who wear plates in their lips) who avoid civilization, but even they wear necklaces and bracelets made out of plastic.

C wrote a bit about that here. Heavy sweating might be the key:

Thanks for linking that. Unfortunately, that wouldn’t work for that stuff that’s become enmeshed with internal organs.

For what it’s worth, several years ago I read that saunas are supposedly the only way to rid the body of plastics.

Hell, I’m a Finn, and I’m sure I’m still all plasticky in my internal organs.

I really appreciate the practical suggestions at the end.

Probiotics play a big part here, like so many things. Having a diverse microbiome can do wonders to process waste and inorganics from the body. Even the ocean’s and lakes microbiome processes waste in the same way. I suggest natural traditionally cultured, fermented foods over lab made pills, such as fermented veggies, kefir (the most diverse of all probiotics, esp if homemade) kombucha, kimchi, etc. 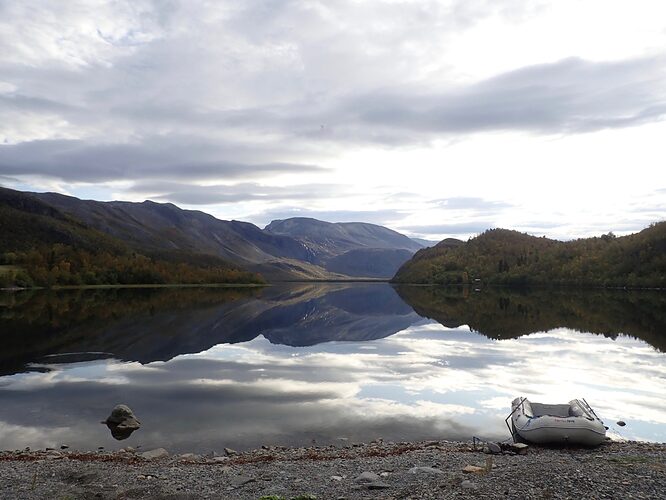 In a study of bacterial populations from 29 Scandinavian lakes, scientists found that some bacteria grow quickly and efficiently on the remains of plastic bags. Their findings may help inform plastic pollution remediation efforts.

Biodetoxification and Protective Properties of Probiotics

Probiotic consumption is recognized as being generally safe and correlates with multiple and valuable health benefits. However, the mechanism by which it helps detoxify the body and its anti-carcinogenic and antimutagenic potential is less discussed....