I am just wondering how you guys deal with setbacks during your peak?

For instance, say you have personal targets to hit during the meet and you know you can reach them, but every time you end up getting closer, it seems the next session takes you two steps further away from it.

So far during my peak everything has been going great. But last night the very lift I have been having a lot of faith in, practised so much and put the most time into (squat) failed me badly last night. It just went all wrong last night. I don’t expect every squat session to be dreams, but last night I just lost faith in it. I have mostly good sessions this peak and a few crappy ones (to be expected, not every session can be awesome), but for some reason my head just cracked and panicked yesterday. I am normally good with getting knocked down and standing back up but last night, my mental state reacted differently.

As a consequence, I didn’t sleep at all last night, trying to analyze every single detail. Probably not the best thing to do to keep your head in the game.

How do more of you experienced guys deal with the mental mind fuck happening during your peaking weeks? Honestly, I feel that the mental side of things really screws me over sometimes and I was just wondering how people keep the course when your head looses its cool.

If you did a complete analysis you may have identified what you did wrong. Like rushing to squat too fast after your walk out, or getting loose in the hole.

Now you can go back through the workout in your mind, and picture the lifts going right. In your mind, thinking about your cues, imagine the details and have a good workout.

Picture the lifts again. Have a great workout in your mind.

If you’re going to think about it anyway, Think Positive. Get some mental reps in.

Picture how great your next workout will be. Mentally execute great lifts.

For more info:
About 25:00 minutes in or so they talk all about mental stuff.

Psychology is Physiology by Josh Bryant

“It might be a placebo effect, but it’s still an effect,” Chuck Liddell said at the same time he was the most dangerous man on the planet.

Placebo effects are real. Belief will boost your probability of success regardless of endeavor.

The New England Journal of Medicine published a study that examined the effectiveness of arthroscopic surgery on folks with arthritic knees. One hundred and eighty patients received arthroscopic surgery on their knee or a placebo surgery. In other words, some received legitimate surgery while others believed a procedure was performed, but in reality only an inconsequential skin incision was done to trick patients into believing surgery was performed.

Patients were examined for improved levels of pain and improved function over a 24-month period. Both the placebo group and the surgery group improved post-op and “post-imagined op.”

Astonishingly, at no point did the surgery group report less pain or better function than the placebo group! Both believed and both achieved.

This study has implications far beyond examining the efficiency of arthroscopic surgery. If you believe you achieve.

Bottom line: The right mindset can produce the same results as surgery. Maybe it’s time to put your beliefs under the knife and transform yourself into the purpose-driven, goal-striving being God created you to be.

“Scientific evidence demonstrates the positive effect of placebo from sham interventions on other conditions, sham-controlled trials of interventions for the treatment of these conditions should be considered to have prospects of benefit as well.”

The placebo effect is not akin to a belief in the make-believe. It is a real physiological response. The effect can be amplified according to the invasiveness of the placebo via the condition being treated, environment, and the expectation of the participant receiving the placebo.

According to the Journal of Medical Ethics, placebo pain relief is a product of the release of endogenous opioids and endocannabinoids. In other words, your belief gives you a dose of morphine.

Expectations and beliefs augment the placebo effect; expecting pain relief produces pain relief. A placebo literally causes your brain to release chemicals that will act like feel-good drugs without the chance of developing an addiction or receiving negative side effects. The Journal goes on to say, “Additionally, expectation of relief can decrease pain via dopamine release in reward centres of the brain.”

Belief can work like powerful drugs! Sham means bogus, but there is nothing bogus about believing and getting a response that produces real-world results.

What if you took this attitude of expectancy to being a great prizefighter or powerlifter? I promise you will be more successful; your mind and body are an interrelated link, science proves this.

Austin Smith, a 15-year-old Michigan teen, lifted the front end of a 2,000-pound car off of his 74-year-old grandpa. This skinny kid was able to do this by “committing to the pull”—the pull was lifting the car off of his grandpa. The right mindset is critical to lifting heavy weight.

The legendary Vladimir Zatsiorsky has stated that most people are able to use about 65 percent of their muscles’ potential strength, but trained weightlifters can use about 80 percent and can potentially do 10 percent more in a contest. The mind limits the body and the two are an inseparable, integrated unit. If your mind is weak, you will be physically weak.

I am not advocating to venture into a life or death state of psychosis every training session; too much fatigue would be imposed on your central nervous system. Training with a focused, aggressive attitude can get you to the 80-percent range of total strength used and beyond in training, maybe 90+ percent of absolute strength in competition. Max effort strength is the largest amount of force that can be produced under voluntary conditions. Absolute strength is the greatest force that can be produced under involuntary conditions, measured in a laboratory setting.

Approaching absolute strength is nearly impossible, something most people will never scratch the surface of. The right mindset can serve as your game changer!

In Mel Siff’s monumental classic Supertraining , he writes about how the development of strength is related to the number of muscle fibers that fire simultaneously, which is entirely a function of the nervous system. Guided mental imagery or self-talk to produce more rapid efforts can recruit a great number of muscle fibers at a faster rate of firing. The result is lifting more weight.

Brain activity proceeds movement, and it is vital that correct movements are visualized long before those movements are performed. Visualization techniques were utilized by top Russian and Eastern block coaches for decades before receiving more widespread acceptance in the western world. No two great fighters fight exactly the same and no two deadlifters deadlift exactly the same. Being able to visualize your optimal technique is crucial to becoming a “master of sport,” as they would say in the old eastern block! 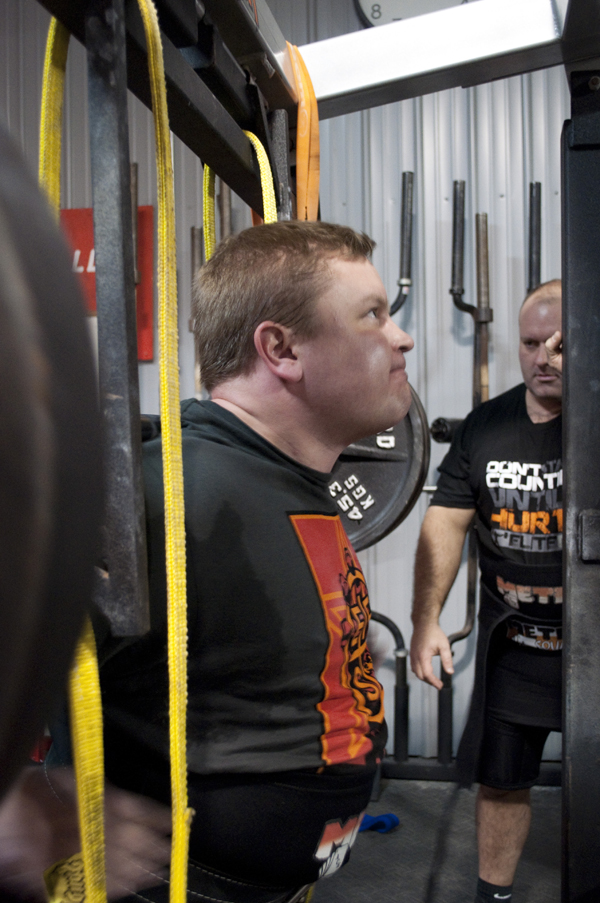 Again, focus and discipline are necessary for maximum performance. See yourself succeeding and don’t over-psyche or get in extreme emotional states.

To be the best fighter, weightlifter, or elementary school teacher, you need to see yourself in that light. This is not a feel-good exercise in futility. This will make your body literally produce drug-like effects that will help propel you to that next level.

Set a specific goal and strive for it! Man has a built-in success mechanism and does not operate efficiently without striving for a goal. REMEMBER SPECIFICITY—making more money this year is not a goal, making over six figures in a year is.

A squirrel that has never experienced winter still instinctively knows to store nuts for the winter. You have this same mechanism: success begets success.

Your central nervous system cannot tell the difference between a real and an imagined experience. The more vivid, the more real. Get the mind to work and the physiological mechanisms will follow.

2 weeks out from my meet my bench felt amazing.
1 week out it was 50% slower than the week before.
Day of the meet my bench was fantastic.

You’ll be fine. I’ve had the same experience a week or two out and crushed it at the meet. At least you’re better off than my current situation. I’m supposed to have a meet tomorrow and I came down sick. Because I usually train through stuff like this (ear infection caused by allergies and congestion) I know I could still perform decently but it will be better for me longer term to skip the meet and start training for the next one Monday.

You’re confusing how you feel with something that actually matters. Stick to your plan. You’ll be fine. How a lift feels one day means absolutely nothing.

How one bad day impacts your performance on meet day is up to you. Quit or don’t, it’s your call.

You need to know what you are capable of and not let one bad day make you forget it.

I genuinely had to read up on this. By the looks of it. It’s a legit study. Big sample size, double blind, randomness, control group.
Its just hadlrd to believe.

This is from some guy named James Clear’s website. I can’t find a link to post, but the study was Anabolic Steriods: the Psyillogical Effects of Placebos. Arial and Saville, 1972.

Power of Placebo: What Happens When You Believe You’re Taking Steroids.

Fifteen athletes were scattered around the room. Everyone was looking at Gideon Ariel.

“We’re going to give you steroids,” he lied.

It was 1972 and Ariel was conducting a study on athletic performance with his research partner William Saville. On this particular day, the two men were offering the athletes an interesting proposition.

Ariel explained that the study would last for 11 weeks. The athletes would lift weights for the first 7 weeks and those who made the most improvement during that period would be rewarded with Dianabol, an anabolic steroid, for the final 4 weeks of training.

What the athletes didn’t know was that the researchers were lying to them. After the initial 7-week training period, the scientists randomly selected six athletes as the winners. However, despite being told they were getting real steroids, the athletes actually received placebo pills.

What happened next surprised everyone.

Four weeks later, when the researchers conducted the final test, the athletes set all-time personal records in every exercise tested. Before the placebo pills, the lifters added an average of 5.8 lbs (2.6 kg) to their squat during the first 7 weeks of training. After they believed they were taking steroids, they added an average of 41.8 lbs (18.9 kg) in just 4 more weeks of training. That’s a 7x increase in nearly half the time.

The evidence was clear. Every athlete got stronger simply because they believed they were on steroids. They expected to improve and so they did.

Genuinely insane results. I wonder if there is a way to consciously make use of this?

It’s not exactly the same thing, but the Westside Max Effort method really brainwashes you into a positive mindset.

Basically you use exercise rotation, avoiding true limit lifts, and really small jumps in weight to set up Always hitting a new record or PR. Every max effort workout is your best ever. It feels like you’re constantly progressing and winning and training is awesome.

Never really seen West Side. But I see your point. It’s positive metal visualisation.
Ive used this loads in sport. And in the gym (before my work sets I always run through my sets in my head).
The mind is a power ally and a terrible enemy.