Also, Matthysse - Garcia on the undercard is going to be bad, fucking, ass.

team money all the way

Should be a great fight though. Alvarez should push Mayweather into fighting I imagine, and maybe give him a few problems a long the way. God imagine the fucking craziness on boxing forums everywhere if Canelo knocks May out.

I got Matthysse over Garcia by brutal KO in mid rounds.

Ishe smith vs molina… Ishe smith SHOULD be a great fighter but hes a fuckin choke artist, not to be disrespectful but shit, every big fight he’s in he either doesn’t engage enough or decides to bring it far too late.

Garcia to win. I rate him. Not as high as his fathers trash talk though.

Did anyone see the weigh in? Alvarez on the scale, hype or not, the intensity in his eyes! I’ve never seen anything like it. It sent shivers down my spine lol. He wont lose due to lack of belief.

Perhaps time will tell, but what has Canelo done to gain such a huge following? Or even reasonable debates he could beat Floyd?

Genuinely not trying to dismiss him because of any prejudice, its just this is Floyd Mayweather! Alvarez is clearly of a certain standard, but having seen his fight 2/3 times against Trout, I cant help think he should come up well short. He gets hit a lot, his conditioning seemed sub par, he went for large parts of the round without doing much. And I think most (?) feel the scorecards were overly generous, and he perhaps won the fight by 2/3 points. Obviously Trout is an excellent fighter, but he’s not Floyd

I just feel if anyone is likely to get the KO after the 6th round or so it will be Floyd. Could this be another Hatton?

Is the Canelo backing on the basis he will KO Floyd? I certainly think that’s more likely than him winning UD

I just rewatched Mayweather vs Alvarez- if Mayweather allows canelo that much contact time this could be a very difficult fight for him.
I favour Mayweather but feel this is a risky fight for him.
Alvarez is- potentially- the perfect foil.

wait, I need something clarifying. is it just a 152 catchweight (not rehydration weight)? does canelo only have to meet 152 at the
weighin the day of the fight? I thought I heard he had to fight at that. if so…how much weight can canelo potentially gain?! he fought Trout at 171 on the night!

also, whats this about his height advantage? canelo listed as 5’9 all of a sudden? every photo I see Floyd looks taller.

Whats more, showtime list Canelo as 5’7.5 in his fight with trout less than half a year ago?

side note: Canelo is ice cold!

Day before weigh in- rehydrate as much as you like

Floyd is obviously the favorite, but if he’s going to lose, it will be to Alvarez. Alvarez is going to be significantly bigger and heavier than Floyd, and is a legit puncher.

Either way, I am too excited to breathe.

[quote]LondonBoxer123 wrote:
Floyd is obviously the favorite, but if he’s going to lose, it will be to Alvarez. Alvarez is going to be significantly bigger and heavier than Floyd, and is a legit puncher.

Either way, I am too excited to breathe. [/quote]
Concise, thumbs up.

Aight, I read an article on BadLeftHook that I pretty much agree with in terms of how this fight COULD go… 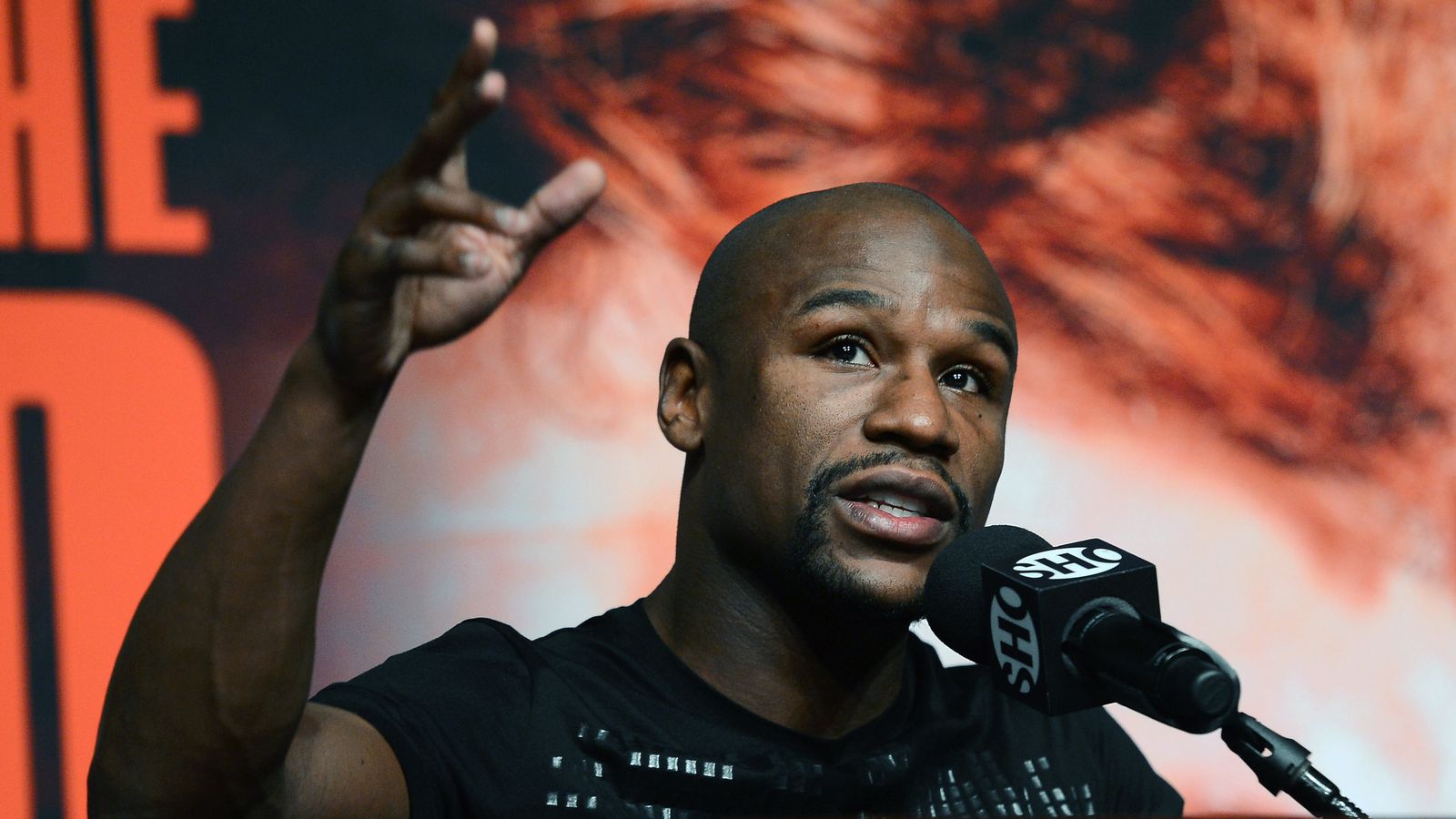 Steve Janoski returns to Bad Left Hook with a look at Mayweather-Canelo, and what ultimately is Floyd Mayweather's biggest opponent: Father Time.

That being said, I think that Canelo’s got a pretty fucking good shot at taking this. It could just be the perfect storm here - a young, strong opponent who throws punches in bunches and is tough as nails going against a guy who’s just getting old.

It’s a recipe for, if nothing else, a great fight.

Oh, and Matthysse by absolutely brutal knockout. Garcia has NO fucking chance.

MAJORITY DECISION?! Tell me, what round did Canelo win?

that Garcia kids not bad eh

Someone has to sit down CJ Ross and ask her what she saw to score it, 114-114. Fucking blind.
I thought Garcia was going to be killed, but damn, got that jab going, nice combos and can take a shot. Good win and hopefully more respect…

Garcia made me look like a jerk! haha. It happens. Great fight on his part, I did not think that he could fight backwards as well as he did.

Yknow I don’t think we give his technical mastery enough credit. Hand speed, reflexes, these are all things we can say decrease with age, but his sense of timing and control of distance is just second to none. Amazing.

Canelo clearly hurting in the press conference. he looked heart broken. felt bad for the kid. carrying so much weight on his shoulders, not only for mexico but the majority of the boxing world, all at age 23! he came up disappointingly short in reality and I think deep down he was 100% confident in his ability.

BUT this was one of mayweathers best ever performances imo at least. 36 but the guys in incredible shape. absolutely incredible conditioning. beforehand he was talking about how sharp he was feeling and it showed.

really hope this fight makes canelo and doesn’t hit him too hard. hes still so young, he doesn’t need to rush anything.

Some interesting video clips from the fight. 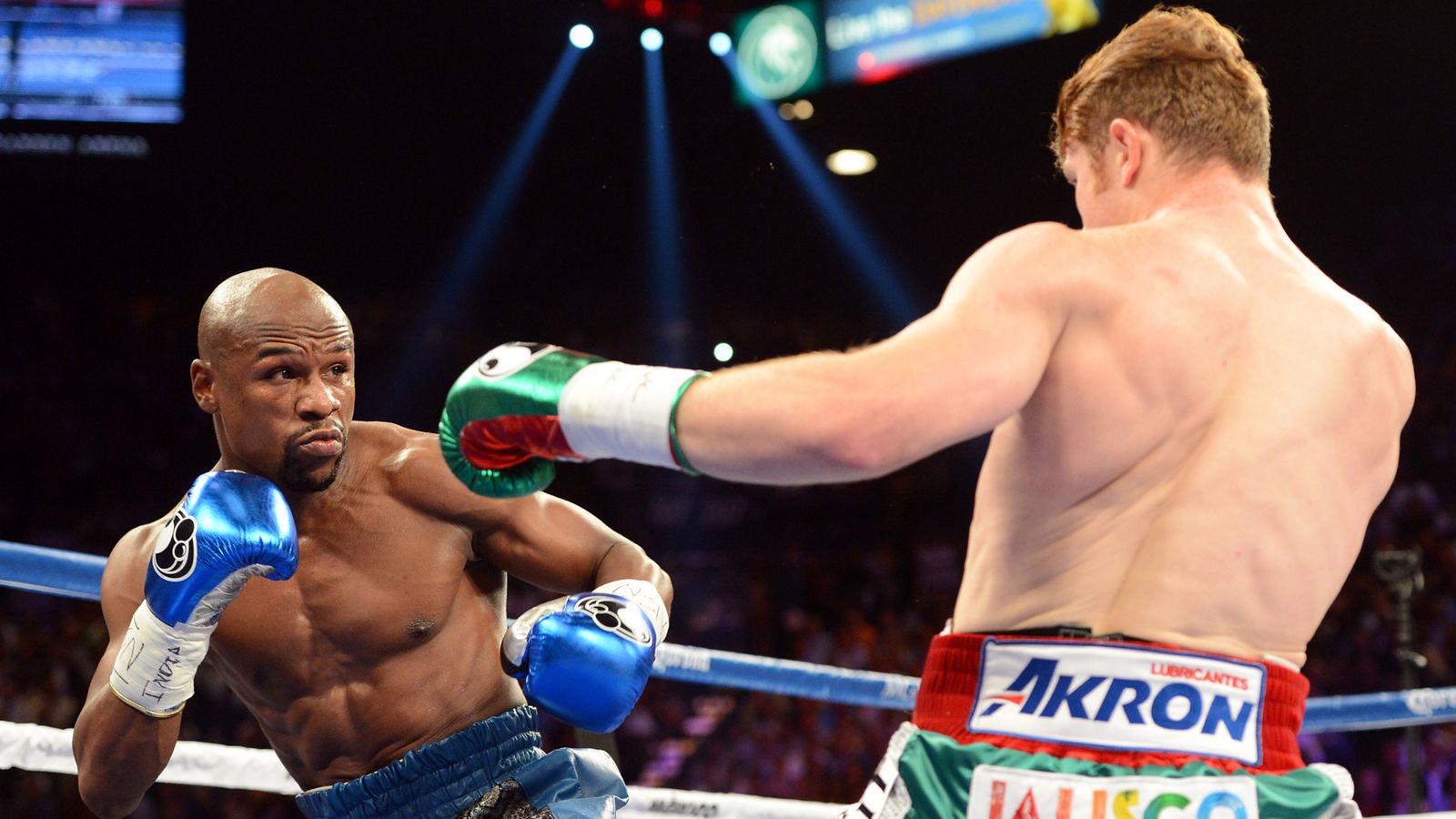 Get results, highlights, and gifs of all the action from Floyd Mayweather vs. Canelo Alvarez, live right here at Bloody Elbow.

Yknow I don’t think we give his technical mastery enough credit. Hand speed, reflexes, these are all things we can say decrease with age, but his sense of timing and control of distance is just second to none. Amazing.[/quote]

naaaa. hes far too intelligent for that. what for? hes already achieved more than Hopkins. I don’t see him taking punishment for the sake of it. u gotta no when to quit. and Hopkins clearly doesn’t. its admirable in one respect, winning a world title at 48, but hes clearly been damaged by it. just my opinion at least.

Well… another hyped up fight that unfortunately didn’t match expectations. I mean no disrespect to either fighter; you can’t fault Alvarez he clearly did his best but was overmatched and you can’t fault Floyd for being masterful. I was just hoping that finally someone would be able to push Mayweather. Looks like it’ll still be a few years until that happens at the rate he’s going. That’s assuming he doesn’t retire first

I don’t think anyone will get close to Mayweather now, so long as he doesn’t do anything stupid and fight on for another 10 years. Floyd is good enough that only someone who is a genuine future HoF and all time stand out fighter will be able to beat him, or even show whether there is any limit to his abilities to do any particular skill - a SRR, SRL, Tommy Hearns type. I don’t see any of them between welter and middleweight. Let’s face it, Mayweather just shut out a guy with 13lbs on him, to the point where Alvarez looked like he was going to cry at points. Floyd totally outclassed a legit contender, who seemed to be showing signs of having the talent to be a standout fighter. I actually feel sorry for Floyd that he will go his whole career without ever getting to find out just how good he is, and that his record will be a list of average or past their prime fighters, through no fault of his own, that will ensure he could never be placed in the top few of the truly all-time greats. I think the fact that Floyd doesn’t put guys away anymore when he is totally outclassing them suggests that he would come up short against the ATGs, but that’s just a personal suspicion.

Yknow I don’t think we give his technical mastery enough credit. Hand speed, reflexes, these are all things we can say decrease with age, but his sense of timing and control of distance is just second to none. Amazing.[/quote]

naaaa. hes far too intelligent for that. what for? hes already achieved more than Hopkins. I don’t see him taking punishment for the sake of it. u gotta no when to quit. and Hopkins clearly doesn’t. its admirable in one respect, winning a world title at 48, but hes clearly been damaged by it. just my opinion at least. [/quote]

Hopkins damaged?? Are we living in the same dimension??

The dude rarely takes any punishment, has been defensively sound his whole career, speaks perfectly and is very articulate at 48 years old.

I agree he’s already achieved more than Hopkins, although some might contend that Hopkins achievements are more impressive.

As to whether floyd goes down that path, idk man, wouldn’t you say floyd has already done everything he needed to do and then some many years ago? It’s certainly no longer an issue of money, lmao thats for sure.