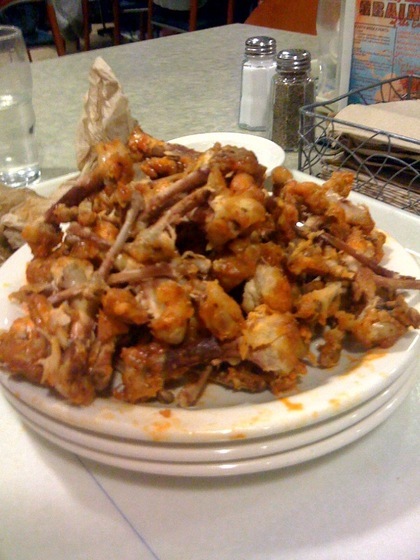 420×560 76.5 KB
I can’t be the only one who gets a little giddy after eating a ridiculous amount of food, so much so that I make a point of taking a picture.

I figured we could use a place to post pictures or stories of times we’ve eaten more than our fill.

To start it off:

I’ve eaten an entire chicken in one serving + hella bread. this defn tops that! good job!

Man, I’ve won at least 10+ t-shirts from eateries and diners that claimed they had huge menu sizes…

The worst ones I can remember was a four-pound hamburger and its accessories, a three-foot long burrito (fucking INSANE).

I do remember eating 20-30 (don’t know #) of Hooter’s hottest-flavor wings was really intense, though. Not hard on the stomach, but more on the mind. Widowmaker squats have a strong opponent.

Couldn’t fall asleep horizontally. Too much pressure on the esophageal valve. Had to sleep sitting up. Lol.

Always gives me a good laugh…worth the time going through them. It’ll definitely make you want to clean up your diet.

Well not as much as some of you but im a youngster and you can be sure my biggest meals are still ahead.

/btw those are 2 different meals not one lol.

I’m going to a crawfish boil with my girlfriend tonight, I plan on setting a new PR today.

I did a restaurant eating challange at this place called “Harold’s Diner” in Hilton Head. I had to finish a 4 lb burger and a pound of fries. That was tough, but I got a T-shirt!

I had 4 bowls of cereal once…

16 large pieces of pizza. and then a nice walk over the brooklyn bridge

[quote]waylanderxx wrote:
I did a restaurant eating challange at this place called “Harold’s Diner” in Hilton Head. I had to finish a 4 lb burger and a pound of fries. That was tough, but I got a T-shirt![/quote]

How many wings is that? My record is 56 during the spring of my junior year in high school (at Pluckers in Austin, TX on all you can eat night). The other day I had 38 wing stop wings with room to go, prolly coulda hit 45 and walked out hehe (I’m good with wings).