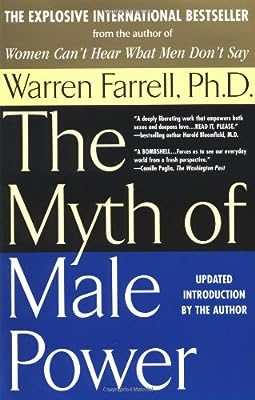 The Myth of Male Power

Men who make their way through the interminable subtitle and embark on this orignal and significant study will find that they haven’t lost the ability to cry after all. While some feminists may assert that it is an attack on women, the book attempts to show areas in which males operate at a disadvantage without claiming that women are responsible for their plight. Psychologist Farrell stresses economics, pointing out that the 25 worst types of jobs, involving the highest physical risk, are almost all filled by men. He also considers warfare, in which virtually all of the military casualties are men; the justice system, where sentences for males are customarily heavier; and sexual harassment, which has become a one-way street. He concludes with helpful advice on “resocializing” the male child, adolescent and adult. 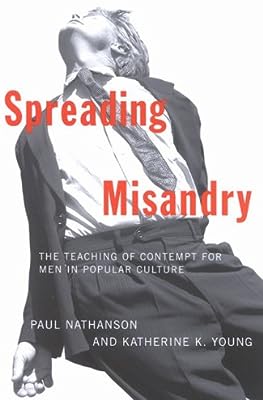 Spreading Misandry: The Teaching of Contempt for Men in Popular Culture

“It’s about time! Spreading Misandry is a major achievement in raising awareness of how men are insidiously and indifferently attacked in popular culture.” 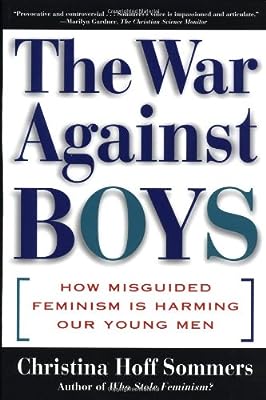 The WAR AGAINST BOYS: How Misguided Feminism Is Harming Our Young Men

Sommers’s conclusions are compelling and deserve an unbiased hearing, particularly since they are at odds with conventional wisdom that paints girls as victimized and boys as emotionally repressed. “Routinely regarded as protosexists, potential harassers and perpetuators of gender inequity, boys live under a cloud of censure,” she writes, going on to show how they are also falling behind academically in an educational system that currently devotes more attention to the needs of girls. Pointing out that “Mother Nature is not a feminist,” she also dismisses the current vogue to “feminize” boys, calling social androgyny a “well-intentioned but ill-conceived reform.” Instead, Sommers champions “the reality that boys and girls are different, that each sex has its distinctive strengths and graces.”

Sure to kick up dust in the highly charged gender debates, Sommers’s book is at its best when coolly debunking theories she contends are based on distorted research and skewed data, but descends into pettiness when she indulges in mudslinging at her opponents. Perhaps the most informed study yet in this area, this engrossing book sheds light on a controversial subject. It deserves close reading by parents, educators and anyone interested in raising healthy, successful children of both sexes. 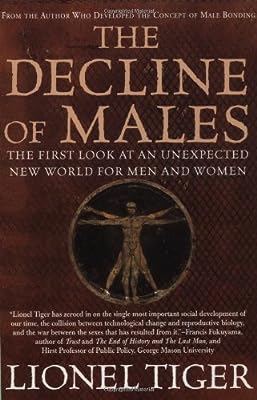 The Decline of Males: The First Look at an Unexpected New World for Men and Women

Males have declined into bewildered, lonely creatures since “new and effective contraceptive technology, controlled by women” and the “anti-male” discourse of feminism have led to a pervasive social shift away from “male-centered production to female-centered reproduction.” With the advent of the Pill, men have become from the “means of reproduction” and the demand for abortion has risen.

The ancient mammalian unit of mother and child has morphed into a “bureaugamy,” as single mothers find government assistance a more satisfying partner than a confused male. Or so says anthropologist Tiger (Men in Groups, etc.), who claims that only Darwinian biology can satisfactorily explain these changes and pities anyone foolish enough to believe the “Christian Science about human behavior” known as gender studies and sociology. This “psychosexual weather report” will delight those who find sociobiology convincing, but may vex readers who want more than newspaper articles offered as science (118 references to the New York Times alone).

It may also be news to many women that they are “on the way to winning” the war between the sexes and will soon dominate the world economic system. Somewhat paradoxically, Tiger celebrates single mothers as the heroic vanguard of a new social order in the “human zoo,” yet proclaims that it is men who have been “liberated” by the women’s movement. Although provocative, his arguments won’t withstand much serious scrutiny from points of view outside biology that may not see humans as analogous to bats and tadpoles

Organizing excerpts from a variety of Western literary sources into eight broad sections–the Chivalrous Man, the Gentleman, the Wise Man, the Family Man, the Statesman, the Noble Man, the American Man, and the Invisible Man–Newell traces what he sees as “an unbroken pedigree in the Western conception of what it means to be a man.” What Is a Man? promises to “inspire men and boys to reach for the seemingly lost ideals of honor, heroism and integrity,” by providing “a source to which concerned readers could turn for guidance and inspiration, a path back to the wisdom of our shared traditions of manly virtue.”

This approach will work particularly well if your opinions are closely aligned with Newell’s; the inclusions reflect his affection for the traditional conception of the masculine demonstrated by the likes of Sir Thomas Malory and Thomas Bulfinch. But even if your masculine ideal differs, the book still makes for a fascinating compendium.

Building on his 2000 anthology What Is A Man?, Newell’s latest book on “how to be a man” challenges the stereotypes about uncaring and belligerent bearers of XY chromosomes. Tracing ideas of manliness through the work of such Western writers as Aristotle, Homer, Jane Austen and Ernest Hemingway, among many others, Newell argues for a return to traditional ideas of manhood to inspire young men “to treat others-and themselves-with respect.” He reminds readers that men need “the five main ingredients of a satisfying life”: love, courage, pride, family and country.

Through the ages, Newell writes, love meant sensitivity and nobility, while courage and pride were about “the struggle to defend and extend justice and to overcome our own baser instincts.” Somewhere along the way, though, the image of the traditional “manly heart” was lost, and men turned to misogynistic machismo and senselessly violent behavior to prove their manhood. Newell insists that a balance among the five manly virtues is the key to reversing the contemporary man’s detachment from loving-kindness and his tendency toward “brutal spasms of reactive violence” (such as the Oklahoma City bombing, the Columbine high school massacre and the 9-11 attacks).

Those resistant to reducing men-and women-to a set of “natural” character traits take note, for this book certainly considers the Mars/Venus school of thought a flawed accomplice in undermining all that is positive about men and their potential contributions to a just and happy society. 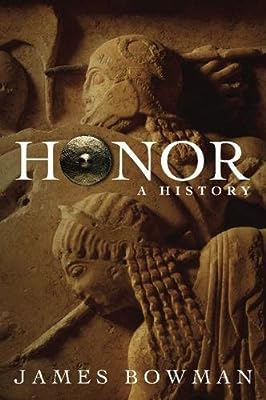 The first complete survey of this subject, tracing the evolution of honor as an ideal from the Greeks onward. The subject is in the cultural air at the present, as antagonists argue over whether the “honorable” course is to persevere in Iraq or withdraw and as the honor of U.S. forces is tarnished by the prison abuses scandal. The importance of honor is present in the earliest records of civilization.

Today, while it may still be an essential concept in Islamic cultures, in the West, honor has been disparaged and dismissed as obsolete. In this lively and authoritative book, James Bowman traces the curious and fascinating history of this ideal, from the Middle Ages through the Enlightenment and to the killing fields of World War I and the despair of Vietnam. Bowman reminds us that the fate of honor and the fate of morality and even manners are deeply interrelated. His book is an indispensable document in a time of growing concern about the erosion of values. 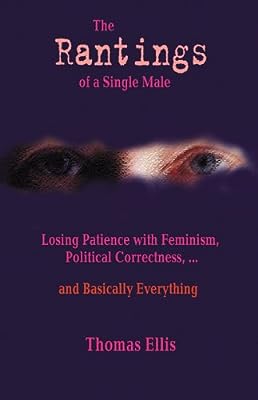 The Rantings of a Single Male: Losing Patience with Feminism, Political Correctness... and Basically Everything

Unlike so many other publications that approach human sexuality, feminism, and political correctness from an academic vantage point, The Rantings of a Single Male gets personal. Drawing upon encounters with both foreign and domestic women, American writer Thomas Ellis offers up this collection of highly original stories, satire, and social commentary. Running the gamut from hilarious to tragic, these rants employ dark humor to illuminate the many absurdities of our gender culture.

A central theme is our willingness to nurture lower standards of female responsibility and sanity. Ellis is unapologetic and unrestrained in his handling of women’s history, women’s spirituality, gender norming, implants, affirmative action, rape hysteria, pornography, homophobia, and bad dates. Deep, dark, and disturbing, The Rantings of a Single Male is destined to become a gender wars classic 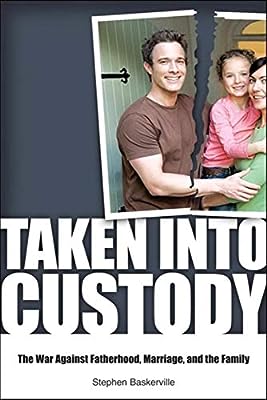 Taken Into Custody: The War Against Fathers, Marriage, and the Family

Why is the American family in crisis? Taken Into Custody argues that the most direct cause is the divorce industry: a government-run system that tears apart families, separates children from fit and loving parents, confiscates the wealth of families, and turns law-abiding citizens into criminals in ways they are powerless to avoid.

Taken Into Custody explores:
Why the “deadbeat dad” is not only a myth but a hoax, the creation of government officials and lawyers who plunder parents whose children they have taken away
How hysterical propaganda about domestic violence is destroying families, endangering children, and making criminals of innocent parents
The real causes of child abuse and how the abuse industry willfully ignores them
What drives the rash of “parental kidnappings”
How family courts operate as if there is no Bill of Rights, denying parents their constitutional legal protections

Taken Into Custody exposes the greatest and most destructive civil rights abuse in America today. Family courts and Soviet-style bureaucracies trample basic civil liberties, entering homes uninvited and taking away people’s children at will, then throwing the parents into jail without any form of due process, much less a trial. No parent, no child, no family in America is safe. 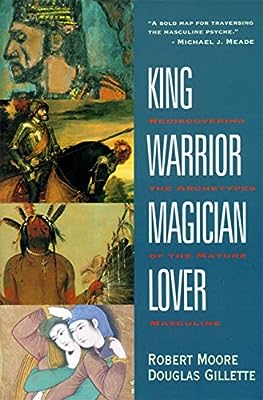 The corporate “yes man,” the wife-beater, the hot-shot male junior executive and the emotionally distant father are all boys pretending to be men, observe the authors of this liberating guide to self-transformation. Writing within a Jungian framework, they perceive symptoms of “Boycaps per book psychology” all around us–in men’s abusive behaviors, passivity and inability to act creatively.

To help males become more nurturing and mature, Moore and Gillette identify four archetypes of masculine energies from myth and literature: the Lover, brimming with vitality and sensitivity; the Magician, guider of the processes of inner and outer transformation; the selfless and wise King identified with Adam or primordial man; and the Warrior, whose energies often go awry in destructive activity. Dream analysis, meditation, Jungian “active imagination” and ritual processes are among the tools set forth in a clear, concise map to territories of masculine selfhood.

^^This one is a personal favorite.

Before the gals get all mad, women can take real majors also, and men can and do take silly majors like women’s studies.