Has anyone seen this before?

What a cruel bitch - what, she couldn’t have told him before he took her onto the court?

Yep. Quite pathetic. She’s a hottie and the whole time I kept waiting for him to turn around just to see his expression. Once he did, I started laughing. Fucking kid looks like he’s 16 with some kind of goofy pencil thin beard. She probably thought they were just friends, all the while he’s got grand plans of gettin’ hitched. I can’t understand people who feel the need to do shit like that in public. Especially an arena…

I saw a clip just like this from a Knicks game I believe, and it ended up being a hoax that the guy and girl set-up as a joke.

Staged. I have seen if before. Actually there are several.

the mascot was my favorite part. so thats all i have to do for a free beer?

If this is real, then that’s fucked up. What a bitch.

dracbest’s avatar looks like sam cassell is trying to be E.T.

If that’s real, that’s pretty cold by the girl. The same thing happened at a Houston Astros game last year, where the girl rejected a marriage proposal.

I think they do it in public so the other will feel pressured to say yes by all the people.

Good for her for sticking to her principles, if it’s for real.

It would’ve been crueller to say yes and then when they’re sitting down again say “You know I was only saying that right? It’s not happening.”

If anything, the guy is an idiot for proposing and not knowing the answer already. Or at least having an idea.

Definitely fake. The announcer even says it’s prank (happened the day before Valentine’s Day) towards the end of the clip.

This has happened a few other times and they’ve all proven to be staged.

I did see a real proposal at an indoor lacrosse game on Friday. Talk about romantic…what a story to tell your future children.

“So Mom, how did Dad propose.”

“Well son, we were at the Colorado Mammoth indoor lacrosse game and during one of the timeouts he got down on one knee and proposed. I said yes and the Mammoth ended up losing. I should’ve known that the marriage was doomed from the result of that night.”

Fake! Bad acting, overacting mascot, and the guy grabbed a beer to drown his sorrows… Too forced. I can’t tell if McGrady thought it was real, but he laughed anyway. Not nice!

Is it just me or do marriage proposals happen in every other Mets or Islanders game that I go to?

The woman looks like a tranny. Maybe homo marriage is illegal there.

Nah, Homo marriage is legal in Texas, I mean just look at the place.

[quote]Malevolence wrote:
Nah, Homo marriage is legal in Texas, I mean just look at the place.[/quote]

nah, a true cowboy would’ve lassoed that bitch and tie her up by the feet just so he wouldn’t be embarrassed again. 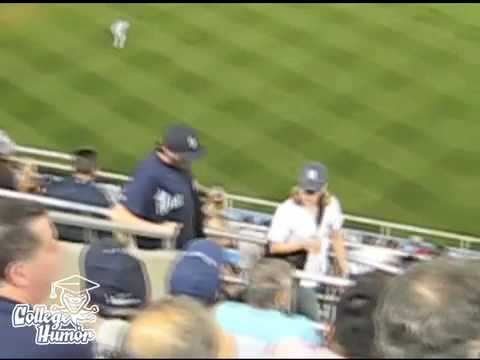 [quote]tmoney1 wrote:
If that’s real, that’s pretty cold by the girl. The same thing happened at a Houston Astros game last year, where the girl rejected a marriage proposal.

Yeah, those damn Houstonians are fucked up.

[quote]Malevolence wrote:
Nah, Homo marriage is legal in Texas, I mean just look at the place.[/quote]

That’s a cruel one. You sure are earning your name.

if its real i would have ike turner’d the bitch