Ok, I know this is nothing new, but I gotta rant here… I just got home from the gym, and had a very interesting exchange with a handful of what I would guess were early high school kids. I was training earlier than usual today as the schools are closed for Veteran’s day, so because I wasn’t really pushed for time like I usually am, I thought I would offer a few pieces of constructive advice as these kids (most obviously the ‘leader’ - you know the one, the kid with some genetic predisposition of a bicep so everyone else follows him) had no clue how to properly perform most exercises. All I did was point out how I was performing the same exercises as they were albeit in a very different manner in order to actually promote muscle growth. What I got in return was:

Now I certainly don’t think there’s anything wrong with reading various authors and trying to understand why they present exercise selection, rep ranges, tempos, you name it, in the way that they do. BUT, if you’re going to not even execute the individual movements in a proper manner, just what magic do these sheep think is going to happen overnight so that they wake up and suddenly look like Ronnie Coleman?!

One thing I have learned through all my years of training and competing, is that even the most basic program, if the movements are done in a proper manner to elicit a response, will lead to progress if your diet and other areas of recovery are in place. You don’t need any special protocols, no fancy equipment, and you certainly don’t need to follow your favorites IFBB Pro’s current routine.

That’s it… I figured if I was gonna bitch n moan about this, I’d share with others who ‘get it’. Gonna go get me some dinner. I know of one person who was in that gym tonight who had a productive shoulder workout.

lol thank god the few times I’ve offered advice to someone they were actually glad they got it. I bet these kids had imaginary lat syndrome too

you better not be dissin FST-7 Stuart. Hany Rambod is a saint.

we gonna have a fight

Try having to lift in your highschool weightroom 2x a week because of wrestling captain’s practices. Its upsetting.

Nice of you to put the effort in Stu, don’t let this one experience deter you from trying to help others. A lot of times people will be real idiots but if you help even one person its all worth it as long as you don’t let all the others stress you out. 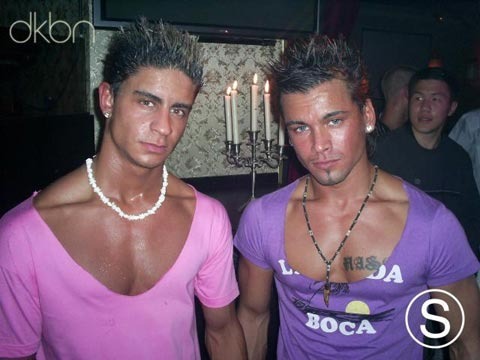 Stu, you’re too patient and too helpful. Perhaps its all your years spent as a teacher.

Unless these douchebros want to learn, just let them twist in the wind for a few years until they either finally get it or give up. You can’t save them all.

I was watching a guy boosting his ego today doing hs machine rows with 4 plates on each side slinging his entire body and doing lat pulldowns on the cable machine with 200lbs slinging his body to a point where his back was parallel with the floor. I didn’t bother helping though he seemed like he was having too much fun with bad form and checking out his 13 inch arms in the mirror after every set. Sigh oh well I’m sure most of us have gone through periods of shitty form while begginning this life long lifting endeavor and hopefully everyone realizes what they are doing wrong at some point and fixes it.

one look at you and you’d think the pack leader would follow your advice. but I guess next time you should wear your pro cards around your neck and wear a shirt a size too small so the bros know wassup.

don’t worry though. I’m sure they’ll all sign up on here asking why their magic program failed to elicit monstrous gains.

Now, if you’ll excuse me, I must go potentiate my CNS with high-threshold, synergistic, neuractively explosive innervated fiber recruiting reverse squat rack pyramid stutter clusters. Otherwise, my nervous system will be snoozing until the very end of my session and all that effort will be for naught!

Stu would explain to you all what that means, but he doesn’t want to give away the REAL secret of the pros… and besides, we didn’t spend all that time uncovering the highly classified, Top Secret training methods of former Soviet super athletes (the ones BANNED from past Olympics due to their obscenely questionable progress from competition to competition!) just to give it all away… though if you PM me by midnight, tonight, I can get you in on an EXCLUSIVE discount that we have reluctantly decided to throw out to the public FOR ONE NIGHT ONLY after holding on to this program for the exclusive use by pro athletes and Hollywood super-celebs for YEARS now.

I’am a teenager and I totally would take advice if the guy giving me the advice is more advance than I am, but there are some real nasty high-ego low-result guys that think they know everything and disrespect the more advance builders.In most cases these guys give up after a few months.

[quote]ColinD624 wrote:
Stu, you’re too patient and too helpful. Perhaps its all your years spent as a teacher.

Unless these douchebros want to learn, just let them twist in the wind for a few years until they either finally get it or give up. You can’t save them all.[/quote]

I’m reminded of the old Shawn Ray story where he describes how younger bodybuilders and wanna bes would always come up to him asking for his magic routines, or asking what specific exercises he used to get such great results. His answer… “The same ones as you bro, the same ones as you” -lol.

Aside from being concerned with nagging injuries and specific weak points, my own training now is a whole lot LESS complicated in terms of a structured programs and protocols than it was when I was first starting out. I finally get it when the top pros in old Flex magazines would talk about ‘instinctive’ training. It’s not that they’re just winging it, or screwing around, it’s just that they understand that the quality of the exercise is what gives you the results, not any of the fancy stuff that sells magazines (in which ghost writers often come up with nonsense programs and attribute it to whatever competitor they’re pushing that month).

I never give advice to anyone in the gym anymore, sometimes people need to fail on there own and then start to question why things aren’t are not working and hopefully they re evaluate what they are doing ( in a good way ).

I tend to give advice as a passing by comment. You’d be a great squatter if you got rid of the pad… Good set man, you mite get a better pec contraction if you lower the weight a bit and squeeze at the top.

Just tid bits like that. Seems to go over better than “you suck, fat noob”.

Yeah, maybe I should get rid of the “you suck” ice-breaker I always use -lol.

Yeah, I empathize with your experience. personally if I were feeling generous I’d lie and say “yes of course I’ve heard of him—I’ve used that EXACT PROGRAM before with great results.” -->this gives you instant credibility in their eyes now cuz you’re big and you did their “magic program” then they listen to your exercise technique advice. That’s really the only way some people open up to advice.

Recently these 3 huge bouncer guys have taken to give me advice. I listen to them for form, and disregard everything about nutrition because they’re juiced and I think it’s a different game for them (they drink 800g of carbs in liquid form before every workout, I might eat a potato or an apple…)

Recently these 3 huge bouncer guys have taken to give me advice. I listen to them for form, and disregard everything about nutrition because they’re juiced and I think it’s a different game for them (they drink 800g of carbs in liquid form before every workout, I might eat a potato or an apple…)[/quote]

the basic principle of overfeeding for growth is the same. these guys just happen to have help putting more nutrients where it counts.

totally agree. Those noobs that infest the damn gym just keep growing in number.
I usually give them the dirty look and dont even bother showing them the right way.
JUST IGNORE THEM.
TRAIN INTENSLY.

Be a part animal, part machine, by yourself. You don’t need others STU, only yourself and the weights-