Lol, this is great:

“you shoulda seen him. he was a real tub of shit” LOL

[quote]gregron wrote:
“you shoulda seen him. he was a real tub of shit” LOL[/quote]

Haha, this is why I love this show. I can’t wait for the new season in September. All of the teaser trailers are hilarious.

Awesome, It’s always sunny… is quick becoming an all time favorite of mine. Just wish it didn’t feel like I was the only person in Europe watching it, I drop references to the show daily but they all fall on deaf ears. Such a waste!

I love this show. I was hooked when I saw the Nightman Cometh episode.

Always Sunny + The League makes FX have one funny line-up

Here’s a link to a pretty good interview I read with the gang a month or so ago:

I can’t wait for my favorite tv show to be back on the air, the Jersey Shore episode should be epic.

best show on tv by a mile

Lol,WOW. Danny Devito acts like that all the time,doesn’t he?

“Dayman! Fighter of the Nightman. Champion of the sun. You’re a master of karate, and friendship, for everyone!”

That’s my ringtone. I get a lot of weird looks, but every now and then someone catches it lol.

“You gotta pay the troll toll, to get into that boys hole.”

“Bro, you want some insulin?”

Lol, the new episode was great! 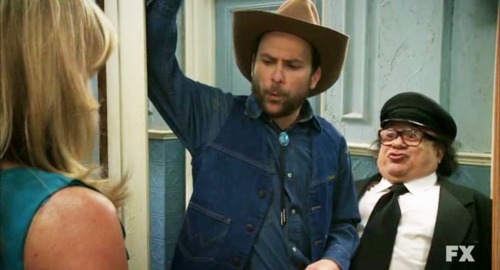 I made a pretty penny in the boiled denim and bridge business.

“I think I’ve been poisoned by my constituents!”

I LOVED the season debut!

Ahh I thought it was so so. The throwing up the blood part with Charlie was just stupid.

[quote]strungoutboy21 wrote:
Ahh I thought it was so so. The throwing up the blood part with Charlie was just stupid.[/quote]

I agree you with about the blood. I thought the concept was funny (I ate like a thousand blood caps) but the whole 3/4 angle thing with the hose is so old and played out.

Kind of like fart and burp jokes. You can have an amazing movie or show just bogged down by stupid juvenile tricks.

But again, I did enjoy the rest of the episode overall, personally.

I was shocked when I read he only went from 165 to 205. He does not carry the extra weight well.