In the last while I have read quit a bit about some of the top lifters in decades past, like Ed Coan, Kirk Karwoski, John Kuc, etc. The thing that really stands out is that these guys were using very low training volumes compared to what is common nowadays. More than three work sets was pretty much unheard of. Even now, Dave Ricks’ training consists of working up to a top set of (depending where in the training cycle) 3 or 5 reps followed by some relatively light assistance work which he doesn’t push hard or even increases the weight on. Light squat and bench days are 50%x8x3 sets. And he has the 93kg open squat record at 57 years old.

It has been theorized that the majority of training effects are produced by the first work set, with marginal increases for each subsequent set - but a significant increase in fatigue and muscle damage. Could it be that we could actually make better gains in the long term by simply not training so hard?

Control the volume on the big stuff. Do just enough to get better.
Make up the difference building weak areas with assistance work.

At some point, after a bunch of squatting, there has to be SOMETHING(assistance work) that will do you more good than simply doing more squatting. Something under worked or over looked by squats.

The stronger you get, the less likely you can handle the same set/rep scheme you did in the beginning. Intensity of one or two heavy top sets is now all the body may handle to get the training effect you need to grow.

I still think a good baseline or go to weight and reps with that weight is really important work to put in particularly when you’re beat up, the weight feels heavy that day or a deload is necessary and the baseline will provide that. My baseline is about 70% for one or two sets of 5. That is the minimum I will do and those workouts are typically planned.

Most of the guys in my crew work fives and three’s hitting singles once every 6-8 weeks. Usually we work up to one heavy set on squat and DL and usually 2 heavy bench sets.

I’ve always liked the idea of working up to one top set that pushes me hard and then hit very very high rep pumping exercises after. Seems to be working for all of us.

I’ve been thinking about this too and will drop to a 3 day/week split after my current program, see how it works for me.

The trouble for me is for every guy that trains with v low vol there’s someone else who’s just as strong who does crazy volume (Eddie hall, Jesse Norris etc) and a ton of others who do something in between. So it seems it can really vary depending on the individual.

Id also like to know top lifters have adjusted their training from when they were less advanced to being at the top of the game, and are differences due to more knowledge or if you have to adapt your approach as you get closer to your strength limit… 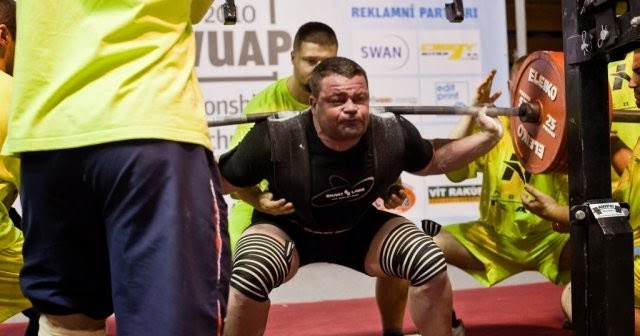 The Best Czech Powerlifter of all times - Martin Kosnar

David Ricks who you mentioned also trains simple, does the lifts and not a ton else, and doesn’t use what you’d call high volume these days. I remember Eli Burks describing his training and it was also bare-bones and not super high volume or frequency. Nick Tylutki, Brad Gillingham, the list goes on in terms of older lifters who train relatively conservatively who’ve continued to improve into their late 30’s, 40’s and beyond. I don’t think it’s coincidental.

Some good points. It seems that high volume is more appropriate for someone looking to gain muscle mass, while someone who is at the top of their weight class (and lean and not planning to get any bigger) would probably be better off focusing on high intensity with only the volume required to maintain muscle mass and prevent injuries. Doing only 1-3 work sets seems to require that you push closer to failure than something like one of Sheiko’s programs that have most work around RPE6-7, so “high” or “low” volume is all relative.

Sheiko actually talked about this in the interview he did with JTS a couple years ago, he said that when you start lifting you have to gradually increase volume (over the course of training cycles and years) but there comes a point where you can’t really do any more volume so you have to reduce volume and increase intensity (as in average and peak % of 1rm). There are exceptions like Alexei Sivokon who did well with ridiculous amount of volume at a lower intensity, but basically you need to figure out what works for you.

I’ve been thinking about this quite a bit for the past year or so myself. Some others that I’ll mention are guys like Ted Arcidi said he works up to a single set of five’s for the squat and dl and his pressing was frequent, a little more volume, but quite modest imo. Konstantinovs is high frequency too, but more of the same, a single set of triples and fives or 8-10’s if he feels like taking it light. The Eddie Sanchez article on alternating squat one week and dl the next is a good one to read and sit and think about. One thing I will say though, is most average Joe’s look at getting their volume in on the back end, drop sets, supplemental, tons of assistance etc,. The really strong lifters get a ton of volume in on their warm up sets. The same Konstantinovs article said one of his workouts took 4hrs for 3 lifts I think. Which leads me to think that they are not rushing their warm ups and treating every single lift as if it were a top set, which isn’t surprising, but alot of people tend to not take 10, 20, 30%, etc too seriously, but in all honesty it’s an opportunity to build the capacity to lift a bigger weight. Another article by Brandon Lilly in which he said Chuck V asked him what his rush was in working up to his work sets and said he should be taking every opportunity he got to accrue volume and quarter, plate, quarter, plate. They say success leaves clues and it’s getting harder for me to not to connect the dots. I haven’t been following the forums and newer articles as much lately, but the stuff that Thibs has been putting out lately for natural lifters is along the same “minimalistic” lines of thinking in one way or another and I always thought he wrote some wild shit in the past. Anyways, long story long, I’m glad I’m not the only one questioning this.

It seems that high volume is more appropriate for someone looking to gain muscle mass, while someone who is at the top of their weight class (and lean and not planning to get any bigger) would probably be better off focusing on high intensity with only the volume required to maintain muscle mass and prevent injuries. Doing only 1-3 work sets seems to require that you push closer to failure than something like one of Sheiko’s programs that have most work around RPE6-7, so “high” or “low” volume is all relative.

Does it seem that way? I’ve read an Eddie Hall article where he recommends training heavy up to 90% one week alternated with training 50% for speed the next and read another article on how he trained for the 500kg pull and never went above 75%. Or the Andy Bolton layout on SS is a good one to analyze, where he works up to 90% over the cycle and says in another article to never work up to over 85% for the squat/bench and 80% for Deads. Or the Sam Byrd article on JTS where he says he trains primarily in the 50% range for speed and manipulates density. Im aware Sam Byrds 50% squat is close to my max and all the paralysis by analysis percentages, figures and methods aside, what sticks out?

What sticks out is that you can get stronger by training with light weights, but how much volume were they doing? Eddie Hall and Andy Bolton are both SHW so it is not a problem if they add some mass. If I add enough mass I’m going to have to compete in 120kg and I’m pretty far from competitive at 105 as it is. Sam Byrd seems to be a bit of an anomaly because he was training so light, he said he got the idea from Fred Hatfield’s concept of CAT (compensatory acceleration training) but Hatfield recommended training at 80%+, maybe I’m missing something. Anyway, Sam Byrd (and Dustin Reed - on this forum) did/do a good amount of bodybuilding work so I wouldn’t really characterize that as low volume.

The more advanced an individual is the less volume he needs. When Coan was younger he squatted 2-3 times a week.

The stronger an individual gets, the more strength he retains, along with the fact that he doe more systemic damage with each set. Lets not also forget chemical assistance.