TL;DR version: I seem to have low stomach acid. It seems to be the culprit behind poor sleep, morning nausea, and nasal/sinus issues. I’d like that to be higher, naturally.

I’ve been dealing with sinus/nasal drainage for at least the last 15 years. Had a few surgeries, trialed allergy meds, corticosteroids, sinus rinses. Really not much luck with any of it.

A year or so ago, a new-ish doc suggested maybe it was “silent GERD” and put me on pepcid and prilosec. Those made things somewhat better, but he wanted me off of them. Mainly he was just wanting to know if that was the issue. Luckily, he was concerned about the long term use of them and wanted me off.

He suggested I stay away from acids, but orange juice actually made me feel better. A bit of research led me to thinking that I was dealing with insufficient acid, rather than too much. Reflux seems to be a symptom of both too much and too little acid. So a few months ago, I tried apple cider vinegar, and that improved things a bit.

More recent research led me to trying Betaine HCL capsules. If I remember to take them (and take enough), this helps tremendously. I also sleep better, probably due to better nutrient absorption.

I’ve read that if I keep the HCL supplementation up over time, I should naturally start producing the right amount of acid and no longer need them. I’m a little iffy on the physiology of why that would ever work.

Is there anything else to try as far as increasing stomach acid levels? 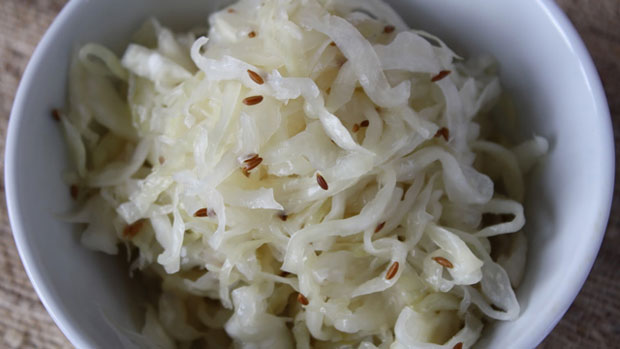 Fixing stomach problems, plus a new look at an old super food that everyone should be eating.

Read this article if you haven’t. The fermentation of sauerkraut acts similarly to HCL pills, although it is a more natural and better option in my opinion. After reading the article, I tried sauerkraut before each meal and noticed better digestion.

Try sauerkraut or other fermented/pickled food before each meal and see if there is any improvement.

Is there anything else supplement or diet wise I could/should be considering, in order to naturally increase stomach acid levels?

In the article he talks about HCL pills. That would be your best bet with supplements. If that doesn’t help, I suggest going to the doctor again/go to a different doctor to see what they say.

[quote]Ripsaw3689 wrote:
In the article he talks about HCL pills. That would be your best bet with supplements. If that doesn’t help, I suggest going to the doctor again/go to a different doctor to see what they say.[/quote]

I’m already using the HCL pills, but I’d like to produce more HCL naturally. Supposedly if I just keep supplementing with HCL, I’ll magically start producing more naturally. Since it hasn’t happened yet, I don’t quite buy it.

Hence the reason I’m looking for other options.

(Nevertheless, thanks for the article link.)

How much meat do you eat? Also, I went through the pepsin/betain treatment and only needed to do it for about 3 weeks? (this was about 3 years ago that I used it)

But basically, it all eventually fixed itself for you?

Sounds like I just need to give it time.

Yes it did… also, are you eating to little meat normally? or just bc of the stomach issues?

What all are you doing currently to help the stomach?

Kombucha is supposed to help with this as well. Really, anything that is supposed to improve gut health I would look into. Best of luck, doesn’t sound fun.

It’s nothing acute; been like this most of my life. It’s not fun waking up every morning nauseous and coughing, when it takes 45 minutes to an hour to actually “wake up”.

It wasn’t until I started approaching it from the stomach angle that I started seeing any improvement.

I can’t really remember what my diet was prior to February-ish, but around then I switched to a whole-milk-only diet. Lived off of that for several months. I’ve moved away from that but I still get a good chunk of my calories from a liquid diet (milk, cream, eggs, protein powder). That’s mainly why the meat is fairly low – I mean, I’m still getting 10-12 eggs a day. I don’t have any problems with solid food though; I’m just still used to a more liquid diet.

Anyway, based on this, I went and picked up another bottle of HCL capsules last night. I’m going to just give it time and see what happens.

I’ll look into kombucha and sauerkraut as options, once I give the HCL some time.