I’m elated I’ve been losing weight! I’m almost to my goal of 195. Downside is, I’m noticing my muscles mass is dropping a bit according to my scale that measures that datapoint (Image below). I will say I’ve sometimes noticed that when I measure, take a dump, remeasure, my muscle mass drops haha. I’ve been hitting 160-190 grams of protein per day, which is close to my goal weight. Is dropping some muscles mass during weight loss inevitable? 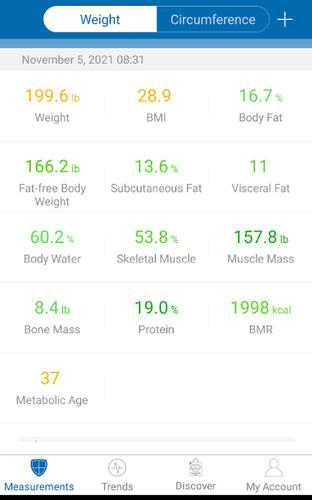 Would not trust that device at all. They can vary a lot. If you are training and getting the protein in your prob not losing muscle unless your in a huge deficit. How many lbs per week are you losing?

Do you have any indicator exercises that you do every week to track strength? If those aren’t going way down, you’re unlikely to be losing muscle.

what does it say when you set it to athlete?

It’s been slower the last 6 weeks. If I take into acount the yo-yo of weight, prob .25-.5 pounds of weight per week.

My compound lifts have lightly increased or stayed the same over the past couple months, so that’s a good sign.

I have it set to Athlete Mode.

How long have you been cutting? It sounds like months.

I think you’re more likely to loose muscle the longer your defecit goes on.

I started in earnest around May.

And now you’re really close to your goal, but progress is slowing down a little.

I did 5-6 months in a deficit earlier this year. I was pretty worried about losing all my muscle by the end. Then some guys who were leaner than me said you probably won’t risk losing much muscle until your body fat gets below 12-14%.

Who knows? Maybe it’s normal to have a little doubt when you’re just about to reach your goal?

I’m getting punked by my scale! I was actually thinking of pursuing a goal of 185 once I hit 195. Maybe I should maintain for a month in between?

Maybe it’s normal to have a little doubt when you’re just about to reach your goal?

I totally agree with this. We humans are masters of self-sabotage

Man, the body does weird stuff after you lose weight for awhile.

In July, when weight loss had slowed down I decided I had had enough of deficits/cuts/structured eating and started eating more, trying for “maintance.” Eating a little more made me lose another couple pounds. I had to actively stuff my face for awhile to Progress to “maintance” calories.

There were a few times between January and late June where weight loss slowed down and I lost motivation/energy and ate “normal” for a few days. Usually I would gain a pound or 2 temporarily, then weight loss would start up again and progress nicely for another month or 6 weeks.

I wouldn’t be worried about a short maintenance period after you hit 195, before you push for 185. Its probably a good idea to give your body a little break from the defecit.

If you’re now committed to the New goal of 185, and you feel kinda Blah, right now, consider taking a little maintenance break Now. Fill up your muscles, recharge and regain the Eye of the Tiger before making a new push.

Curious what kind of scale this is. 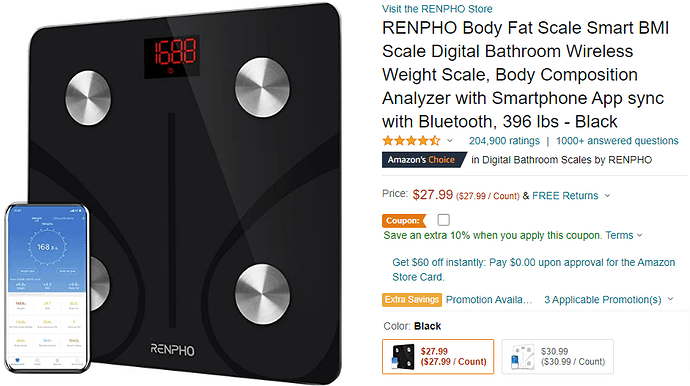 An update, now my issue is I’ve hit a wall. I’ve been stuck at 200-204 for a month now. Wondering if I’ve held the caloric deficit for too long? My doctor told me to pay for a nutritionist, but not sure I need it since I’m just trying to cut 15 more pounds. Seems like I may need to hit my maintenance calories for a bity vs. -500-700 per day. Thoughts?

I wouldn’t be worried about a short maintenance period after you hit 195, before you push for 185. Its probably a good idea to give your body a little break from the defecit.

If you’re now committed to the New goal of 185, and you feel kinda Blah, right now, consider taking a little maintenance break Now. Fill up your muscles, recharge and regain the Eye of the Tiger before making a new push.

looks like maybe a few weeks at maintenance would be a good idea, but if you are already at a 500cal daily deficit - this equates to 1lb loss per week, ie 4lbs/month. Have you recalculated your maintenance calories since you lost weight? you’re down ~20lbs from starting and that will have some impact on RME.

Still, i recommend a short term break as @FlatsFarmer suggested.

Appreciate this, advice and article were helpful. I haven’t recalculated, I based my caloric intake on a BMR for a 195 pound guy (1,826). I was typically hitting under that caloric ceiling by 200-700 calories daily, which I thought would accelerate weight loss. When I calculate my daily calories, I’m deducting for exercise. Based on what I’m reading, since I haven’t hit 195 yet I could at least hit or slightly exceed the maintenance calories for that weight for a bit.

The fuck kind of scale are you using? A scale should only tell you your weight

Are you telling me that your daily caloric intake is between 1,126 and 1,326 or am i misinterpreting? 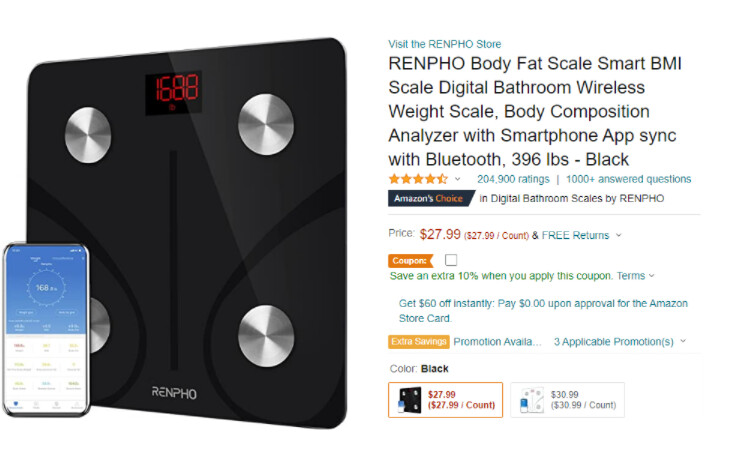