I think this is way worse even than what Zumbo did. HS precision has taken an endorsement by America’s favorite nursing mom murderer. 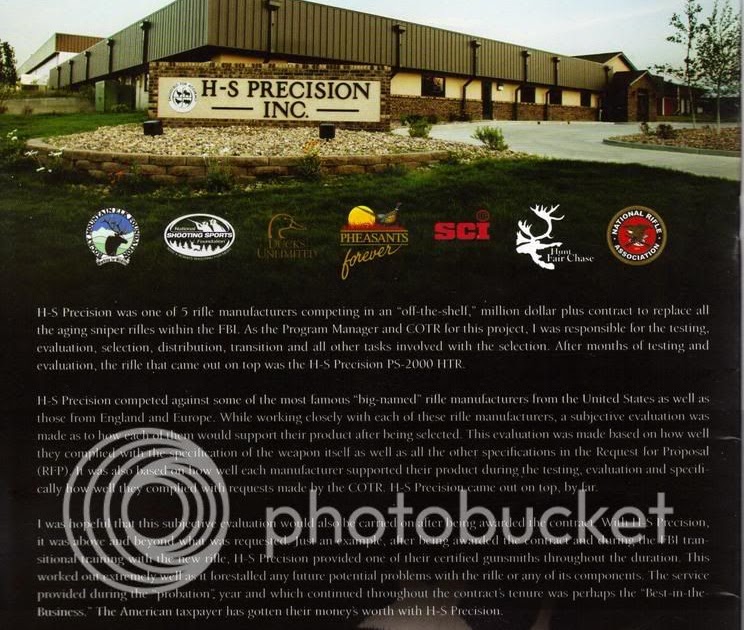 { Via AR15.com .) This should be enough to make every freedom loving American vomit.  HS Precision, manufacturer of stocks and other parts...

That is seriously f*cked up. Ruby Ridge should have ended with jail time for Horiuchi and the rest of that team.

I’ve always had mixed feelings about all of this.

I certainly agree that the feds had no business doing what they did. What was that whole mess over? An inch and a half on a shotgun barrel if I remember correctly?

On the other hand, I know how it is to have to pick up the pieces after some bureaucratic assholes have put the grunts in a bad spot. When we are dealing with situations as volatile as that one, mistakes don’t cost people business deals or shares, they cost lives.

I never really studied his reaction after the incident but I can say this…if I were him I would not be involved in endorsing any type of snipercraft items.

I was told of an incident in Europe some years ago where a young sniper missed a shot on a bank robber with a suicide vest. The nut blew himself up and killed a few hostages. A few years of agony later, the sniper killed himself over it.

Not saying Horiuchi should have committed suicide over the incident. Just making the point of how grave something like that is.

Not appropriate at all for him to be involved in this endorsement.

[quote]JD430 wrote:
I’ve always had mixed feelings about all of this.

I certainly agree that the feds had no business doing what they did. What was that whole mess over? An inch and a half on a shotgun barrel if I remember correctly? [/quote]

It’s a bit more complicated than that. The feds were trying to get him to become their stool pigeon, and infiltrate a white separatist organization. In order to do this, they were trying to entrap him into violating the Firearms Act by sawing off a bit of metal from an otherwise legal shotgun.

Randy refused and refused, but the undercover BATF agent was most persistent, and finally old Randy took the hacksaw out and Broke the Law. When the BATF gleefully told him that the only way to avoid prosecution was to sell out his white separatist friends, Randy again refused.

Thus began a campaign of harassment that culminated in the siege of his Idaho property, the shooting of his son and his son’s dog by US Marshals, and the assassination of his wife by Lon Horiuchi.

Not saying Horiuchi should have committed suicide over the incident. Just making the point of how grave something like that is.

He is supposedly a professional sniper. Either we are to believe that he is so unspeakably incompetent that he mistook an unarmed woman with baby for an armed man (which is a blatant violation of Rule 4: Be Sure Of Your Target), or else he intentionally murdered Mrs. Weaver. Either way, the man has irreparably dishonored himself.

Judging by his last name, I would say that Mr. Horiuchi comes from an ancient samurai family, which likely has very firm ideas about irreparable dishonor. I strongly suggest Mr. Horiuchi follow the example of his ancestors, and remedy the situation appropriately (see illustration above).

But here’s my question: how the hell did HS Precision screw this up? I’m too much the optimist, so I’m going to pass on saying that it’s because they were sucking up to the feds. I’m not particularly sure he’s well-respected even amongst the feds.

My guess is that some suit that has never fired a gun in his life googled FBI Sniper and sought an endorsement from the first one he could find…or it’s some guy who was getting canned who wanted to say F’U to his former employers.

“Pound for pound, dollar for dollar, there is no better off-the-shelf rifle than the Mannlicher-Carcano 6.5mm carbine. Even for moving targets, firing at great distances at impossible angles, the Carcano delivers rapid multiple hits and flawless performance. I give it my utmost endorsement.” --L. H. Oswald

[quote]BH6 wrote:
That is seriously f*cked up. Ruby Ridge should have ended with jail time for Horiuchi and the rest of that team. [/quote]

I posted this in another thread, but since Lon has his own thread and a silimar question has been asked …

Horiuchi was charged in state court with involuntary manslaughter. He removed the case from state to federal court, where it was dismissed on the basis of the Supremacy Clause of the Constitution, i.e., he was just doing his job and following orders (sound familiar?).

The dismissal of the state manslaughter charge was overturned by the US Court of Appeals for the 9th Circuit. The case went back to state court where the county prosecutor quickly dismissed the case stating, “It is unlikely the state will be able to prove beyond a reasonable doubt the criminal act set forth”.

I can’t believe HS would use him as a spokesperson. As a shooter it is almost beyond belief.

I’d put him in the same boat a Janet Reno. What they hell were they thinking.

Awesome parody. Can I use this in a post on another site?

Awesome parody. Can I use this in a post on another site?

…and of course I meant “Oswald.” I must have been listening to Black Sabbath when I wrote that last post.

That is superb. Did you do that?

That is superb. Did you do that?[/quote]

That is superb. Did you do that?[/quote]

H-S hacked again. It appears whoever hacked it before has posted a link explaining the story behind Horiuchi and their efforts to obtain an explanation from H-S.