There is quite a bit of discussion again on the age old topic of load versus time under tension (TUT) for drug-free hypertrophy.
For example, Dave Tate’s recent programme striving for 30sec sets, this month’s Iron Man is also again heralding the 10X10. Others, e.g. Christian Thibaudeau, are more synonymous with heavy low rep sets.

Having experimented quite a bit with load progressions, I’m trying to canvass T Nation users on what they believe (from personal experience) is optimum for hypertrophy: load versus TUT? Or a periodization programme using both?

I never maximised either method though until i nailed my diet.

If you want to bigger, why wouldn’t you just add 200 lbs to all of your lifts?

Huh, TUT pretty much takes care of itself as long as you don’t just drop the bar on the negative…

Both. Everything works, but nothing works for very long. I have employed both and been quite pleased with the results thus far.

Really, TUT over a workout is what’s important, or over a program - not just over one particular exercise etc. 30 second positive and 30 second negatives are generally considered mildly retarded, despite an ‘optimal’ TUT for growth. It’s more complicated than one or the other, but I agree with C_C; TUT will take care of itself unless you’re doing an incredibly low volume/low rep program, in which case you’re probably not bodybuilding focussed anyway.

Besides, when we talk about ‘volume’, in fact we’re basically increasing TUT. 3x3 for strength, 10x3 for growth has been espoused by some (not always popular) authors; 10x3 will have increased TUT while still letting one keep the loading relatively high.

TUT with a heavy load. You cant take a rank beginner that can only bench 80lbs and expect them to get good results lifting 60lbs for 45 seconds. This person needs to be lifting “heavy” with sets that are 1-8 reps and lasting <15 seconds. They will not only improve their strength faster this way, but will get bigger faster.

In a very short time, this person could be benching 1-1.5xBW. THEN, they can go ahead and start using TUT to get bigger.

And as mighty stu stated; it will only work for so long. So after doing TUT for a cycle or two with say 1-1.5xBW, this person might go back to lifting for strength, and get up to 2xBW before doing it again.

So both matter, but neither alone will get you good results. Anyone that tells you to just lift heavy, and that TUT does not matter, is just plain wrong. This is why olympic lifting, short duration sprints, and 1rm lifting isn’t the common method of building size. AND, people dont usually go run a marathon to try to get HYUGE.

I think its pretty safe to say, that hypertrophy sets should most often last 15-60 seconds, with the majority being right around 30-40. And sets <15 seconds, and >60 seconds can be used to enhance the abilities in the 30-40 second range.

Load is the hamburger and TUT is the pickle.

There is a huge glaring confusion for many on the idea of TUT. Drop the idea of forcing a per set definition on TUT and apply it to the total workout.

Purposely slowing down to achieve TUT is idiotic as a principle. Force = mass x acceleration. Classically applied TUT works opposite of what we know to be scientifically true. Doing those assanine tempos like 3031 forces you to use a lesser load and purposely seeks no acceleration. You couldn’t produce a better anit-hypertrophy training idea if you tried.

Now, looking to achieve a higher TUT as Tate has done is fine for short cycles or to be added at the end of a workout. Remember the final “pumping” set thats decades old?

The real benefit to properly applied TUT focused training is the endocrine response and potential capillarization. Tourniquet training is an odd way of achieving the same effect.

But again… the hamburger is the main dish and the pickle is a little somethin’ extra.

hmm I don’t really care with the TUT, until I do a controlled negative, and squeeze the muscle during descent… I try to keep the load “heavy”, and do full ROM reps with slow negatÃ­ves.

Still I think that there’ll be no problems if I just pay attention to this… Sometimes I drop in some static holds or partial reps when I feel hardcore.

So today I got 9 reps on my top-set of flat DB presses.
Actually bothered to time myself, too.
Took me around 30 sec… Which is what Dave Tate recommended in his TUT article…

That’s an explosive positive and 2+ sec negative (hey, I don’t exactly have long arms) 9 times… I don’t know why people are so interested in this TUT stuff… As I said before, it pretty much takes care of itself on practically every decent BB (and even a lot of PL) routine(s).

I think based on what I’ve read so far the suggestion is pretty much what I said at the start of the thread: a combination of both is best. Clearly the correlation between strength and size cannot be dismissed. Sets of low reps will clearly stimulate strength gains, which can then certainly be translated into size gains when that muscle is forced to work for a longer period under a lesser load. The cycle then continues leading to gains in both size and strength.

The question remains which route is more optimum. Clearly someone like Dave Tate was already insanely powerful when he journied into his notorious TUT phase. Realistically you could concentrate on strength gains for months before embarking on higher rep traditional hypertrophy training. At the other side of the spectrum, you could do metabolic work, or even ‘pump’ sets after low rep work all in the same session.

[quote]JamesBrawn007 wrote:
There is quite a bit of discussion again on the age old topic of load versus time under tension (TUT) for drug-free hypertrophy.[/quote]

I didn’t know that the physiology of drug free hypertrophy was an age old topic that was different to drugged up hypertrophy?

Having experimented quite a bit with load progressions, I’m trying to canvass T Nation users on what they believe (from personal experience) is optimum for hypertrophy: load versus TUT? Or a periodization programme using both? [/quote]

Lift heavy, and a good volume, and you’ll get the TUT you need. See all Ceph Carnage’s posts in here.

Personally, my favorite generic structure for a particular exercise is to go 12repmax load, 8RM, 2-4sets @ 4-6RM, 12RM. This changes depending on exercise and body part (like using higher rep ranges to start and finish for arms), but generally gets at least 5 sets in a hypertrophy range.

I don’t fuck around with changing tempo, I just control the eccentric and push as hard as I can on the concentric.

Science says you can get stronger working in a 4-12/15RM range.

Best hormonal stimulation seems to be around the 10RM range, but this isn’t everything.

If anything, best strength and hypertrophy gains are at the lower end of the range (4-6RM).

Then the piles and piles of practical evidence you can read all over this site basically say train somewhere in this range (4-15RM), use a good volume each session, always push yourself harder, eat well and often (especially around workouts), and don’t overcomplicate things. Just work hard.

Are you seriously going to have a stop watching timing how long your sets last? Really? Are you going to be THAT guy in the gym?

Building up to an all out max set usually lasts 20+ seconds because the last 1-2 reps are so damn difficult.

So just do that for 10+ years until you think about TUT (like what dave tate did).

Why do I think people focus on TUT? Well, in my experience working with people who are resistant to going heavy, the excuse I most often have heard over the years is that they don’t want to look “stink” in the gym by failing. No, none of these guys have been especially big, but then again these also tend to be the people (nice size but nothing too big about them, in shape, maybe have some abs) who generally are the biggest advocates of alternative training techniques.

In my opinion, people like to do the holds and stuff like that (check out the Levrone thread for the finger man video), because they want to find easy ways out, easy ways to feel like they’ve worked hard without ever really putting themselves on the line.

I think prof X put it well somewhere else (paraphrasing here); people just don’t want to get under and try to move a weight that scares them. 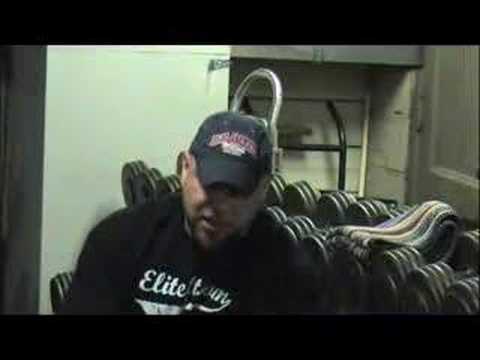 From The Boston Seminar

Great link…That describes me a few years ago. I think its hard for younger lifters just starting out to not get all caught up in the hype that comes through the internet. When I was 17 I began lifting hard, and naturally I wanted to do things optimally so I tried every different program from all the gurus thinking I was going to get the best gains ever with each new program. I was motivated but got suckered.