Lifting with a Chronic Illness

So, I’ve had a bit of an interesting journey so far. I’m a 31 year old dude from Denmark. When I was 25 I woke up one morning suddenly blind on one eye. This led to a longer period of tests and diagnosis that finally resulted in a diagnosis of multiple sclerosis when I was 28. I won’t lie. It sucks.
Apart from the chronic illness shenanigans, I’ve had issues with my weight for most of my adult life. After being a super skinny teenager, my metabolism came to a grinding halt as soon as I turned 20 and I rapidly put on weight untill I weighed in at about 100 kg (I’m 178 cm.)

About a year ago, I had some changes in my life, and decided that it was finally time to do something about the bit of my health that I -can- control. I have multiple sclerosis, but that doesn’t mean that it has me. So, I spoke to a friend who does lifting, and he started me on the Stronglifts 5x5 program, which I’ve been following since. I had two months of illness in December (I’m on immunosupressants for the MS, so when I get ill I get big boy ill) that prevented me from training and put me back quite a bit, but I started up again afterwards.

I was never a strong dude. When I started working out I couldn’t pull off a single pull-up. I do 25 a day now. This is helped by being down to 72 kg at last weighing. My lifts are still pretty damn puny, at a squat of 85 kg, a BP of 58 kg, a Row of 55 kg, an OHP of 40 kg, and a DL of 110 kg. I’ve been eating little enough to lose fat throughout, so I guess that has also gimped some of my progress, but I’m nearing a point where I’m happy enough with my fat %, and I’m happy with what’s going on in the mirror (For the first time in my life) which means that I’m kinda at the “What now?” stage, where I have to start looking at getting stronger and building more muscle.

I have some things with my condition that makes lifting harder. My balance isn’t excellent, so I struggle to go deep on my squats. I have nerve-pains, which vary from light cramps, to pain similar to that of a trapped nerve, to it suddenly feeling like someone put out a cigarette on my skin for a second. My symptoms are made worse the warmer I get.
I’d like to get stronger, and I’d like to build a better body, but I’d like to do so safely. Basically, I’d like to be the best version of me, whatever that means right now. I don’t know what I’ve got coming in the future, but I want to do all that I can while I can.

No real advice on my end…But, I will say I applaud you in your efforts! Allot of people could learn allot from you!

First off I would also like to applaud your progress and determination so far as well. It sounds like your making amazing progress

I also battle chronic illness and train, I would say for anyone training while going through such a battle is to be aware of your own limits the illness sets us up for … And still constantly push them with control. When I started I was 6,1 and under a hundred pounds, I couldn’t do a pushup and was hoping to fix what 7 years of chronic illness took from me. I ended up learning from the best I could about training and it became my passion and I overcame my illness one pound and inch at a time until I was at my peak 217 pounds with a 30 inch waist and 19 inch arms. I wanted to get 20 inches my entire life but fell I’ll again and couldn’t eat solid food for about a year so I lost 40 pounds and now am rebuilding.

If your goal is to attain maximal muscle growth your journey will be a lot easier because you can train in a way which focuses on maximal muscular tension, cellular swelling and won’t add much pain or discomfort to your illness through common problems like joint pain when we constantly strive for more poundage on the bar. However if your primary goal is to be as strong as possible that’s great too and you can certainly attain that training intelligently . You already have a great base for either direction.

I honestly don’t have any certain tips I can give you at the moment, but I will say if you ever have any specific questions about training or dealing with the illness please don’t hesitate to contact me.

I look forward to your success despite the illness and thank you for the inspiration to make me push that much harder I think we all get when we read a story such as yours about a person who despite adversity is looking for results not excuses.

Hey. I’m still here. Still working towards getting fit despite my illness. Been doing good progress, and thinking it’s about time I start adding some bulk. 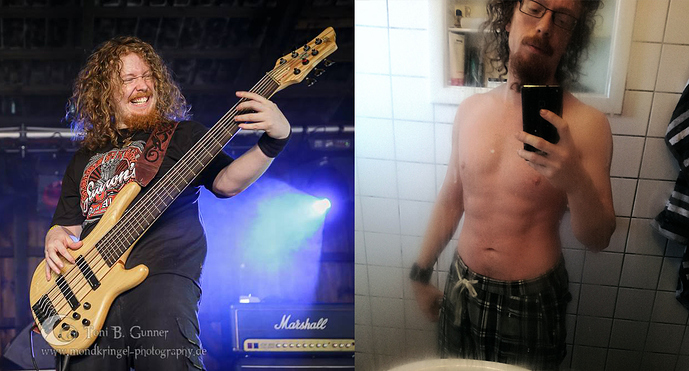 So, I reckon it’s bulking time, but this is where I’m kinda at a loss. I’ve been fat, so I can pack on mass, but I’ve never really done anything in the way of a targeted muscle-building program and diet, and I’m honestly kinda scared of getting fat again. Advice?

Wow dude smashing it! You have better abs than me

My advice is to not be allured into intense bulking via eating a gross surplus of food. Get on a good lifting program and eat just slightly above maintenance, maybe only 250 kcal over your maintenance each day. I personally like my calories around 33% protein, 33% carbs and 33% fat. I’m sure you already know that there’s 4 kcal/gram of protein and carbs and 9 kcal/gram of fat. You’ll put on weight more slowly, but the fat gain will be minimal. If you want to get a little more advanced, (which I personally wouldn’t until you plateau because “keep it simple stupid”) you can always throw in carb cycling and keep carbs high on heavy training days, medium on moderate days and low to no carbs on your off/days you don’t lift.

No advice, but awesome story. Congrats on the weight loss and keep it up!