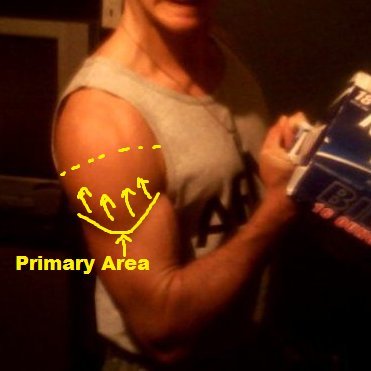 I began working out my freshman year of college. It has been a little over a year now and I am now a sophomore still lifting and increasing my skill. Since then, I have had outstanding results and have really become passionate about ‘lifting heavy-ass weight.’ With this said, I recently have been experiencing fairly dull yet persistent pain in the separation between my shoulder and bicep/tricep area (I provided a diagram of my arm in attached file). The pain itself extends a bit up the shoulder but is mostly focused in the separation area. I rested during Christmas break for about 6 weeks in hopes that it would ‘fix itself.’

Today: After finishing my overhead military press I noticed the same, familiar, nagging pain that I had before the break. After moving to incline it didn’t much intensity but it was apparent that something was wrong when my partner told me my form was off and my right arm was lagging a bit on the lift.

I know it’s silly picture but it was the only one I had on file. But if anyone could provide me with some serious advice in remedying this issue it would be GREATLY APPRECIATED. I want to continue fulfilling my goals and I hope this doesn’t hold me back much longer.

Thanks ahead of time,