The simplified version of the cycle would be like this: 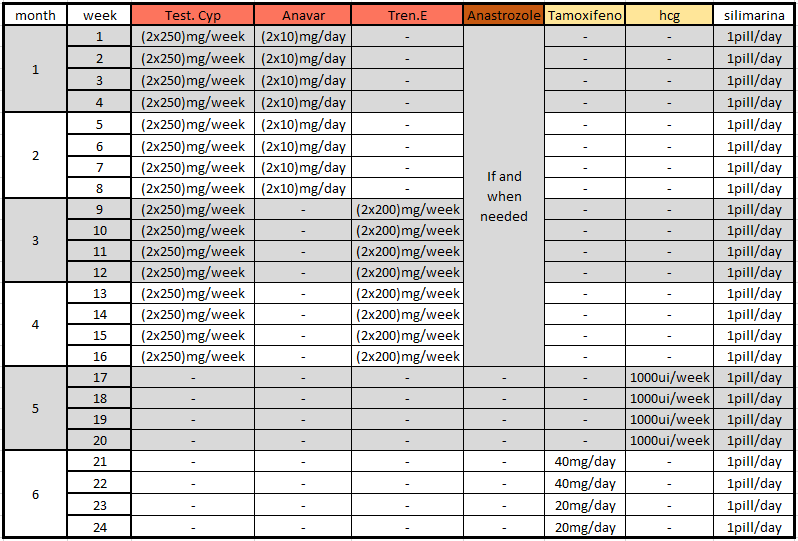 But then, taking into account the time I have and the ordered stuff quantities, the full description of the cycle I am about to do is as follows:

If there is any advice on the specificities of the cycle that you can give me before ordering the stuff, please tell me. I will be much appreciate

Is it ok (advisable) to run HCG while on cycle in the last 2 weeks?
Also forgot to meantion that I pretend to have arimidex (Anastrozol) on hand to take when needed while on cycle. I presume it will be important to take mainly with HCG in the end right?

I also presumed I should take the Nolva at the PCT without the HCG nor the AI influence. Right?

Arimidex won’t stop aromatization from HCG. And you can take the HCG during cycle or post cycle/pre pct.

Thank you iron_yuppie, understood everything.
I will eventually use AI to lower estrogens coming from testC aromatization during cycle, and what I took from your advice and some research is that I also should pay special attention when taking the HCG because if there is a lot of estrogen coming from TestC, the HCG will easily stimulate gyno. So keeping Estrogen relatively low with AI at that time might be advisable. Tell me if I’m wrong.

Additionaly I am wondering if taking HCG for 19 days is dangerous. And if 1000iu/5days is not too high of a dose.
Also leaving 3 days between the last 1000iu HCG pin and the first 40mg Nolva dose (PCT) is ok? Or should I leave more time in between?

I take that everything else is ok with the cycle? Like the doses of Nolva, the prolonged Nolva intake 5months (40/40/20/20/20)… Is everything ok? Or should I adjust something?

Lastly, I am not quite sure when I should take the Anastrozol during the cycle. I think I have like 3 kind of options:

I would like to avoid 3) because its not practical nor economic to do bloodwork every week. But of course if needed, health first.
I am afraid that with 1) i could end up crash too much the estrogen (without knowing) and have sides due to that.
I think the 2) woul be nice, but how can i know if and when I should take the AI based on signs? What are the signs I should pay attention? And what doses of AI should I take then?

I’m no expert, but what about option 4. Start with 0.5mg/week and get one blood test after 2 weeks and assess?

How many cycles have you run before this one?

Some went better than others. Mainly the Var and Tren ones were very smooth except for “Tren Rage”. But Even though I always did my research I limited myself doing what my seller/trainner advised me to. But this time I have been doing a lot of research and I am creating the cycle completely for myself. Thats why I want to understand and questionate every aspect of my decisions and not just take it for granted what similar things were said in other posts.

Why 20mg/day (unless I read that wrong) of Anavar? That’s just enough to do nothing.

Also, don’t take anastrozole unless you need it and you likely won’t. It works very fast so if you end up needing it you can take it right then. The worse thing that can happen is taking it, crashing and feeling like total crap for a while (cutting out valuable time from your cycle).

Originally the Var period was supposed to be 500 testC/week only as I’ve read a lot of times that it is a good cycle for it self (500 testC/week only) which allows fairly good gains for someone as myself that has been with low activity during the quarantine, and then enters the Tren to take things more seriously when I should be back in shape, and able to go further, taking benefit of Tren.

I only added Var because I have an extra flask (100pills/10mg) of it that I need to use before going abroad to do my master thesis. Having said that, I presumed the best strategy would be to spread the Var in the innitial (NonTren) period, just to add a little bit of streght, to easy the recuperation back to shape from quarentine and be stronger to take more benefit of Tren thta will be after.

I also think that the low 20mg Var are a good option since Var followed by Tren would mess my lipids without a rest, so the lower the Var the safer.

Additionally I’ve read studies that 20mgVar/day only in 8 weeks provided nearly twice the mass gain than the non Var group. Dont remember if both groups were on test or not but the logic is the same.

So I presume when people say that 20mg Var does no shit might be people that are allready on great shape and It woulndt do much of a difference. In my case it would only be to leap into shape before Tren giving the Test only phase a bit of a push.

Also, thank you for the anastrozole part. I will keep that in mind

So I presume when people say that 20mg Var does no shit might be people that are allready on great shape and It woulndt do much of a difference.

It’s usually because they aren’t in great shape. If it were me I’d save the Var for another time when you can do more with it and won’t immediately be running Tren for a while right after. I’ve got 200 25mg capsules of Var that I’m holding off until next time since I decided to go another route. Anyways, we both know you aren’t going to do that but I’m looking forward to see how everything goes. Post current pics and then when you’re done post the result pics (and some throughout would be awesome too). Pics really help people plus it’ll generate more attention to your thread and have more people answering your questions. Good luck to you brother.d

and some throughout would be awesome too

Ahahaha thank you xD
I will have to use the VAR anyway, cause I will leave my rent here and go abroad for my thesis for 9 months. Cant leave anything behind.

I am also thinking about doing the following Bloods before starting: 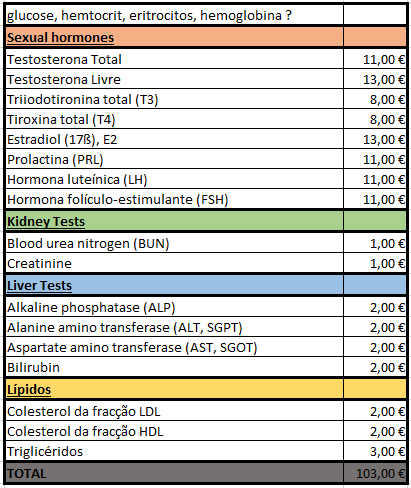 And then just Estrogen Bloods across the cycle, And lastly after PCT the whole bloods again to make sure everything is on place before going abroad.

Sounds enough? Or is something unnecessary? 103€ still takes a tool on me…

The thyroid (T4 & T3) isn’t really necessary if you need to get rid of something. Granted it’d be good to know where you are thyroid-wise but if budget is tight that could easily go.

So I am about to start the cycle and the bloodwork just came out: 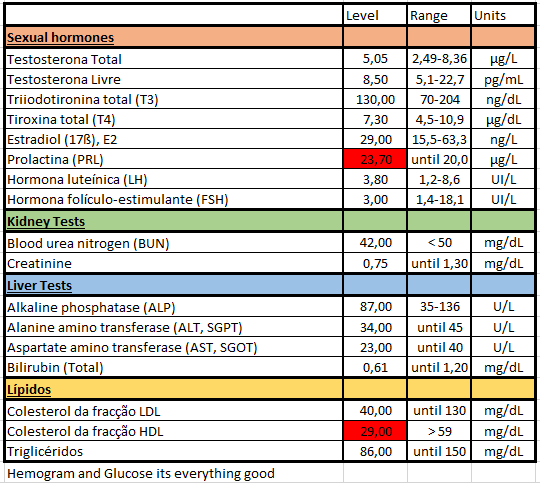 It seems that prolactin and HDL are not very good. I dont understand much about this, but mainly the prolactin worries me. Is it dangerously high? Should I do something? Sould I take Cabergoline now? Even if its at the start of the cycle?
Regarding HDL, any suggestion? Is it problematic?
Thank you

Forgot to mention that I searched about high prolactin symptoms and I have none of them except 1. I have to admit I feel I dont have as much of a sex drive than before the 4 cycles I did in the last 2 years. It’s like it is an enough one, rather than a good one as before when I was natty (2 years ago).

Regarding HDL, any suggestion? Is it problematic?

Your Lipids are very low. What’s your diet like and your BF? Did you run any thing the last 4 weeks?

I havent been on anything at all for 7 months. I dont know my actual BF but I’ve allways been lean. I am usually around 11% (+/-4%). I would say I feel like 13%.
I have been vegan for almost a year now. I avoid fatty things. Eat a lot of carbs.

Your ratio of ldl to hdl is actually good. I have never seen anyone with that low of a total though. Don’t know what to think.

Get P5P for the prolactin. It’s basically an active version of vitamin B6 and can help naturally lower prolactin without resorting to caber, which has some potential side effects.