Larry Wheels Has a Healthy Heart!

Since I am still fairly new around here, what do we consider abuse?

I think this comes down to the individual. Is 1,000 ng/dL average TT abuse, some would say so, but I am comfortable with it.

Like readalot (and the supreme court) said, you know it when you see it. I’ve seen it plenty, and have encouraged change in behavior (actually successfully). A gym buddy of mine cruised on 300 Test, and 700 EQ a week for years (he told me for blasting he just took a vial of Test E 250 a week, and added in other stuff on top), never got blood work or medical screenings (this guy performs minor surgeries on himself, because he hates doctors). After talking with him, I couldn’t get him to go to the doctor or get blood work, but he is down to 400 mg/wk of Test, and doesn’t plan on blasting anymore. He is still abusing, but it’s an improvement. Harm reduction. I knew that convincing him to do TRT doses wasn’t going to happen, but I thought there was a chance he would buy into 400 mg/wk and being able to keep his gains. He looks about the same on the current protocol.

Ahem…that’s tareload. I can see how you would get them confused though.

That reminds me, there’s another huge inequity between the US and other parts of the world…access to legal Rx AAS (assured potency and purity) for those with the money.

With FDA coming after compounded androgens (with NASEM stamp of approval) the funny part is in the not too distant future you won’t be able to get your hands on compounded Test but you will still be able to get compounded stanozolol, oxandrolone, and nandrolone (at least in Phase 1 of the crackdown). 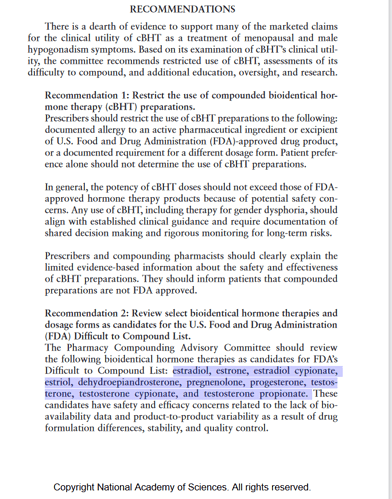 Sad part is ladies will really be affected as they will lose access to compounded T cream. 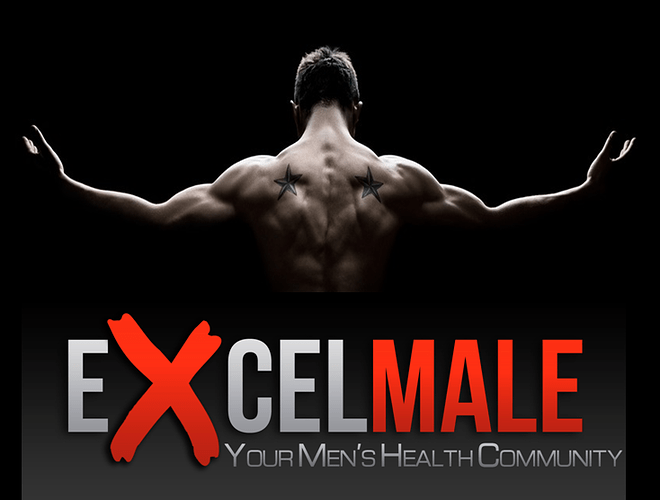 Have you benefited from compounded hormone therapy? If so, you won't be happy with what the FDA is planning. The FDA has never been a fan of pharmacy compounding, but now it looks to be making a move that could keep millions of people from using a...

Having lived through 7 decades we have come a long ways. I recall when no one had low testosterone. No one complained about low T. No one got treatment for low T.

Now it seems half the male population has low T. I have heard it said that more (%) men have low T now, than the 1960’s and ‘70’s. Is this more awareness driven or actual testosterone drop?

What will it be in another couple decades?

I have heard it said that more (%) men have low T now, than the 1960’s and ‘70’s. Is this more awareness driven or actual testosterone drop?

Perhaps it can simply be observed via the near-total feminization of most men (joking, kind of).

It does raise a good point though - perhaps TT% hasn’t lowered and simply the ability to observe these metrics has improved enough to display this as a trend.

I would guess TRT therapy will look considerably different in the next 10 or so years. Delivery process will get seamless, IMO.

We’ve discussed this off and on but I wanted to share this study which would be applicable for men who want to (1) do TRT while preserving fertility OR (2) have done TRT and want to try and recover their HPTA/fertility while maintaining reasonable Test levels. Converting Men From Clomiphene Citrate to Natesto for Hypogonadism Improves Libido, Maintains Semen Parameters, and Reduces Estradiol Obviously Natesto is a pricey option but there is a cheaper option with compounding pharmacy (at least …

Is this more awareness driven or actual testosterone drop?

I would say primarily awareness but partially a decline. The TRT guys love to refer to a specific study that shows generational decline in TT amongst men. Fairly significant decline too. IMO its a flawed study. I will see if I can find it or link you up to the debate over this when I have time.

Keep in mind too, obesity is rampant. Way more so than it was over two decades ago. The average large male tshirt from the 70s/80s is now akin to a small. Obesity plays a large role in reduced TT numbers.

The TRT guys love to refer to a specific study that shows generational decline in TT amongst men. Fairly significant decline too. IMO its a flawed study. I will see if I can find it or link you up to the debate over this when I have time.

Thanks for sharing this paper. Taking it at face value besides the great nice observations from @blshaw Analysis sample To enhance comparability of age distributions across study waves and to allow for analyses of T concentrations by subjects’ birth cohorts, data were restricted to observations obtained on men of age 45–79 yr born between 1916 and 1945, inclusive. This yielded potential samples of 1399, 975, and 579 observations at T1, T2, and T3, respectively. Of these, we excluded all obser…

Doesn’t exactly call for this type of treatment though, does it? 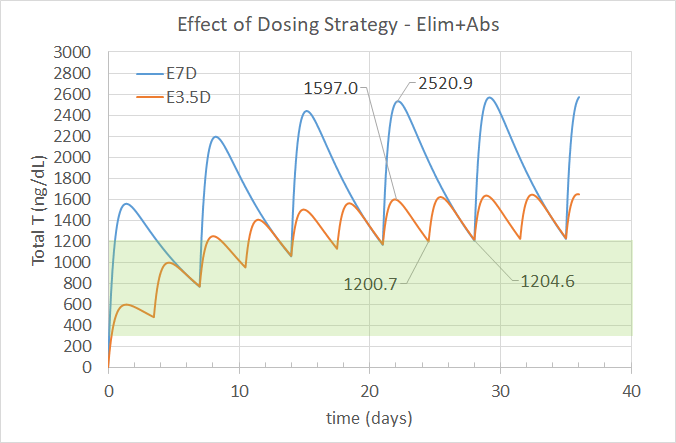 Now it seems half the male population has low T. I have heard it said that more (%) men have low T now, than the 1960’s and ‘70’s. Is this more awareness driven or actual testosterone drop? 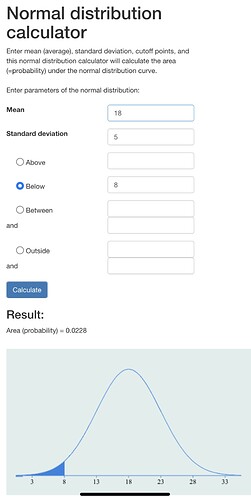 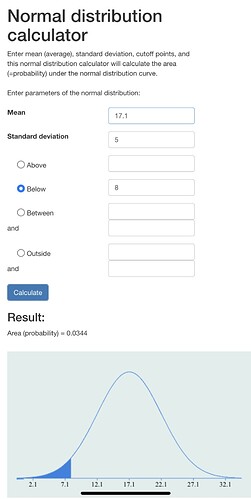 This has been on my mind lately as well. Started AAS at 26 and did a lot of shots in my quads with 21-23g needles. I have two large sections of scar tissue in both legs now, really bothers me. So I use 25-27g needles in delts for TRT and I don’t have any tissue build up yet, but I’m concerned it’s going to be a problem down the road

I’d guess our natural release of testosterone is fairly inconsistent even everything is working like new.

Is the mean change from 18.0 to 17.1 a decade later, the same men 10 years later?
Or the same age men from two different decades?

How was the standard deviation of “5” determined?That seems highly convenient from measured data. Like too nice to be true.

Or, might you have been demonstrating how a shift in the mean of a normal distribution curve affects percentage at any particular Z-score on a flexed specification of low T value.

Is the mean change from 18.0 to 17.1 a decade later, the same men 10 years later?
Or the same age men from two different decades?

My example says it’s men the same age a decade later. (What the studies show)

How was the standard deviation of “5” determined?

I looked at a few studies determining healthy testosterone levels in men. All numbers are accurate in the example besides the 5% drop off per decade. The papers I’ve seen say it’s a bigger drop off or around that number or slightly less. Depends on where you’re looking it up.

Or, might you have been demonstrating how a shift in the mean of a normal distribution curve affects percentage at any particular Z-score on a flexed specification of low T value.

That was the point exactly. Still, the numbers are largely correct.

I thought I’d post it here since it is somewhat related. 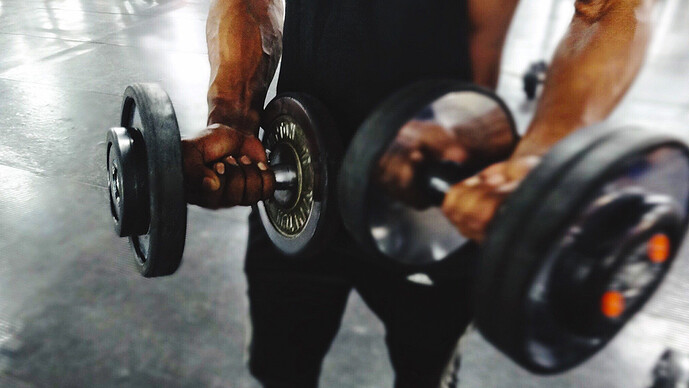 The Real Effects of a Mild Steroid Cycle

Some men use small doses of testosterone for TRT. Others hop on a big steroid cycle for bodybuilding. But what does a medium cycle do?

Some of you may have seen this new T-nation article.

It claims there’s profound benefits to low dose cycling. It says that people say there are less side effects while a study shows there are serious gains. The article ends with the statement that natural and even mild cycling is a big difference.

I beg to differ with all of those claims.

The article also points to guys on low dosages too gain 10 lbs in weeks making it sound like muscle.

I think the article is misleading in a few ways.

And I agree a 300 mg of test cycle in an advanced lifter isn’t going to do much. Consistently I’ve seen this. They guys who really get anything out of gear seem to use a lot of it. Yeah, 300 mg cruise for a year will be a difference.

I have to agree with @mnben87 . From what I’ve seen, the more experienced a natural lifter is, the more gear they’ll have to run to get any real effect from it.

There are no serious gains without serious side effects.

Good point. The one study everyone references when advocating for whatever test dose they think is best is that any amount will build muscle, but they don’t go into the side effects of even a “mild” 300mg cycle. Yeah you’ll get muscle, but are the risk really that much less than 600mg?

I dont think that dude is coming back…

I am excluding TRT in below.

These dudes had some experience and were rated as having about 3 RT sessions per week over last 12 months.

I read the whole article and conclude the trainees are all weak as hell and should not be on any AAS at all at 25 years old. Why in the world would you be on AAS cycle or start AAS cycle with a 100 to 120 kg bench at 25 years old?

Here is an approach that will save you 6 weeks on AAS and claim 300 lb “bench” to your Insta**** buddies: 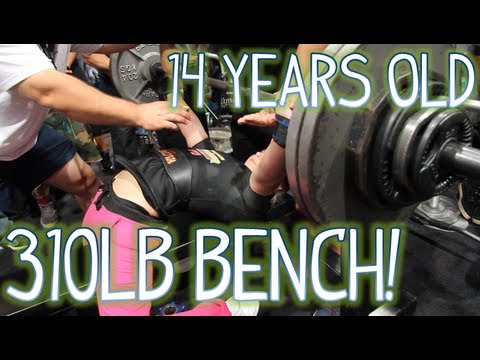 Also, is this child abuse? Discuss? Props though as she is stronger than our trainees in the paper

So what do these guys do now? Go back off? If yes, then what was the point?

Hope the article doesnt give ammo for young dummy to go run a cycle. What do you do after cycle? Post to TNation and ask for PCT info?

Cue the discussion on safe methods.