CERN performed a study to investigate whether such dangerous events as micro black holes, strangelets, or magnetic monopoles could occur.[9] The report concluded, “We find no basis for any conceivable threat.” If black holes are produced, they are expected to evaporate almost immediately via Hawking radiation and thus be harmless, although the existence of Hawking radiation is currently unconfirmed. Perhaps the strongest argument for the safety of colliders such as the LHC comes from the simple fact that cosmic rays with energies up to twenty million times the LHC’s 1.4ï¿½?1013 eV capacity have been bombarding the Earth, Moon and other objects in the solar system for billions of years with no such effects[10].

However, some people remain concerned about the safety of the LHC such as the science watchdog group called the Lifeboat Foundation which has covered these dangers in detail. As with any new and untested experiment, it is not possible to say with utter certainty what will happen. John Nelson at the University of Birmingham stated of RHIC that “it is astonishingly unlikely that there is any riskï¿½??but I could not prove it.”[11] In academia there is some question, albeit among a minority of scientists, of whether the Hawking radiation theory is correct.[12] 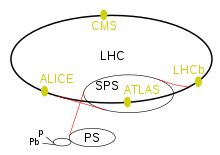 The Large Hadron Collider (LHC) is the world's largest and highest-energy particle collider. It was built by the European Organization for Nuclear Research (CERN) between 1998 and 2008 in collaboration with over 10,000 scientists and hundreds of universities and laboratories, as well as more than 100 countries. It lies in a tunnel 27 kilometres (17 mi) in circumference and as deep as 175 metres (574 ft) beneath the France–Switzerland border near Geneva. The first collisions were achieved in 2...

What do you guys think ? Do we really know enough about this to be fucking around with it? The risks are high. . this could be a step closer however to Faster than light Travel, Teleportation, even Free energy.

I live right next to it and believe me it’s worth it. Such amazing potential for scientific progress.

It’s a bit like the 150lb-ers giving advice to jay cutler. A lot of scientific “professors” are not for the idea because they are not confident in their ability to manage such energy and computations, they have no certainty. But then again, what is certainty in science? The whole scientific method is under scrutiny from a philosophical standpoint; logical positivists, scientific realists…

The people I know at CERN, John Ellis (Maxwell Medal winner), being one of them, are incredibly gifted and I’m pretty confident when I say that this project will be one of the most important steps in science of the century.

(Yes I know my Avatar says I live in Scotland but that’s only throughout “term time”. The rest of the time i’m in Geneva, Switzerland.)

Whoops. I thought it read Large Hardon collider, which is what happens to me every morning when my large hardon collides with the cold water in the shower. Then it isn’t a large hardon anymore, but a shriveled little stack of dimes.

Wow, very interesting stuff. Kind of funny that the most neutral and unmeddling nation in the world could be the source for the destruction of the universe.

[quote]Donut62 wrote:
Wow, very interesting stuff. Kind of funny that the most neutral and unmeddling nation in the world could be the source for the destruction of the universe.[/quote]

lol… who’d have thought! Just like calling a baseball tournament the World Series when only American teams play in it.

[quote]swissrugby67 wrote:
Donut62 wrote:
Wow, very interesting stuff. Kind of funny that the most neutral and unmeddling nation in the world could be the source for the destruction of the universe.

lol… who’d have thought! Just like calling a baseball tournament the World Series when only American teams play in it.

ok ok. Not really but where are the “worldly teams?”

perhaps japanese teams sure but?!

right, dont want to hijack the thread. back to the issue of the LHC

I’m not sure what the big deal is. I have one of those in my backyard. The guy who owned my house before made it and left it when he sold. It’s kind of fun actually. I take the neighborhood kids for rides on it. Maybe we’re not actually talking about the same thing, but everyone calls it the Large Hadron Supercollider.