He posted about it this morning on his IG.

Dante and I both told him it wouldn’t work. But he told me this morning he needed to see it for himself.

I asked him what happened with the change over to the RP training system…attaching our DM about it.

I’ve got over half a dozen people that used that shitty RP system as clients now that are all crushing PR’s weekly, and all have similar stories as JP.

At what point are some of you going to actually realize you cannot train that way and actually grow? It doesn’t f’n work. 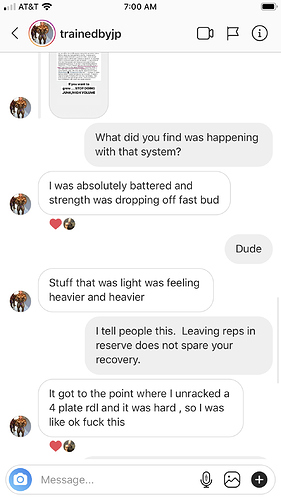 Here’s a sample of a hypertrophy block workout from Juggernaut AI. One guy said it takes him 3 hours to complete the workout. I have yet to see a single person in this group show any muscle gain results from their hypertrophy blocks. If only they knew. 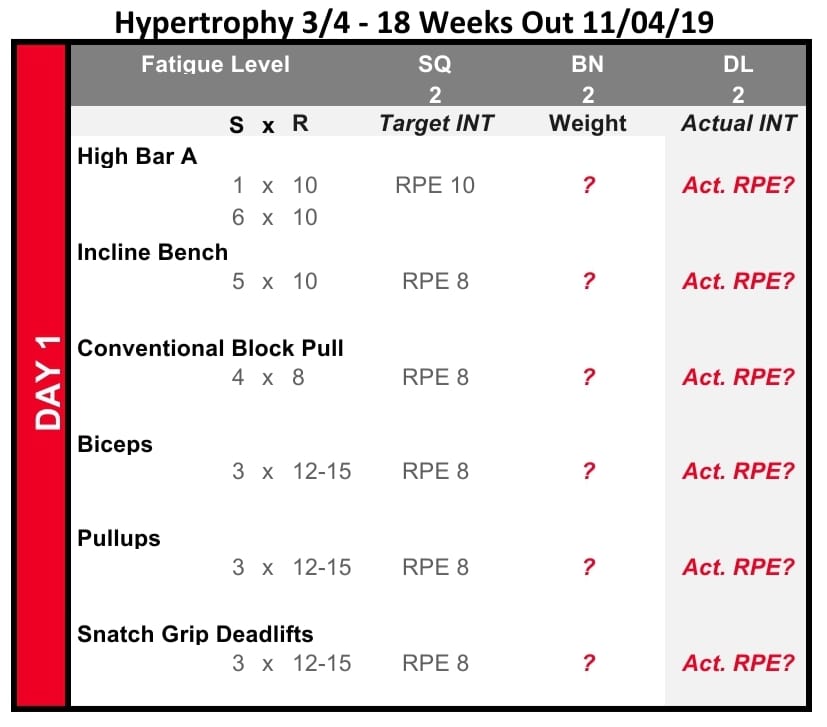 I don’t know of a single person who got better using those RP systems for training.

So why do so many buy into that shit when there’s literally no proof in the pudding other than you’re most likely going to get worse using it???

seriously guys…do you honestly believe you need 25 sets for hamstrings to grow them???

If that’s the case you don’t know how to train.

I don’t know of a single person who got better using those RP systems for training.

I’ve found the progressions on the main lifts and cycle planning/peaking to be useful. I also did PR at the two meets I’ve used it for. People like to think that high volume is hardcore, more is better, and embracing the suck of a high volume program is fun. The regular powerlifting cycles are not as stupid as the photo I posted. That’s just if you check weight gain as your goal. 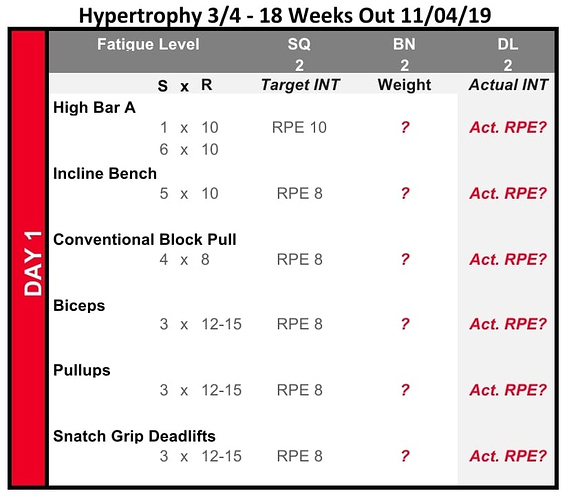 Can anyone tell me what’s REALLY bad about the movement selections here?

Low back takes such a beating with 3 exercises that destroy it.

Too many compound lifts and itll be impossible to recover.

Damn that sample looks rough. I have a friend who does Juggernaut AI for this programming and added 90lbs to his total at 165 in a matter of 5 months. But it also seems like his total only increased 20lbs from then to the next meet 4 months later.

The problem with that training program is that you’re locked into every movement. That is a nice recipe for hurting all over fairly quickly.

Yes for strength, I don’t have an issue with volume and staying away from failure.

Haha on that note, I dont mean to hate on my friend, but I don’t think he’s put on any size

That doesn’t surprise me at all.

It’s amazing to me that people still buy into the ideology that you need to do high volume to grow.

Paul how do you feel about the “small” workouts in your old Big 15 plan with your more experienced opinion now? To refresh your memory they were things like 5x20 or 5x15 for delts/arms/abs kind of workouts.

Does RP stand for Renaissance Periodization?

How would you compare this to John Meadows routines? They use rpe and are moderate to high volume. I’m actually using one of his routines now for a contest next year.

John’s routines are not high volume. He and I joke about this all the time.

There’s ONE BIG SET TO FAILURE.

The last time we trained together John made a joke about this.

“I can tell people “this is a high volume routine” but then they don’t even look to see that there’s really only one big set I have them chasing after.”

John isn’t and never has been high volume.

I think german volume training popularized by charles set the training world back. Charles did a lot of good but his supplement pushing and volume programs didnt help. His 1-6-1 program was more on the right track than gvt.

Ya its a method that goes back like 50 years.