The first time I saw this guy fight, I mean you could tell right away he’s got it. I’m confused though what kind wrestling background does he have with all those crazy throws he does?

He has quite a bit techniques that a lot of guys don’t use…but seems like guys in other disciplines know how to use effecitvely.
The person having their weight forward, and him using their weight to help throw them…works in muay thai well with the clinch with a guy powering forward.

His trick of going for a takedown and quickly coming up and throwing a backward elbow.

I’ve always believed in the power of tricking the other opponenet and making them think that what you are going to do, and then doing something else to catch them completely off guard.

Even simple things like catching people with jabs…I’ve used my right arm and circle it in a motion like I am winding up and can EASILY catch people with jabs…I’ll do it again they think I will jab, but I will actually throw my right.

Just like leg kicks, most opponenets look at the eyes…keep looking down and throw leg kicks…keep doing that…eventually look down, but pop up a high kick to the head.
Havent had a time it hasn’t worked for me yet.

Just a sick style Jones has though, here’s a HL of him with his throws and using body momentum of the opponenet, and his special takedown switch to spinning elbow.

He has Greco-Roman background…can’t wait to see him develop into a special kind of fighter on par with GSP,Silva,etc. To be 22 years old…sky is the limit for him.

He is phenomenal and very young. Unfortunately he would still get ragdolled by the top 205 lbers like Shogun, Machida, Rampage, Evans, Thiago Silva and the uncrowned 205 champ Anderson Silva. In another year or 2 he beats them all except Anderson. Although it was an illegal strike he deserves a NC for the Hammil fight not a loss, Hammill was done.

Jones has a greco background, he went to the same school I went to - for a year or two.
that school for years happened to have a coach who was a great greco coach.

That coach while no longer there, was replaced by a good, coach who also has a decent Greco Backround.
That area of NYS also has a fanastic greco club called the mohawk valley wrestling club.

Its sort of a pocket , a micro sized pocket of Greco Roman, sort of the same way that some parts of Michigan are.

Kid has all the tools, lets see what a few years of hard work and stepped up competition do.

so are those kinda throws and transitions learned in greco roman? how come other ufc guys don’t use them…I mean I never see any throws like this…

body and head pummeling and back arch is an every day diet in greco.

second the huge throws you see him hit , are mostly with people like Stephen Bonnar
a good solid fighter but not a great wrestler, so it might be a little one sided.

more Often Greco looks like clinching and trips- it takes allot of energy to
hit those kind of throws.

Linland if you go back and watch the old stuff, has some excellent throws.
you can see Hendo do some even with Wand in the first fight, and with some others too in pride.
with people like Randy- he turns them into trips, and uses the clinch to set up some short punches and elbows, or to just wear down the opponant , making him bear his weight.

wow awesome…always been into the standup…and these throws just amaze me! lol I will definately look at those.
Does greco roman also consist of using the other opponenets momentum to throw them…as in if they keep stepping forward, stop on a dime and throw…

I know you mentioned trips…is that also in greco? Like when Jon Jones had the guy coming forward and kinda stepped to the side and tripped him.

Gonna take a look at those vids you said, and check up some other greco stuff. Thanks kmc

In Olympic or other international competition you can only attack the upper body, ( not strikes obviously)

you can not use your legs, or attack below the waist - so it is almost entirely upper body throws,
torso, arm, head thats it.
all your lifts from the mat- have to be clasped about the body the torso not the legs.

in freestyle, you can do most stuff, including attack the legs.

In MMA none of those rules exist so you can apply techniques differently, like trips from the clinch.
its different from other wrestling in that your more upright too- closer to a boxing or other striking stance
then most grappling.

In most throws, you are using your opponants momentum to your advantage, same with judo- thats sort of a simple way to explalin it.

Awesome man. what do you think would be the best to master? greco, judo, bjj? I am always constantly working on my boxing and muay thai…I know I have the strength, agility and speed for wrestling. Just as I do with standup…not completely sure what would be the best to learn. Your thoughts?

[quote]rasturai wrote:
Awesome man. what do you think would be the best to master? greco, judo, bjj? I am always constantly working on my boxing and muay thai…I know I have the strength, agility and speed for wrestling. Just as I do with standup…not completely sure what would be the best to learn. Your thoughts?[/quote]

While speed, agility, and strength are great, the only attribute that every wrestler truly possesses is willpower. Learning to wrestle at once the greatest and shittiest thing in the world. If you’re starting late as I assume you are, it would be hard to get anything beyond a few basic takedowns and whatnot (which is still great, im not discouraging it,) but, in my mind, jiu jitsu is the way to go if you’re getting into grappling after twenty.

Really…why is that? I just turned 20 in late October. I’m just curious because I believe if you are naturally a good athlete and can pick up on things quickly then there’s no limit. I’m the type of person who believes that you either got the fighting moves or you dont. What I mean is that some guys pick up on sports so damn fast and they don’t neccessarily plateau like others. It
It’s just the fighting groove, it feels completely natural to put moves on. Thoughts?
I mean to start jiu jitsu that’s no problem of course…I did a little bit of Judo when I was a young kid but that’s about it. I also did a little bit of grappling and what not but got my elbow fractured at 16. 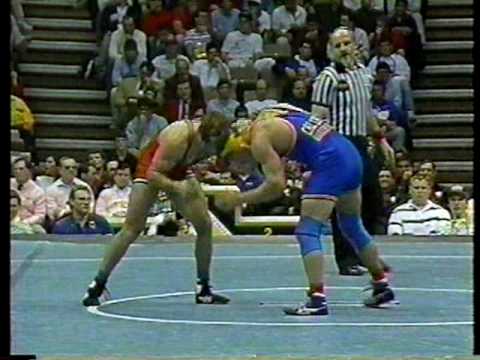 been watching lots of these wrestling videos…what’s up with all the illegal slams…wow.

ASIDE from that…this has got to be the BEST and FUNNIEST slam I’ve ever seen.

and, Jones has an insane reach…like 84" inches or something. i remeber one of the anouncers saying he has the longest reach of any current UFC fighter…

Slimjim - I was also going to mention GSP…not that I do not believe what you said about the wrestling thing, it could very well be true…but a guy like GSP as well started wrestling very late with no background really, and he’s one of the top now.

[quote]rasturai wrote:
Slimjim - I was also going to mention GSP…not that I do not believe what you said about the wrestling thing, it could very well be true…but a guy like GSP as well started wrestling very late with no background really, and he’s one of the top now.[/quote]

yup…actually, he’s prolly the best in MMA (not neccessarily in straight wrestling, tho).

No offense, but I’m pretty sure GSP’s the exception, not the rule.

It would take him just as long to be a proficient wrestler as it would a good bjj player. GSP is the exception with wrestling and there are people like Shaolin and BJ Penn in bjj, similar to GSP in that they became good very fast.

However someone like Nate Quarry didn’t do any sports until he was 24 so it’s possible to develop decent skill at an older age.

[quote]WhiteFlash wrote:
No offense, but I’m pretty sure GSP’s the exception, not the rule.[/quote]

This. Plus GSP trains full-time, professionally. That is what he does, day in day out. If you can commit to fighting and training full time then learn everything.

From a strictly wrestling standpoint, I wonder how GSP would do in wrestling competitions…honestly I think he would be okay, but get mopped by a lot of guys on an international level in strictly wrestling. It is his transitions in MMA that facilitate his takedowns (combined with his speed and strength.)

I guess a bit of my negativity in this regard to starting wrestling after no high school experience, is that I used to wrestle on a club team here. We’d get guys every now and then (especially when MMA got big) who wanted to come in and learn, and we took them. None of them lasted more than two months.

I shouldn’t have commented about it without knowing more about what your interest/intent is, but, from my perspective, jiujitsu is the way to go. Most jiujitsu places have at least one wrestling class every week where you’ll get exposure to takedowns, and the overall atmosphere is a lot more conducive to learning once you’re out of high school…there’s a lot of learning through straight up punishment that you are exposed to in school that you wouldn’t be willing to put up with afterwards.

Looking back, I know I couldn’t do now what I did then if I were to go back in time…too old, too independent, too lazy. We have hard days at jiu jitsu every now and again where 99% of the class is like, “holy shit that was a hard workout,” and the 1% of us who wrestled are like, “meh, only one dude puked.”