damn she’s good looking too, at least from what i can see in the video

Highest wilks in the competition regardless of gender… FUCKKKKKK

Always amazing to see her lift. Her bench is baffling to me considering her build, structure and technique.

just look at the torso of this lady 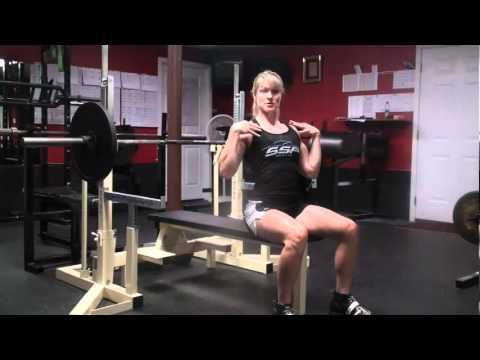 [quote]zombiec wrote:
just look at the torso of this lady

Oh, she def. has a nicely muscled upper body. I’d just expect a person with her proportions/arm length to have to make up for them with even more muscle mass than that in order to bench 300. Or more fat or something.

That’s part of why I’m so amazed at her bench.

She pulls wide sumo with not much ROM so there’s no big surprise there. But she doesn’t arch much at all on the bench and it looked pretty much like bodybuilding technique (elbows flared completely or nearly so, bar parth) from the angles I watched it at. Wide grip sure, but she’s not really trying to reduce her ROM to the minimum the way others do. Awesome bench all around.

Here is some more video from the Arnold

[quote]zombiec wrote:
just look at the torso of this lady

Supergirl. If ever a woman could wear the S on the chest it’s her. Holy Shit.

Wow, that’s impressive indeed. She looks strong but not that strong and like CC pointed out she has an incredible ROM on her bench.

I found her thoughts on bringing shoulders back and down (not news) in order to keep the shoulders out of the lift (news), interesting.
Many benchers say that focusing on shoulder strength doesn’t directly translate to bench. I guess she would be one. Others disagree, of course.

I love the bench 101 video. I’d never heard about hand spacing based on shoulder width. I wonder if that would apply to a shirted bench. I think I’ll try it out and see how it works.

She really is a great ambassador for the sport. She comes across as bright, personable and without an ego.

It looks like her pecs attach to her humerus fairly far down. Is that right? Maybe that would explain why she wanted to put all the bench load on the chest, taking the shoulders out of it.