in 1936 decided to open his own health spa (gym) in Oakland, California and encourage clients to better themselves through weight-training. He designed the first leg extension machines, pulley machines using cables, and weight selectors which are now standard in the fitness industry. He was the original inventor of the Smith machine.

He also encouraged women to lift weights (in spite of the fact that at the time it was thought this would make women look masculine and unattractive, an idea many people still believe is true). By the 1980s there were more than 200 health clubs bearing his name. LaLanne eventually licensed all his health clubs to the Bally company, and they became known as Bally Total Fitness. Today he is no longer associated with any gym but is still actively pumping iron.

some good things and some bad things about him

I dont like him, his Jack lalanne juicer infomercial cost me an hour of sleep this morning lol…it woke me up and I couldnt go back to sleep.

“Have you seen some of the crap they’re selling as exercise equipment now? …How about that Suzanne Somers? She should have been thrown in jail for selling the piece-of-crap Thigh Master. It just develops a little muscle on the inner thigh. What good is that? And have you seen Tony Little, the guy who screams on TV? He’s like an imbecile. He says you need this little thing to hold you while you do a sit-up. Why does the government let him get away with it?”

ok I like him a little more now lmao

Ha ha. Nice quote. Jack’s an um, eccentric fellow, but ya gotta give him respect for his accomplishments. The guy walks the walk and his fitness feats are pretty damn legendary.

I love that guy. I remember watching his tv show back in the early 70s. Feisty little bastard. He lives because he WILLS to live. lol

Chuck Norris has nothing on Jack. Well, maybe his roundhouse kick.

Yes; he is eccentric for an old guy
but as said before he walks the walk.
Also got to admire him for as sharp a
memory he has. I’ve met him a few times
an he always remembers my name an ask
me how training is going. I’m sure he has
met quite a few people in his proffesion
an to remember a no-body like me speaks
volumes of him.

I remember loving to see re-runs of Jack’s TV spots as a kid. The ‘face exercises’ were the best!

"other people work at dying, i work at living ! "- jack lalanne 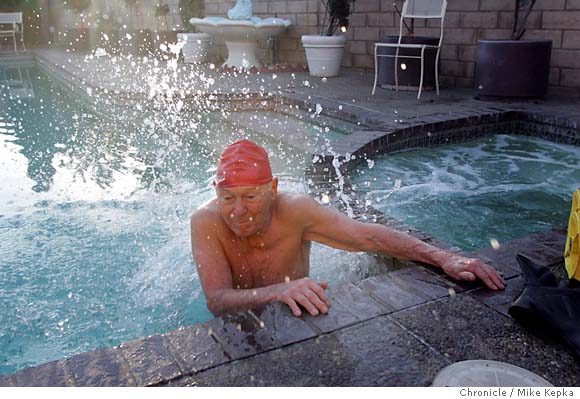 In a red swim cap and a tiny blue bathing suit that a man seven decades his junior might feel bashful about wearing, the eternal fitness guru -- the original fitness guru -- is busy splashing away in a hot tub next to a lap pool. All this under his...

Read a quote from him somewhere…

“Don’t eat anything that comes in a box” -good advice from Jack.

He is pretty awesome.

Saw an interview with him a couple of years ago. His two sons are both out of shape fatties, so they won’t be carrying on the legacy.

[quote]Christine wrote:
His two sons are both out of shape fatties, so they won’t be carrying on the legacy.[/quote]

[quote]Xeneize wrote:
Christine wrote:
His two sons are both out of shape fatties, so they won’t be carrying on the legacy.

I thought so too. I was pretty shocked at just how unfit they were considering who their father is. And they didn’t seam to care either.