Is WS4SB Enough to get Explosiv for an Athlete?

I want to know if you think ws4sb with the basic 4-day template (maybe with a DE upper instead of REP) will be enough to get very explosive as an athlete?

I know someone will suggest olympic lifts and there is a great discussion but I want you opinion about ws4sb.

Or maybe it is possible to change some lifts or so to get better results. Of course I want to be strong, but I noticed that I got a little bit slower, but it could also be an illusion…not sure.

A 3-day template would be perfect for my goals, but I don’t know where to put all these excercises.

I want to be as fast as possible in my lower and upper body and of course as strong as possible so ws4sb is great, but maybe I could change some excercises (shrugs → hang cleans for example).

Would be great to hear your suggestions.
Or maybe another great workout?
thanks

What are you goals? Why do you require the explosiveness associated with olympic weightlifting? What kind of athlete are you? These are questions will help to answer your question.

and I’m lifting since 4-5 years

I’m not sure if I need olympic lifts, but maybe they will help me more then the other excercises of ws4sb?

Do you know how to perform cleans and snatches? Is there a time frame involved?

As a stopper, you need to be massive enough to bully opposing players in the box, but remain agile enough to come off the line, claim crosses and make saves.

WS4SB3 is perfect in this regard, just make sure you follow through with the mobility work ( http://www.defrancostraining.com/ask_joe/archives/ask_joe_08-10-03.html#question04 ), which footballers are notorious for skipping out on.

If you don’t know how to perform the olympic lifts, skip it. They require a certain level of techincal ability and strength to be effective ( http://www.defrancostraining.com/ask_joe/archives/ask_joe_04-10-10.htm#question02 ) and IMO, the DE day jump drills will make a bigger impact on athletes who aren’t olympic weighlifters.

IF however, you do decide to include them, cycle them in as an ME lower body exercise ( http://www.defrancostraining.com/ask_joe/archives/ask_joe_07-05-18.htm#question06 ).

I’m no expert, but I think that for a goalkeeper, just getting strong and doing some O-lifts will be fine.

I dinn’t know these articles. thanks

Edit: there’s no time frame. I do it regardless if off oder inseason but I adjust my workouts to my soccer (legs most time)

Not too knowledgible about the westside stuff. But for over all athletic development, which seems like something you would need as a goal keeper, the O-lifts would seem like a good addition.

But as mentioned above, it would be wise to get coaching for the lifts. In the initial stages, frequent coaching and instruction of the technique is a must. After the introductary phase (dependent on person to person), you don’t a coach monitoring your every workout, consistent advice and weekly monitering of form and progression would be suffice.

If you like DeFranco and his methods I would recommend you pick up his DVD Super Strength. It pretty much breaks down his training methods for his athletes.

Olympic lifts are great for explosiveness. They also are hard to learn for some and time consuming. Can someone get explosive without “O” lifts? Yes. 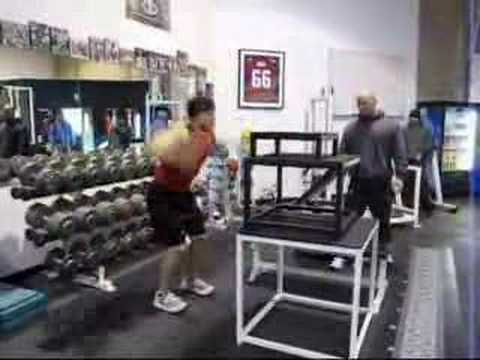 But you can also get explosive with them. You decide.

I got his DvD and everything is well explained, but I think I have to change some excercises to fit better for a goalkeeper.

Now, I have only 3 days for my workout so I have to change Defrancos 4-Day Template. And this is the point, where I thought of Olympic Lifts because I don’t have the time for 2x ME and 2x DE days for the whole body

[quote]Exitus wrote:
I got his DvD and everything is well explained, but I think I have to change some excercises to fit better for a goalkeeper.

Now, I have only 3 days for my workout so I have to change Defrancos 4-Day Template. And this is the point, where I thought of Olympic Lifts because I don’t have the time for 2x ME and 2x DE days for the whole body :/[/quote]

If you learn them correctly I would say go with the Olympic lifts and varations of. You could start with just the pulls if you are uncomfortable with the catch. Majority of the benefit of the Olympic lifts come from the pull anyways.

As for your split you could set it up numerous ways. All depending on your individual strengths and weaknesses. For example:

Workout A: Upper ME
Workout B: Full DE
Workout C: Lower ME

or even a 2-Day split if you are really limited.

And obviously you would also want to add in your accesory work and some repetition work depending on your goals.

Do you have a sample workout for Full DE and Full ME?

[quote]Exitus wrote:
Do you have a sample workout for Full DE and Full ME?[/quote]

This is an example of how I may structure a sample workout:

Depending on time I would also like to incorporate some more lower body in on either day. Some bulgarian split squats, lunges, single leg squats, etc.