Is this How to Power Clean? 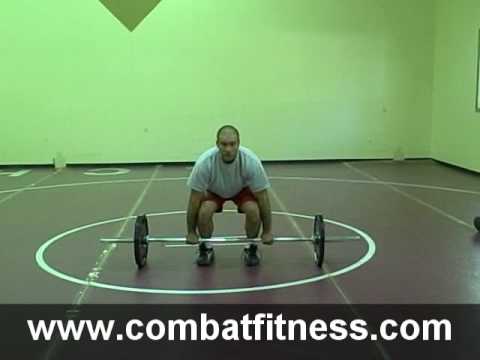 sure why not. Better than most I’ve seen.

Not bad at all. The real test is whether the technique holds up when there’s some weight on the bar.

[quote]PB Andy wrote:
sure why not. Better than most I’ve seen.[/quote]

Yeah not bad at all.

i have problems doing front squat and the top bit of this movement, i have fairly big shoulders so i dont know why i cant seem to get the bar to sit on them with bending the crap out of my wrist…so i find it hard to stick my elbows out in front like that.

is that some stretches or stuff i can do to combat this?

I love the lift. But my technique is not very good. From what ive found people with good mobility and flexability in the shoulders, gurdle and arms can make a parallel surface for the rop of the movement to catch and hold the wei gh t. Same with front squats.One disadvantage can be if you have bigger arms and/ or shoulders ( big biceps) literally get in the way and interfere with the flexability upwards to get parallel. I have 18" arms and cannot get a parallel surface for the life of me.

I catch and hold the wei gh t most in my hands. Technically wrong and grossly effects the wei gh t I can move. Look at most olympic lifters who perform these lifts. Tons of speed n explosion. Perect technique and usually smaller uper body and arms. Just my experience so far.

It’s stretching and not big biceps. You are simply tight in the shoulders/ wrist/ elbows.

That guy is STACKED. He is tall.

Rack bar across shoulders, lift one elbow at a time, do the other. Repeat other. Repeat for 20-25reps. Becareful don’t just wrench your shoulders up. Do it slowly. Try for a bit higher each time. Do this EVERYTIME you train at the start and at the end.

Do it with 3 fingers first, you will be able to rack the bar properly ONLY IF YOU PUT IN THE TIME IN STRETCHING OUT PROPERLY.

At the start and at the end of EVERY session.

To further illustrate Koing’s point ( and to show an awesome young lifter) here is Zygimantas Stanulis, who is HENCH and can rack the bar easily. No small upper body here…