Yes, which only further muddies the waters. (Thanks!)

My normal blood work never was out of whack over the past two decades…competing/bodybuilding…running PED etc……one run of SARMS and lipids were out of whack. That’s when he suggested CAC test.

Good article. I am deep in the middle of this–‘they’ have tried to put me on statins for years, f them.

The key is a good physician, one resistant to big pharma and the so-called Semmelweis reflex. My current physician is ‘good’ and has backed off from the whole cholesterol nonsense–but she’s old and has pretty much seen it all.

Anyway, I need an answer to a question that has been bugging me that no one seems to have the answer to: if you take a potato or a bowl of rice and put it in the fridge overnight, you get ‘resistant starch’, right?

So if you then heat the potato or rice, does the starch lose resistance?

Anyway, I need an answer to a question that has been bugging me that no one seems to have the answer to: if you take a potato or a bowl of rice and put it in the fridge overnight, you get ‘resistant starch’, right?

So if you then heat the potato or rice, does the starch lose resistance?

Yes, cooking and cooling makes much of the starch “resistant,” and no, reheating it will not make it lose its resistance.

A good book to read is The Truth About Statins by Dr. Barbara Roberts. After reading that book and doing further research, there is no way I’d touch a statin.

Also, the cholesterol factor you need to really worry about is Lipoprotein A also know as LP(a), which is directly tied to atherosclerosis. Mine was high (family history) and I cut it virtually in half through the Linus Pauling protocol of high dose Vitamin C, Lysine, and Proline.

Mine was high (family history) and I cut it virtually in half through the Linus Pauling protocol of high dose Vitamin C, Lysine, and Proline.

Mine is 6 grams Vit C, 6 grams Lysine, 1 gram Proline per day. Some people take more Vitamin C but others have stomach problems with high doses. Have to experiment and see what works!

I had a stemi with 100% blockage in the circumflex and 98-99% blocked right coronary branches while I was sleeping.

I had a lot of symptoms I just didn’t recognize or understand. Easily fatigued, I’d get this wierd cramping inside of my chest cavity, like it was the pects and serratus, just on the other side. Difficulty sleeping and bloating (retaining fluid, dyspnea).

I’m just very good at shrugging things off and not going to doctors. (That has since changed.)

Oh man. Def cardiac symptoms. Glad you were proactive and are here to tell your story. Every day is a blessing amigo. Be well.

Well, TC used to stand for Terribly Cute. Then later, as I aged, Tad Crusty. Now, however, Total Cholesterol seems even more apt.

This was a very well-written article. I would recommend to the author that he pursue discussions of ketogenic diets by Dr. Ken Berry and Dr. Paul Mason among others on youtube. Also Dave Feldman on youtube and cholesterolcode .com. Dave is a software engineer who has spent the last 7 years investigating different approaches to lipid pathways, in many ways more revealing than Peter Attia, who stands firmly behind pharmacologic therapeutics. For those whose primary care physicians are not open to more intense investigations of insulin resistance and inflammation in the development of coronary artery disease, one can order their own bloodwork through Ownyourlabs and Labcorp. including NMR lipid panels, inflammatory markers, c-peptides, and fasting insulin. Another excellent screening test is a calcium ct scoring scan, which directly visualizes the coronary arteries for calcified plaques, which develop over decades. These tests will tell you where you stand in terms of inflammation and cardiac disease.

One needs a specific diagnosis of FH based on genetic testing to prove its existence in a patient. 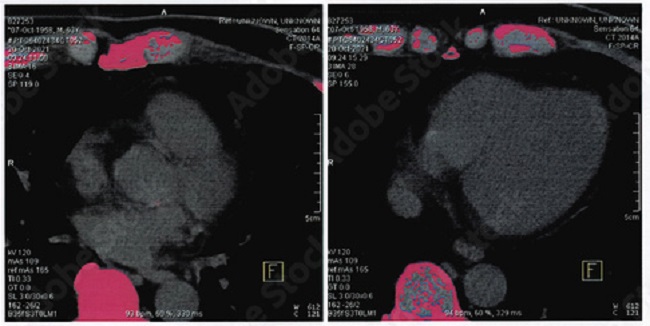 LDL doesn’t seem to be a predictor of CHD at all in people without some calcification already. It’s almost as if the LDL isn’t the cause of the problem and something else has to damage your arteries for cholesterol to get stuck in it… Who’d have thunk it?

The artwork of a narrowing blood vessel is also misleading.

My cardiologist pointed out that the narrowing of the coronary arteries happens where the blood vessels have high curvature and are subject to more stress. The straight segments don’t accumulate calcium.

This supports the argument that inflammation near a damaged segment of an artery is the real cause of CVD.

I’m 70, been worrying about my cholesterol levels, and what they mean since I was about 40. Over the years, I’ve seen the debate around cholesterol evolve as additional markers for cardiovascular risk have been identified and evaluated.

Here are my observations:

Attia seems to have gone all in on ApoB as a risk marker, and perhaps his embrace of pharmaceuticals is because these are harder to lower with diet, exercise, and life style, particularly if you are genetically cursed?

For myself, I followed my GP’s advice, and have been taking a low to moderate dose of a statin for 25+ years. (Currently 20 mg Atorvastatin or generic Lipitor). My conventional cholesterol numbers have stayed in the good to excellent range (for whatever that is worth), and I haven’t had any side effects.

I haven’t had a calcium score test yet, in part because I’m already on a statin, I watch my diet pretty carefully, get adequate amounts of exercise, and my blood sugar levels are acceptable. Conventional wisdom is that getting a high number on that test would just tell me I need to continue with my current medication regime.

As for inflammation as the cause of heart disease: clearly inflammation responses play a role in how plaque forms in an artery. But it is such a broad term, and I have little confidence that anyone has any real good data on what various kinds of interventions to “reduce inflammation” actually due to your risk of CAD.