I’m a 67 yr old male and have been on TRT using gel since 2014. For background, I’ve been weight training since I was 25 and am currently 5’9 at 176 lbs and 22% body fat. I absorb the gel really well and can get over 800 total T on just 3 pumps of 1% gel (androgel at 12.5 mg per pump). I won’t go into more detail as it’s irrelevant for my question but I just read this article on nebido and had never heard anything like this before.

I tried injections for a 2 month period back in 2016 and have never felt worse in my life although it probably wasn’t the best dosage. A physician’s asst put me on depotestosterone cypionate (Inject 0.5 mLs (100 mg total) into the muscle every 14 (fourteen) days). Total T, free and bioavailable all went down, SHBG went way up.
Anyway, I’m now going to a doctor who actually has some knowledge in TRT, as well as a colleague who specializes in it, so now I’m considering trying injections again after reading this article.
Any input on the article would be appreciated.

Your dose needs to be more than 100mg/week to have any hope of feeling good. It’s ideal to start out at 120-150mg/week for the first 6-8 weeks, then reevaluate. You also need to inject once per week at the very least.

It’s also important to do one drug at a time. If you switch to injections, you want to do testosterone only. No AI, No HCG, and stick with it for 6-8 weeks. Get more bloodwork at that point and and reevaluate how you feel and where your numbers are at.

Everybody is different. I’ve heard a lot of bad things from gels. Most guys don’t tolerate it well. It’s also expensive. If you think you can get more out of TRT, then your best bet is to try injections again at a proper dose.

The half-life of cypionate is 7-8 days, so every 14 days will have your testosterone levels right back at pre-TRT levels. Injectable T produces more lean muscle mass in middle aged and elderly men versus tropical testosterone.

My SHBG increases as well on TRT which is less common, TRT improves insulin resistance and if SHBG is supressed do to diabetes, you will more than likely see an increase in SHBG.

The T gels don’t effect SHBG much, levels peak and drop quickly which is why scrotum T cream is applied twice daily. On injections you can have virtually static hormone levels.

The half-life of cypionate is 7-8 days, so every 14 days will have your testosterone levels right back at pre-TRT levels

Where do you see data on that? Everything I’ve seen shows approx 8 days.

Maybe you’re confusing it with Test E, which has a Half-life of about 4-5 days?

A physician’s asst put me on depotestosterone cypionate (Inject 0.5 mLs (100 mg total) into the muscle every 14 (fourteen) days).

Yeah, that’s just asking for levels to be swinging all over the place. Regardless whether the half life is 4 day or 7 days, after a week your levels are probably dropping quite a bit

With your age I’m not honestly sure where you should start dosage wise (no offense), but I would at the very very least do at least 1 injection per week. I do 3x a week. It’s possible to use small (1/2") insulin syringes into your delt so it’s painless, which is nice when doing it 3x a week.

Worst case… did you have any issues with the gel? If it worked then why not continue with it?

Where do you see data on that?

T cyp and enant have comparable half lifes 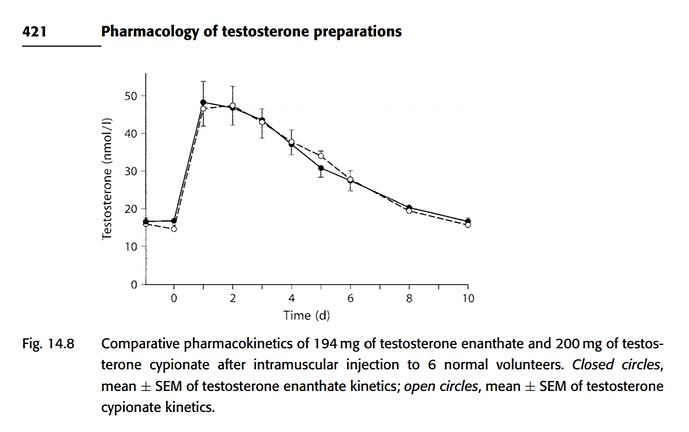 “The half-life of testosterone cypionate when injected intramuscularly is approximately eight days.”

You are quoting Wikipedia regarding Depo Testosterone’s half life. I just posted it directly from Pfizer.

Also, I’m not disputing what you are saying merely pointing out why there are conflicts. I am interested to know the final verdict here. I was wondering why Steroidcalc showed the graphs as they did.

did you have any issues with the gel? If it worked then why not continue with it?

Based on the article I linked it appears I would get better results from my weight training with the injections. That was my main interest as I’m busting my ass in the gym and gains seem to be coming along but who wouldn’t want the results indicated in the article if possible :^ ) I started back at the gym about 14 months ago after a 6 year layoff and I know I can get bigger/stronger at my age because I was a lot bigger before so I have the existing muscle cells to re-atrophy (muscle memory) so it’s not actually ‘new’ muscle I’m trying to add. Also, I’m not your ‘normal’ 67 yr old. I probably look more like mid-50’s due to great aging genes.
I can’t exactly fathom why injections would be that much better than gel, as the article states, given similar levels.

Straight from Pfizer ‘thus, testosterone cypionate can be given at intervals of 2-4 weeks’

What does their allotted protocol have to do with pharmacology? I think I see what you are alluding to but it’s a poor attempt.

Try the injections at 160mg twice a week. This should put you in a new range of what you’re used to. Switching horses without missing a beat is what you want.

I’ve seen guys hyperexcrete before where their T decline rapidly and lose 500 ng/dL in less than 7 days. I know you don’t believe that men excrete T via the kidneys, but Dr. Crilser showed that men can excrete T very quickly.

What doesn’t bind to SHBG ends up in the toilet and everyone metabolizes T at different rates.

I’ve seen guys hyperexcrete before where their T decline rapidly and lose 500 ng/dL in less than 7 days.

But the general laws of pharmacokinetics apply to everybody; 1x half life half’s the drug concentration, 2x half life lowers it to half of the half etc

You are quoting Wikipedia regarding Depo Testosterone’s half life. I just posted it directly from Pfizer.

I’m not confusing the two. I did read the studies and yes they agree with you but I don’t know why a drug manufacturer would quote otherwise. Any insight to that?

Nothing really. It just surprised me as I was reading it. I think when you look at the original intention of prescribing T, it was meant for men who literally had close to zero T from some serious medical or physical abnormality or an injury to the testes. In those cases just having some T would be hugely beneficial and a 2-3 week dosing schedule of cypionate at 200mg doesn’t seem unreasonable. The original intent wasn’t to take a population of men with low normal T and try to ‘optimize’.

The original intent wasn’t to take a population of men with low normal T and try to ‘optimize’.

I absolutely agree here. Outside of these forums I think you will still find it a common place for Endos to prescribe 2-3 week dosing schedules. I have personally observed this and honestly found a lack of complaints. I don’t think this ideal by any means but I think the progressive protocols on here, while better, are still not the norm.

Your first link explicitly states they are using Test E, not Test C. They also only have a sample size of 14 men, which is not enough to draw a conclusion.

second link isn’t measuring half-life. the study is only 7 men. they don’t state if they measured free T or total T or both.