Makes for a decent peak though

Triceps suck too, not only are they badly inserted, both insertion points differ from one another, so they aren’t shaped evenly, one is far thicker around the medial/long head, the other is more lateral head focused

They do look larger than the average mans though, that’s for sure… but not massive

My shoulders, neck, traps and lats on the other hand are the dead giveaway… I’ve had guests (within medical profession) at my house once or twice bring my parental guardians over and say “is you’re kid using anabolic steroids”… god dammit sir, if you have something to say to me ask me to my face, I’m honest if asked and treated respectfully… unless it’s other kids asking… because then it’s always “so… can you get me some”

I can fit 2-2.5 (not three) fingers between the bicep and insertion point when my arm is flexed at a 90 degree angle. I think this is actually considered above average, but not elite or anything.

Sergio Oliva had the craziest insertions I have ever seen. His just seem to go right from upper arm into the forearm with about 1/4" of tendon. 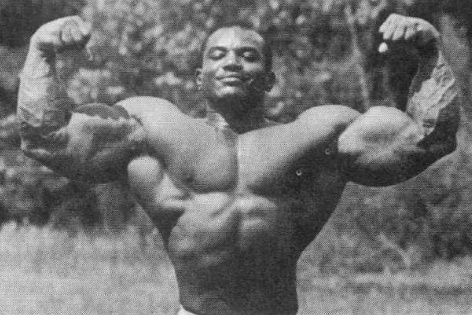 I think my triceps are a bit worse. They seem a bit high to me.

Pffft does he even LIFT

I guess he was never a believer in dieting very seriously, and trained under a tree for a long time. He is Cuban, and I believe he defected during a weightlifting competition (I could be wrong on that). Eventually, he did join a gym. He beat Arnold in an Olympia, then Arnold became Weider’s boy, and they found reasons to exclude Sergio from competition.

I believe his son (Jr) is an up an comer in BBing.

And yes… they are genetically superior, flex wheeler has even been documented within literature to have a myostatin inhibiting disorder. But don’t expect me to seriously believe you were 6 foot, 230 and 6 percent BF all natty without any supplements, AAS and you trained two days per week doing only bicep curls with 10 pound dumbbells…

I heard an interview with Lee Priest in which he said his highest dose was 350 test 350 deca a week. I am like LOL. I think that what you say about BBers downplaying their drug use is absolutely true. In some cases it is 10 fold what they say.

I do believe the not being that into dieting, and working out under a tree. Also it is a fact that he beat Arnold in an Olympia, and was not allowed to compete the following year. Arnold coincidentally started working with Weider in that timeframe.

Sergio was definitely on the drugs. Probably ate better than almost everyone, and probably trained his ass off.

They were all on drugs, after say the late 40s came about i think you’d be hard pressed to find a competitor that had never experimented with them

Even in the early 40s, late 30s, test prop was commercially available, it isn’t entirely unfeasible to think it was used to enhance performance at the time… methyltestosterone was also available around that time

Test suspension was available (scientifically, but not as an approved medication) in the mid 30s, but understandably due to short HL there wasn’t much of a market

Methandriol was around in the 30s too

Y’all just had to mention bicep insertions. Of course I googled them, found out that I have the absolute worst bicep genetics ever. Not only could you land a 747 between my bicep and forearm, but there is ZERO peak. I fuckin hate my arms.

There is a test for triceps. You measure from your elbow point to the inside of the horseshoe, and that distance tells you about your insertions. It is less accurate because you assume that the two other heads are similar to the one you are measuring, which is not always true.

My triceps refuse to grow as well. Horrible arm genetics or I have no idea what I’m doing. I’m sure it’s a combination. Really frustrating though. I can see change and results everywhere else except for arms. They just won’t change or do anything, at all.

What about frequency for you?

arms are my strong point, I can get one finger in between my bicep and forearm when tensed. I feel good.

Your arm has to be at a 90 degree angle for it to make a judgement off of it. I can get to 0 fingers when the inside angle is at 45 degrees. I am at a loose two finger at 90 degrees, for sure can’t get three.

So Sergio’s arms in the picture are about 90 degrees. I just meant the inside angle (angle of upper arm to forearm). Should not matter much which side you measure from.

One figure is really good. You likely have good looking arms.

Yall have some tight buttholes… my shit loose

We all talking unflexed, cold flexed, or pump flexed for arm measurements? I always get confused but kinda considered cold flexed the gold standard. Don’t know why.

I was cold flexed.

@liverpool_96 Yeah I like that method. Although I’m jealous of anybody who has arms as their strong point. I’m with the rest of the group saying it’s my weak point. Off cycle, I’m just under 16.5” which looks decent on a shorty like me. Life time goal is only 17” but that would be killer on my frame. Larger guys like you and or @zeek1414 would prob laugh at that but hey we all got our own personal goals.