Info on My Mid-Cycle Bloodwork?

Anyways I’ve been running sustanon for 7 weeks 1 cc a week and then switched to test 450 1 cc in my nipples start to burn.
Guessing my estrogen was up, so took a Nolvadex at 20mg and lowered dose to half cc a week and plan on running half a cc of 450 once a week with masteron at 200 MG. If it continues with burning nips, I’ll just taper down and stop. There still a little sore. Not sure if I should call the whole thing off 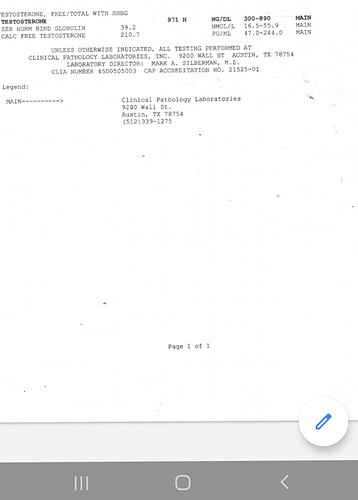 Also if that’s 450ml of test per week and your total test is that low I’d suggest something is wrong with your gear (if you’ve run 250ml sust for 7 weeks that likely just that showing on the test).

The one number that helps you suss out gyno issues, e2, is not in the labs. And as Alex said, you just gave all your personal information on an open forum while admitting to a felony. Probably want to clean that up.

Thanks, I edited it, wasn’t even thinking… I had the blood work done 4 days after my first shot of the 450

Thanks should have been thinking of that.
So to get e2 results, you got to fo a different blood test

Don’t inject into the nipple LOL!

I would consider increasing your injection frequency if you are having E2 / nipple issues. I would also consider a SERM like Nolva.

Your Test seems a bit under dosed, but you could be someone who clears it really quickly. I would say I am middle of the road when it comes to dose vs TT or FT, and I had a TT of 1223 ng/dL on 200 mg/wk pinned MWF and the bloods taken on Friday before pinning.

It should have been included in the full hormone panel. Weird that it wasn’t, frankly. But I know all these tests are offered ala carte now, so it’s more difficult than it used to be.

I had the blood test done 5 days after I started the 450 so maybe the sustanon was still in my system and not the 450.
Or maybe I just have some underdose stuff.
But I know it made my nipples sore.
A thought about injecting twice a week instead to because maybe With all these different esters in this compound that it’s kind of like a yoyo and going up-and-down by injecting only once a week

I had the blood test done only 5 days after the 1st pinning of the 450.
I should’ve waited to see what the sustanon was doing 1st .
I don’t know if the 450 would act that fast

One of the reasons I had blood done was to see if it was even doing anything, guess it is real, just underdosed

it is real, just underdosed

That would be my guess

I’d be more inclined to guess sust is still in your system, that stuff hangs around a long time and if you’ve been running 250mg per week then immediately switched to a different test then you’ve got 7 weeks of sust build up, that would put you just over range by itself which makes me think your 450 is bunk. Nipple sensation could just be from the fluctuations.

The nipple sensations just come The day after the 450 shot, then goes away in a few days.
Never had it with the sust.
Mabe thr sust if crap and the 450 put me over the edge.
I should have had my bloods checked before I started the 450 but I got impatient.