I tried changing the injection site for my subcutaneous injections of testosterone and hCG because I wanted to give a rest around my belly button.

It was totally fine until two days ago when I found myself out of alcohol swaps. I was in another country, it was late and I had a flight the next morning, I wanted to get it done before the trip.

I washed my hands, I did not have alcohol swaps and I tried to do the injections with what I had. I saw some blood and used some toilet paper to press the injection site.

Now two days later, my quad has a bruise but also a large reddish, swollen and warm area. I tried and I am now paying for it. I took some ibuprofen tonight and will see a doctor as soon as I can tomorrow.

Does it sound dangerous to you? I used to have a reddish lump on my stomach after an injection but nothing as big as today.

Sounds like an infection, you need to realise other countries carry different viruses than the environment you live in back at home. Injecting fast can lead to infection.

did you clean the site before you injected? If not, that’s a big no no.

You should have at least attempted to get it as clean as possible.

Redness, Swelling, heat, pain, pus. Those are the signs of infection.

Picture? I’m very very good at determining if something is infected or not. HA.

Outline the redness with a black Marker, like, trace the edges. If the redness keeps spreading, its probably infection.

The redness seems to calm down since I took the ibuprofen. I don’t know if I can join a picture in this forum but I’ll try. 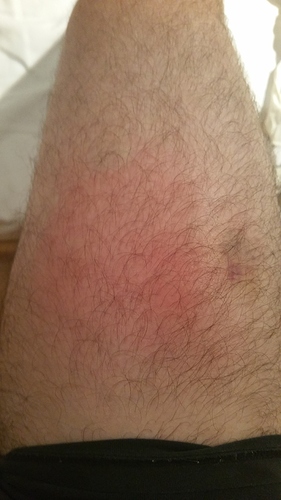 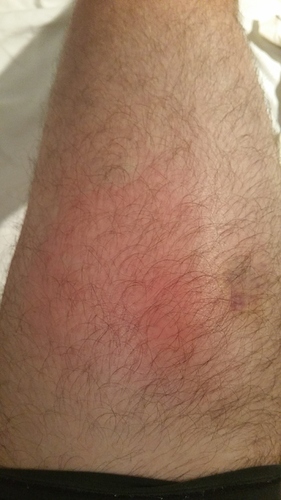 The bruise is the puncture site and you injected the oil to the left, where the redness is?

Was it subQ or im?

is it swollen? or just red? pain? if its infected. it will hurt to touch, and the pain will only get worse as the swelling continues.

I tried subQ as usual by injecting in a 40° angle. But I’m not used to quads injections so maybe I did it wrong.

I injected to the left yes.
The first one was hCG and made the bruise. The second one with T was more on the left and created the redness.

I don’t really feel pain but it’s swollen and warm to the touch.

Probably not infected. Infections are painful to the touch.

Try a warm wet rag and leave it on the area for a little bit, it should help dissipate the redness.

I wouldn’t stress unless it gets worse. If its continually getting better, you’re good.

Hi,
I just wanted to say that it started to get better after using some Ibuprofen.
I have some lipomas on my legs and I think I injected some T around one of them.

I have done another injection on the other leg. It’s reddish and a bit painful again but nothing as big as the one in the picture.