So, I had a thought, and I’m not sure if there is any knowledge or literature to back up or refute it, but there’s some smart mf’ers on here that may know.

This pinning frequency is due to using NPP along with Test C. 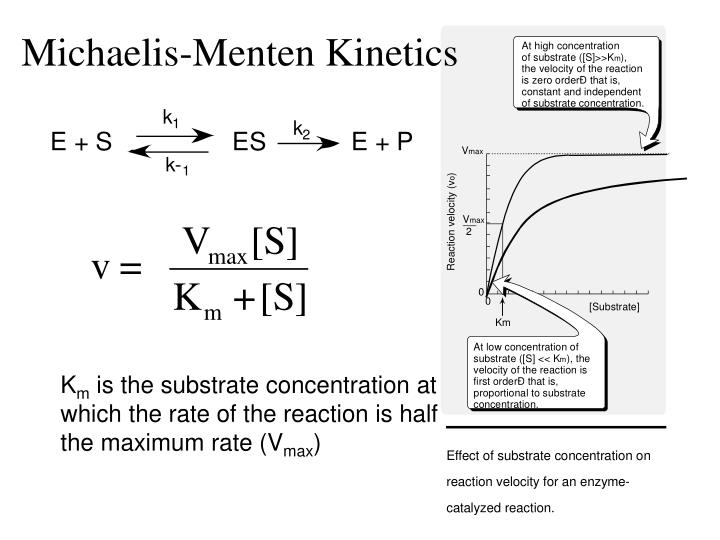 That’s the Michaelis Menten kinetic which applies to many enzymes including the aromatase. You can see there’s an upper limit which is the maximum capacity the enzyme molecules have to produce the product of the reaction. It’s measured in product molecules per time unit which is Vmax. Then there’s the x-axis which shows [S] which is the substrate concentration and is measured in molecules per volume. So you can see: the higher the substrate concentration the higher the velocity until the enzyme capacity is reached (Vmax).
This answers one point of your question: With higher testosterone (the substrate) there will be a higher conversion rate to estrogen (v comes closer to VMax) and estrogen rises.
One important point to remember for later: Vmax depends on how many enzymes you have,more enzymes means higher Vmax. If you got more enzymes then more substrate can be bound and can react simultaneously.

Now it gets more complicated. Km is the Michaelis Menten constant which is a constant value for a specific enzyme, it’s defined as the substrate concentration at which the enzyme velocity is at half Vmax. So the enzyme is at half the speed it could go. You can see if Km is higher then the enzyme is less efficient (the binding of the substrate is loose) because you need more substrate to get to half the maximal speed. If Km is lower the enzyme is more efficient which means the enzyme is faster relative to its maximum capacity. This is important to know because inhibitors get described through their action on Km.

Now let’s look at the inhibitors:

First there’s competitive and noncompetitive AIs.
Noncompetitive inhibitors bind the enzyme irreversibly (not necessarily always but in this case, sometimes they just bind to another part of the enzyme), this means the enzyme is dead (suicide inhibitors). In our example this is exemestane. Exemestane’s effect on the kinetics is a reduction in the number of enzymes since bound enzymes are not active anymore and can’t be reactivated. This means exemestane lowers Vmax but Km stays the same, so the curve’s upper limit decreases. Hereby in our example E2 gets lowered by lowering the conversion rate through lowering the number of the enzymes.

Competitive inhibitors like letrozol/anastrozole compete with the substrate at the active center of the enzyme and are often more efficient at binding to the enzyme which leads to the ousting of the substrate testosterone. The enzyme stays active though. Now if you increase the concentration of testosterone, it can displace the inhibitor again since more molecules T compete with the AI. From a kinetics standpoint this results in no effect on the number of enzymes (Vmax stays the same) but in a need for a higher concentration of T ([S]) to reach the same conversion rate (v). In other words: the concentration needed for reaching half maximal speed is higher (= Km increases)
or put simply, the concentration needed to get the same amount of E2 increases. So competitive AIs decrease E2 by decreasing the binding efficiency to the set number of enzymes.

This is illustrated here:

To answer your question now:
If you are using a constant dose of a competitive inhibitor like anastrozol (slower curve in the picture) and you are giving the enzyme more substrate (test) then you are going closer to vmax which means there will be more estrogen in the same time span. This is good! Since you want to increase E2 proportionally which should roughly happen since you are still on the same curve with the AI (curve is partially nearly linear). It could be a bit off because the rate increase is not really linear which means you could need a tiny bit more or less AI. The probability for a competitive AI to be in the linear part of the curve is higher.

If you are taking Exemestane the game changes since you lowered the upper limit which means if you tripple your T dose and that should triple your plasma levels (it won’t triple it but for the sake of the argument we round up), this nearly always puts you at a 100% capacity (except if you had a very low starting point). Which kills the practical near linearity of the curve. So in my opinion you could need less Exemestane on cycle to feel optimal.

Disclaimer: This is a purely theoretical perspective. 1. It’s not clear if the relationship between E2 and T should be proportional to feel optimal.
2. It’s not clear where you fall on the curve completely depends on your body and could change the outlaid scenario completely (for example if you have so much aromatase that you are under 30% capacity on TRT)
3. The kinetics of E2 or other estrogens play a role here. Since the elimination is of equal importance to the plasma level.
4. It left out the upward adjustment of the T levels during the first weeks and I went straight from what happens at steady state.

To feel and perform optimally you need to experiment and let your body adjust to the changes and that’s what could make all of this here irrelevant. Cause if you are not long enough on to dial all variables in, there’s no need to overthink this.

If I was you I’d keep the AI dose the same until you reached steady state with your blast then when you’re there, see how you feel and get bloods. Then adjust a slight bit up or down. My guess is you won’t have to adjust the AI dose severely in one direction so be careful (except for you being an outlier).

7 Likes
What is TRT and What is NOT TRT
If I Double My Test Dose, Is It as Simple as Doubling My AI Dose?
Help/Advice Interpreting My Labs? Fertility After Blast/Cruise
wsmwannabe July 6, 2020, 1:22pm #3

Wow, I couldn’t have asked for a much better response.

Thanks for the insight. For now I am going to continue what I am doing and increase only if it looks/feels necessary.

I left out one thing. It could be that testosterone induces aromatase expression like it does in females. But I could not find any studies about that and I think it’s not that likely that it happens in high quantities but obviously that would make my post obsolete since vmax would get bigger.

I read something else in this study:

Tissue Physiology and Pathology of Aromatase

Aromatase is expressed in multiple tissues, indicating a crucial role for locally produced oestrogens in the differentiation, regulation and normal function of several organs and processes. This review is an overview of the role of aromatase in...

“ These findings led to the hypothesis that, in males, testosterone is a ‘pro-hormone’ that is metabolised in the brain into oestradiol, which in turn regulates male behaviour.”

I find that very odd. Maybe someone knows more about these two findings and can comment. Otherwise I’ll read up.

Interesting, I’d be keen to see what you find out about this.

Testosterone doesn’t seem to either directly or indirectly induce the expression of aromatase which makes sense from all the data I’ve seen from guys on high dose T.
In this case, it would be reasonable to stipulate that the aromatase levels one has before the cycle stay relatively constant on cycle which means it’s not necessary to increase an AI substantially (but it will likely still be necessary a bit because of competition for the enzyme). I would guess that a lean guy walks around with a low aromatase activity which means he’s before or at the nearly linear part of the curve I showed above which means E2 will increase nearly linearly with test up to a certain point. I think that’s something I’ve seen in guys bloods too.

Thanks again LordGains (for some reason I always read your responses in Macho Man Randy Savage’s voice). I appreciate your thorough, research backed responses.

As of right now I am technically decreasing my AI by a minimal amount. I am pinning my test C and NPP EOD (all in one syringe so I don’t have to constantly stab the crap out of myself) and I am taking my AI (.25 mg Anatrazole) every other time I pin, just to try to keep everything on one schedule/cadence, otherwise I’ll forget or screw it up. So instead of taking 1 mg every 2 weeks I am taking 0.875 mg every 2 weeks. Oddly, if anything, I feel like the minimal sides I had (a little excess acne) have already decreased just since Friday, 5 days ago. Maybe this is due to more stable levels of test in the blood? Or placebo? Or it’s all in my head? Who knows. It’s still to early to tell at this point.

It must take a long time to read then and simultaneously touch you emotionally! Haha

Maybe this is due to more stable levels of test in the blood?

To answer this I would have to know how long you’ve been on. If since Friday then that is not the reason. Maybe because of the specific hormone ratios right now. You’ll see if it holds up.

One another note:
Is your competition already over and how much did you lift?

Well I had one competition back in early June, but I have another coming up in October. I compete Under 105kg (231.4 lbs)

I’m not sure how familiar you are with strongman, but it’s not necessarily about who lifts the most weight on a single lift, more often than not it’s: how fast did you move the weight or how many reps did you do with the heavy weight.

There was some very solid guys I was going against that made me earn my placing for sure. The win at this competition got me a bid to the national level competition in October, and now I am prepping for that competition.

At the previous competition in June I was on TRT w/HCG only (which kept my test levels right around 1100 on avg.) My TRT is legit, I was doing everything I could to naturally raise my test levels and still tested at only 330 on a scale from 270-920.

If you are doing Strongman, why are you using an AI at that dose? Is it concern over breaking out of the weight class?

Partially, but I also feel best at that dose. I tried backing it down and my acne got worse and I had problems keeping it hard. My last blood test which was the day before this blast started had my test level around 980-ish and e2 was at 33. This blood test is when running 180 mg/wk test and .5 mg/wk Anastrazole. 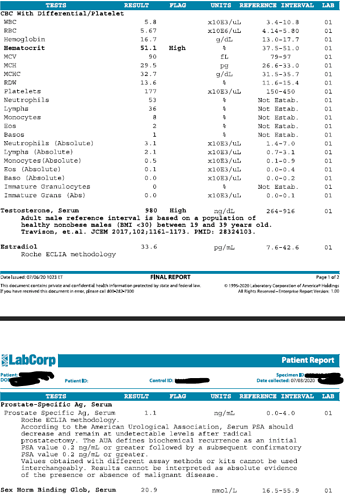 Ah my bad, thought it was PL.

That’s very solid! I’m looking forward to see what you are going to accomplish at the national level. And if you’re going to do bloods mid cycle I’m interested too. Good luck

Thanks! The doctor I go to does bloods quarterly and my next blood draw is set for early October, this cycle runs until the end of October, so I’ll post results after that test.