how long will it be before some people on the left try to defend Saddam? 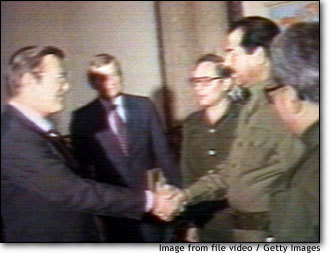 Gee, if we don’t like dictators maybe we should stop supporting them and selling them weapons?

No lympy…I mean during the trial. And just because he HAD weapons didnt mean he had to use them on his own people.
Are YOU defending his actions?

No Don/PtrDr…
I know what your driving at. Saddam was obligated to use whatever weapons we may have helped him acquire. Yes, even against his own people. The United States…NOT Saddam should be put on trial! The Iraqi people are misguided and are putting on a kangaroo court. Bush, Cheney and Rumsfield should be the ones on trial. I challenge you to watch Moore’s new movie. It explains it all there.

Geeze, what good is it to have a huge stockpile of weapons, if you can’t use them?

We see that attitude with our own military sometimes…

It appears to me that whatever drugs Saddam had pumped into him during captivity have resulted in him going totally off his rocker.

I’m going to go out on a limb and predict a guity verdict.

They won’t defend him. However, James Lileks, with tongue firmly in cheek, has offered up some likely reactions to the handover and trial of Hussein:

…
Still here? Well, there was something in the news that intrigued me, only for its utter ordinariness. Another day, another Arab tyrant handed over to civilian authorities to answer for his crimes.

You know, it happens so often we?re just blas? about nowadays, eh? I mean, tell me something new.

What matters most now is adopting the correct cynical pose about this. You have your choices:

A) It?s a show trial, indistinguishable from the trials in Saddam?s regime. Granted, he didn?t have trials; he just had people spirited off to dank blood-soaked rooms to have their hands sawed off, but in spirit it?s more of the same.

B) Oh fine great that Saddam is gone, I never supported him, but what about Saudi Arabia? Shouldn?t we invade them? Not that we should, because that would totally be about oil.

C) While of course you can?t discount the impact of having a regional tyrant put in the dock to account for his crimes, we have to consider that the means by which this was accomplished ? American intervention, for reasons that now appear suspect at worst and dubious at best, if not vice versa. This fatally taints the momentousness of the event. Is it good that Saddam answers for his misrule? Of course. Would it have been better if the Iraqis themselves achieved this without outside help? Of course, yes. But we?ll never know if they could have, because this administration jumped the gun and rushed to war after only 12 years of cease-fire violations. I say, didn?t we order the calamari? It?s been ten minutes.

D) Did we find Osama yet? Oh right I forgot, Mission Accomplished. D00d, where’s my WMDs?

E) If early reports are true, and Saddam may face the death penalty, then we have simply exchanged one abomination for the other. He should be sentenced to a term of life in prison. Iraqis need to know that the sort of vengeance personified by Saddam has come to an end in their land, and the only way their hearts and minds can rest easy is to know that Saddam remains alive, well fed, rested, observant, and waiting for an opportune moment to reenter politics, a changed and chastened man.

F) Who frickin? cares, I hate Bush. Kerry sux too

G) Let this stand for all ages as a sign of American perfidy: this regime shoots at our planes, violates its treaty obligations, diverts humanitarian aid, corrupts the international organization set up to bring relief, attempts to kill our ex-president, harbors terrorists, models its society after Stalinist models, and after ten years of this shite, in a we destroy the regime and turns its godfather over to his countrymen for trial. That?s just the sort of evil in which we specialize.

Take your choice. Wallow, if you will, in this day of shame. Saddam is going to stand trial ? and Bush isn?t. Truly a world turned upside down.

I have an idea what will happen: The left will accuse the Iraqi judicial system of being illegitimate and will say that the US is running the prosecution of the trial! Thats the slant CNN is taking. And I couldn’t take much of them!..ssssnnnooorrre…

Find the bastard guilty, kill him, and lets be done with it.

Tme…its about time you came out of the closet bro!hahaha!! Montrose can’t post for long without you thinking homosexual thoughts…
embrace it and come on out…no one on T-mag will give you a hard time! 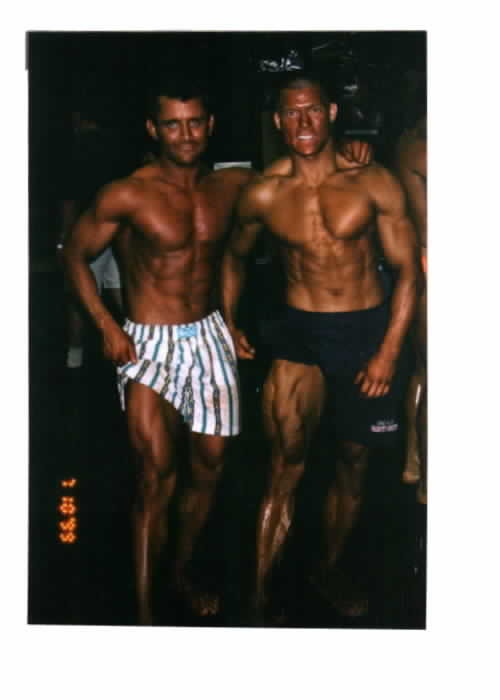 500×700 23.1 KB
You just wont admit that you two were the original inspiration for Robert Smigel. 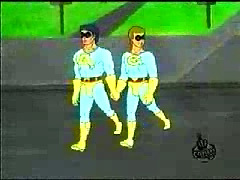 Yeah, I definitely see the resemblance.

I wonder…how long it will be before some people on the so-called right will realize that it’s possible to be against the war and hate Soddam at the same time. Shockingly, unlike our President Select, some of us actually have the amazing mental capability of being able to avoid viewing everything in absolute terms of black and white.

It’s been truly inspiring to learn how deeply some Bushies care about the Iraqi people!

Some of them seem more like Bleeding Heart Liberals than Conservatives, when it comes to liberating the Iraqis… that is, now that the WMD rationale and 911- Saddam rationale have turned up zilch.

Before Team Bush told them what to think, they wouldn’t have given a crap about liberating Iraqis.

If George Bush said “jump” these guys would ask “how high?”

In other words, they don’t actually have any real principles, they are just toeing the party line, no matter where it takes them.

Yeah Tme…we are friends…and once competed in a contest where we were in the same weight class. He won…I got 4th. Why you make homosexual jokes because of this is your problem. We are both heterosexual. And that is just the simple fact.
Whatever kick you get out of the Ace and Gary joke is YOUR kick; seen through YOUR prism of the world.
Besides…I’m one of those intolerant “Christians”! haha!

But I am flattered that you obviously save the pic I posted…You can at least see that we lift weights and have an ounce of muscle. As for you…You have never posted a pic that indicates if you are even subscribe to the tenants of this here website: namely, weight training and eating the T-man way.
Why don’t you post a photo and at least demonstrate that you even workout?

Tme’s trying to hijack the thread again…whatever…
Lumpy…your right…us military types have gassed and killed our own people right in the streets of the USA! then buried them in mass graves!

Your logic is flawless!

Why does the right even entertain a conversation with Lumpy?

Reality and common sense are not in this guys vernacular.

The few occasions when he actually makes a point are far numbered by his sensless ramblings.

So much so that it makes it not worth the effort to read his posts.

[quote]PtrDR wrote:
I have an idea what will happen: The left will accuse the Iraqi judicial system of being illegitimate and will say that the US is running the prosecution of the trial! Thats the slant CNN is taking. And I couldn’t take much of them!..ssssnnnooorrre…[/quote]

Is this a “slant?” What would it take for this not to be a “slant?”

What does CNN gain from tilting (apparently all) news to the left?

[quote]Robobrewer wrote:
I wonder…how long it will be before some people on the so-called right will realize that it’s possible to be against the war and hate Soddam at the same time. Shockingly, unlike our President Select, some of us actually have the amazing mental capability of being able to avoid viewing everything in absolute terms of black and white.[/quote]

Only some of us, though, Robobrewer! This is clearly the case here - PtrDr would like to think that because someone like myself is opposed to the war that I must then support Saddam.

What I didn’t understand then and still don’t accept now is why we decided Iraq ought to be invaded right smack in the middle of our “War on Terror” (cue music) before we found the culprit of the most awesome (read: horrible) attack on US soil…Osama was and is still at large, and we decided Iraq ought to become our priority. We invaded, declared victory, and since lost hundreds of Americans, killed thousands of innocent Iraqis, and spent billions and billions!!! Now, sentiment against the US is greater than ever, thus the liklihood of further attacks seems greater. What good have we done? I’m not sure.

Of course I don’t like Saddaam. I don’t like what he did to his people. Being the strong, policing nation we are, we ought to be consistent, then, and invade every country in the world that presides under a ruthless dictator and install a government that meets our ideals…sound reasonable?

Lumpy is textual proof of the law of diminishing returns - the more he posts, the less he says.

Robobrewer: do you have an argument outside of “Bush is dumb”? I suspect not.

As to the defense of Saddam - he’ll have plenty of it. And that’s perfectly ok with me. The Nazis had defense at Nuremburg.

As to the legitimacy of the trial and courts, I imagine that there will be an attempt to get Saddam off due to the legality of the war, etc., much like Milosevic is trying to do in the Hague.

I suspect there will be plenty of theatre - and I look forward to testimony that shines lights in many dark corners - such as the relationship Saddam had with Russia and France.

As for the infamous Rumsfeld photo - yawn. The US was a minor dealer in arming Saddam; he was largely a Soviet client. Secondly, we needed him as a buffer against Iran. Realpolitik often involves making a choice between something bad and something worse - just don’t tell the whining Left that. They pout like children unless utopia sprouts out of the ground like crabgrass in every single foreign policy decision.

The US allied with and helped arm Stalin in order to beat Hitler. Never forget that Hitler and Stalin once were allies themselves (non-aggression pact). The US did this knowing full well that it risked aiding communist expansion after WWII, but again, the choice was clear.

These kinds of messy scenarios crop up - just as it did when we chose to aid Saddam against Iran. It takes guts to make hard choices that don’t always pan out perfectly - wimps need not apply.

Saddam will be found guilty - but it’ll be a hell of a show.