How Will I Know My Regimen is Enough? Am I Just Not Made for TRT?

So your idea that high estrogen and zero symptoms in your case is invalid just like the ECLIA methodology.

Fine. My point was and is…is that you are espousing a max of about 100/week telling these new TRT users that anything over is detrimental to their health. As I said in my first post, a very qualified endo who practices what he preaches has shown that just isnt true. He also insists against AI and only uses SERMS like Nolvadex.

I never stated a max of 100mg/week, I state that it’s a good “starting point” instead of starting out at 200mg/week and then having to back down the dosage because it’s too high.

It’s clear you don’t spend much time here, rinse and repeat I see guys coming in here who were started out too high and are experiencing symptoms as a result. These guys often feel better after lowering their dosages.

You are the exception to the rule, far from the norm.

I’m not going to argue with you. I just want new TRT users to know there’s an Endo on this forum that doesn’t agree with any of your bullshit.

I’m allowed to have a my own opinion and shouldn’t be attacked for it, notice how I didn’t attack you or call BS on your point of view. I disagreed and explained why in a mature manor, you’re entitled to your viewpoint, so am I.

Forgive me if I don’t get on my hands and knees everytime an endo graces this forum, I appreciate their knowledge and contributions, I will agree with most things, but not on everything.

Having a difference of opinion doesn’t equal bullshit, to think so is childish.

I would have to agree with systemlord here. Anybody who has spent years here reviewing labs can tell you that most of the men who start on a lower dose have an easier time dialing in there protocol. I think that’s is all he is saying. I also think that all parties on here should start with the lower dose and NO AI as you never know how you are going to respond. Some guys like me, get their E2 crushed with even a little arimadex. Its hard to recover and unnecessary. Start at 100mg, get labs after 6 weeks, and adjust from there.

I apologize. You’re right. I shouldn’t have attacked your opinion. However, I still stand by my statement that new members need to know that there are opposing opinions on this forum that come from a competitive bodybuilder who is a trained Endo that actually treats TRT patients.

I also am an example of someone who has experienced the whole gamut of TRT from bio-identical hormone topicals, to pellets, to low dose test injections. Until I took control of my own treatment and got my levels at supra-physiological levels did my life change for the better. My insulin resistance changed, my focus increased, my energy levels went up, my libido went crazy, etc. Also I’m under a PCP care for general health care. I don’t have any BP issues or cholesterol issues.

Im having trouble getting in touch with my doctor to get the tests Id like to run concerning hormones and e2 sensitivity. Based on what I said, is it correct to try inputting more E2 inhibition? Im getting mixed signals concerning if its a good or bad thing. Also, what is a SERMS and what does it do?

You can get your own blood test done. I use Private MD Labs. I am able to use my FSA or HRA account to pay for them. Its important that you stay informed and dictate your treatment.

A SERM is a Selective Estrogen Receptor Modulator that blocks the effects of estrogen. They work by occupying the estrogen receptors in cells and prevent issues like gyno. Some estrogen is important for bone health, libido, etc.

You need to read everything this guy says. Here are a few pertinent posts from physioLojik

For All You AI Preachers Testosterone Replacement

Hey guys. Here’s a copy of my last e2 sensitive lab - on 600mg test and 300 mg deca a week both from the pharmacy- in week 9 Currently. My total t is over 6000. So anytime someone tells you “most guys” bullshit. Tell them to piss off. Go by how you feel and how your body responds. Focus on getting leaner and healthier. Your body will sort out the hormones. [image]

Guys - for all of you obsessively chasing only e2 - learn about e1 (estrone). What is estrone you ask? Simply put it’s a reserve for e2. When your body decides it wants more e2, it can pull e1 back to e2. Also understand the half life of e2 is about three hours. A blood test for simply finding e2 is super misleading. I’ve seen guys with mid 20 e2 and 150 e1. So the massive fluctuations you see aren’t likely AI dosing issues - it’s your body deciding to find homeostasis by swapping e1 back to e2…

There is such a huge amount of misinformation on this board about tamoxifen and it’s use during cycles. The majority of my patients use tamoxifen as their only anti estrogen. You will hear guys on here say that it isn’t an anti estrogen and in fact just competes with estradiol in Breast tissues. This is massively incorrect. Tamoxifen acts as a receptor agonist in many tissues and can control the unwanted effects of very high estrogen by competition at receptor sites throughout the body. Here is …

@studhammer wow man thank you for all the kudos!!! It’s good to feel valued here because it’s been an uphill fight haha

Not necessarily. Above is an example of a high E2 measured via ECLIA methodology, and the LC/MS/MS on the same sample came back even higher. Go with how you feel and use the lab test to evaluate changes.

Goddammit this is confusing lol.

The above example is not common and this is the first time I’ve seen results like this, rinse and repeat when guys come in higher on the standard E2 testing, the sensitive E2 testing usually always comes in lower especially when the standard test is scoring higher.

If the standard test is around 20 pg/mL then in this case the sensitive will usually be close, on the flip side when E2 is higher say 50 pg/mL, almost always sensitive is much lower.

I’m going to use the test that going to provide the most accuracy in all scenarios.

I’ve posted this and other examples and I understand your position. I’ve spoken to a researcher (with Pfizer) who actually operates both IA and LC/MS/MS equipment. I relayed her comments earlier. I also spoke to a doctor with Quest and discussed both tests, point blank asking him which test should be used, he was “on the fence”. When a doctor that works for the lab, and specializes in lab testing, discusses the pros and cons of each test and does not recommend one over the other, I think that opinion should carry some weight.

It does not appear that IA is “the wrong test”. It is another test. There are situations in which the LC/MS/MS would be better, and situations in which it would not. This is something for the doctor to determine and likely relative to the unique patient.

To me, it seems that whichever test is used, you would want to consider significant changes and specific symptoms. 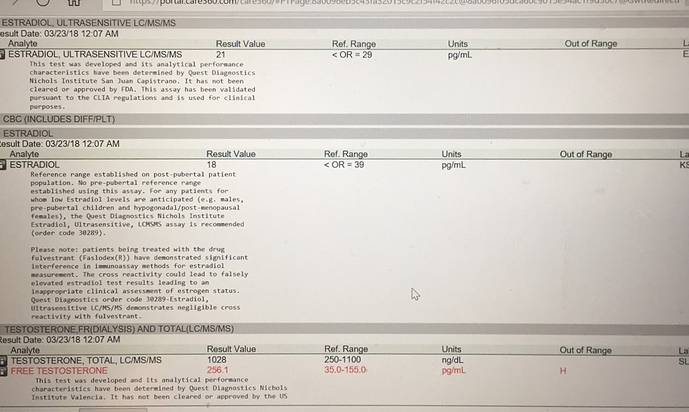 Goddammit this is confusing lol.

It can be, go with how you feel and pay attention to significant changes, which is what your doctor will also do.

Honestly I just want to understand if my hormones are out of whack. One thing that has always plagued me since puberty is what seems to be gynocemastia. Its very embarrassing as well as stubborn fat. I hope that if its e2 that might be causing this I really really want to fix it.