How to Progressively Overload on This Program?

doesn’t the program its from tell you?

Then, progress by going through the 4 week cycle again. But with heavier weights than the 1st time. 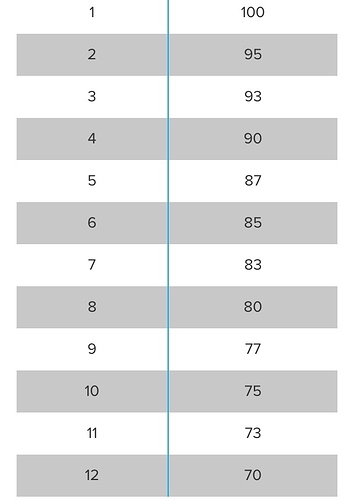 Should help. Although as mentioned earlier, start conservatively so you are able to progress.

Those were just numerals pulled from thin air. You can totally pick better numbers.

-What follows is just my opinion-

If you’re using the rep-max calculator, I would keep the projected max pretty close to the same for weeks 1-4.

Use the 4 productive workouts to drive your max up over the course of a month. Don’t try to increase your 1 Rep Max a whole lot, every week, for months.

How much weight to add month to month depends on how long you’ve been training. 10 pounds, maybe 15 tops, if you’re a young stud and you picked lighter numbers the first time. Less, if you’re more experienced. I heard Ed Coan say he’d run a 12 week plan to get 10 pounds on his lifts.

So I would keep the weights and reps so that they equal to a 1rm of about 300 the first month and on the second cycle I would increase the weights. But what if I fail one of the weeks?

Those 225x10 equals estimated 1rm of 300 don’t mean anything. That formula just allows you to gauge progress by comparing rep records. Any farther from 3 reps or so and it’s not even close to accurate.

Did you mean to reply to me? If so, I don’t know where I said anything about 1RMs or estimating them so not sure how to reply to your reply…

If you fail one of the weeks, What do you do? Is the whole thing wasted? Do you go back a week? Do you just start over?

That’s why it’s so important you pick weights you can actually lift. That’s why I said to be “conservative.”

It’s also why these programs are notoriously difficult to run/use. Everybody is trying to walk the razors edge, Overloading to BIG weights. Instead of just trying to stay in the productive gain zone.

If you do miss some lifts, don’t worry. Don’t get off track or frustrated. Just run 9-12 weeks of Wendlers 5/3/1 program. In addition to being productive, his routine will also teach you How to load. Like, how much weight to lift and how to progress the weights. This is the hidden bonus of the program. You learn stuff about how to progress. Then, you’ll be better prepared to run any program in the future.

pick weights you can actually lift

This and make small increases each cycle, like 5-10 lbs. You won’t put 100lbs. on your total in a month, but over time you will see some big increases if you play it conservatively. If you fail, you fail. Nothing is guaranteed to work on any program, just keep the same weights for the next cycle if that’s the case or switch to another program.

That said, if you don’t know how to make this program work then why not do something different?