How Long After Stopping Blast Does T Go Back to My Normal?

To be more clear than the title. Im a TRT patient for a year. Usually I take around 200mg/wk. I had extra and decided to do a blast of 500mg/wk and eat my face off for 8 weeks but then have dr. appointment 5 weeks after and am wondering what the "formula is for how long it takes for exogenous test to leave your body. After 8 weeks I will return to 200mg/wk and have 5 weeks for my numbers to look like every other blood test I have taken.

I stopped taking HCG too as I hear it raises E2 and I dont want kids so that part is welcome. I dont generally need and Ai but have some always. I had really low E2 when I began and even in the 1200 rane that I usually test in, my E2 is in the 30’s. At 500mg/wk< i havent felt the need to use an Ai.

Has anyone done this and Ive asked something similar here about 6 weeks ago and received no responses (Actually pharma forum i think) and Ive searched up and down to find a similar situation. Im sure there are TRT patients who do this and maybe I wasnt asking correctly.

I felt like this falls in TRT vs pharma as I’ve never done a cycle before and am just going back to normal trt until I have a surplus again, if ever, perhaps do it again as the results have been awesome.

I belive some wrote a post on how much trt leaves your body when you stop, wk by week but I cant find it. 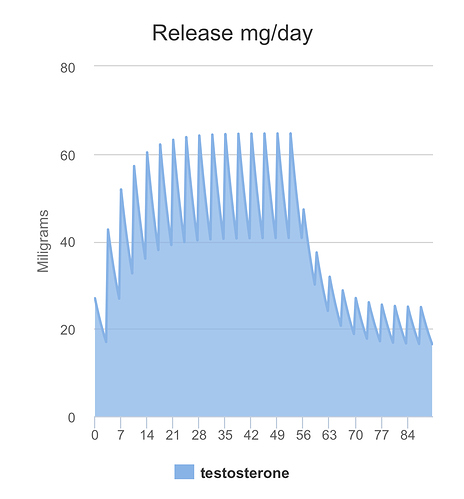 Thanks for the reply. I must admit while understand there is a general curve and the peaks and valleys, I cant 100% understand the graph completely n where that would leave me approximately 5 weeks after. I could do the math if I had one example, even if just approximate.

My Test is 1200 at 200mg/wk typically, that being e3d. I havent tested myself but I would guess based on similar reports, I may be above 3000 right now at week 6. I planned on getting tested at 45 days or so to see my peak but, really cant get it together to do so.

Can you give me an example of what my hypothetical Test would drop from first week after getting back to my original dose?

Im, not going to end early and would have loved to go 10 weeks but right now, not knowing if I will walk in and get tested 5 weeks after and end up at 2000 test level might get me in trouble with the docs. If I can figure out some round about, approximate level, then I can adjust my doses down even further and or push my appt out further.

It seems at some point I will have a concrete answer to contribute back to here based on what my results end up being.

Thanks for taking the time to give me a graph, I’m just too dense to understand it.

You’re not too dense my friend, it’s simply not a clear enough answer. Unfortunately there’s no way to determine how high your numbers go until it’s too late. But that graph shows what we can extrapolate, which is how many mgs are released daily based on the half life of the esters. From there you have to basically guess.

The safest way to get your numbers down after those eight weeks of blast? A much lower dose for the last two weeks before your test. You could also go like this

That week off could stabilize your numbers enough to get you back in range. Could. I make no promises because it’s not knowable and I’d be a fool to tell you something as fact when I have no way to determine that.

But that may be your best bet. Having a week off could do the trick.

I like I_Y suggestion. That is what I would do in your situation.
Rule #1 don’t get into that situation.
Never blast so close to your blood test / doc appointment. You need to learn to plan ahead.
Donate blood, Blood test for TRT doc, Doc appointment. Blast time. You should have 6 months to play around. Blast for 12 weeks then just go back to your normal TRT cruise until your next 6 month checkup. Rinse and repeat. IMO there is no reason to blast more than twice a year. Holding it at two 12 weeks blast there is almost no chance of gyno as long as your cruise does not have your E2 and prolactin over range. Buy your own blood test to make sure. Gyno surgery is expensive like 8 grand and good luck getting your ins to pay for it.