Our hot water heat has 3 marked settings: A, B, C (this being the hottest).

It is currently on A and hot water from the tap reads 150*, which most professionals recommend 120 since it only takes about 2 secs for 150* to cause burns.

The problem is when I turned it slightly below the “A” mark, we quickly run out of hot water and even then it’s not hot long enough to my liking.

We’ve got the same problem right now at home → had a plumbing/heating guy at my place over the weekend (doing some other repairs) & when I asked him about this, he mentioned that there’s some kind of cold-water tube that might need replacing. Just did a quick search & found this troubleshooting guide: 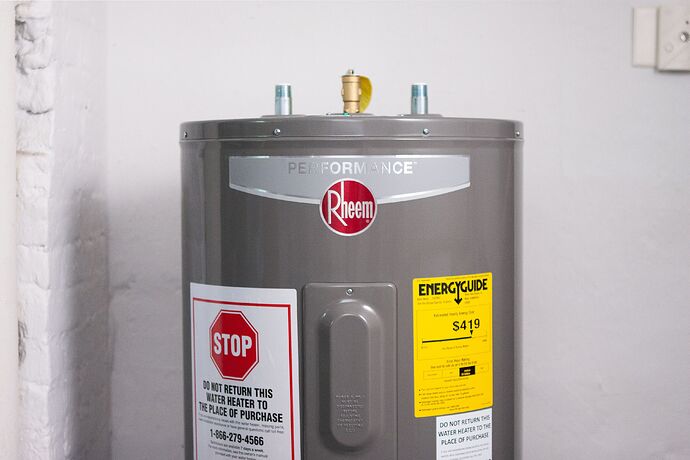 Learn how to repair seven common problems for electric hot water heaters, including insufficient hot water, leaks, and a heater that is not working.

I’m assuming he was talking about the cold water dip tube.

your tank reservoir probably isn’t large enough for your needs
if the tank is older and/or you have ‘hard’ water (dissolved solids), a substantial portion of the bottom of the tank may be taken up by scale deposits

it’s brand new (6 months old), I assume a small tank though, but it’s only me and the wife.

She usually takes a 30 min shower, and if it’s set too low she runs out of hot water.

There’s your problem my dude. If I ever took a 30 minute shower at my dad’s house he would probably throw me out on the street.

How many gallons? Sounds undersized, she will completely drain a forty gallon in thirty minutes. It could be other factors though, like how far is it from the shower, does it run through an unheated area (attic or crawl) or is the supply line undersized?

You could buy another hot water tank, and piggyback them together.

if it says that it is 220volt but inside the panel the white wire is connected to the neutral busbar where all the other white wires go, then it is only drawing 110v

yeah, I get on her all the time to take a shorter shower, don’t know WTF she does in there, but she does shave everything, on an almost nightly basis.

and it’s not a detachable shower head

Hot water heater. Anyone else see anything wrong with that phrase?

[quote]DBCooper wrote:
Hot water heater. Anyone else see anything wrong with that phrase?[/quote]

How can you heat hot water?

Anyways, about your wife’s 30 minute shower, I would also suggest getting a low-flow shower head if at all possible. That, too, might help.

I have a similar set up, gas with a 40 gallon tank and it’s set fairly low so we don’t get scalded. I have 3 bathrooms and all showers going at once at times. I’d say that everyone takes a 10 minute shower or less.

If you have a 30 gallon tank, you’re running out of water. Is your 150* tap water close to the source? That is always the hottest point and I had the same thing going with my old oil-fired system.

[quote]DBCooper wrote:
Hot water heater. Anyone else see anything wrong with that phrase?[/quote]
True, I just call it the water heater.

Maybe he could call it the Even Hotter Water Heater?

I’ve always turned up my water heaters pretty high. With that, I can shower, run the dishwasher, and do laundry at the same time with no issues.

A 40 gallon tank should be plenty for a single family.

Turn it to the ‘B’ setting. Don’t worry about scalding yourselves; you’ll be cutting the hot water with the cold anyway.

[quote]jehovasfitness wrote:
She usually takes a 30 min shower, and if it’s set too low she runs out of hot water.
[/quote]

[quote]jehovasfitness wrote:
She usually takes a 30 min shower, and if it’s set too low she runs out of hot water.
[/quote]
[/quote]

Yeah, waitaminute…is that a real 30 minutes or are you just throwing around “30 minutes” to mean a long time?

Who the fuck takes a 30 minute shower?

not exaggerating. In fact, I under estimated, she sometimes will be in there 40 mins.

^^ That is just objectively too long.

If you ever get into an argument with her about it don’t try to win of course as women are impervious to logic, but just walk away with at least the satisfaction of knowing that you’re right.